Photoshop layer styles are a popular way to add effects, such as drops shadows and strokes to layers in a non-destructive way. Layer styles were first introduced in version 6 of Photoshop, but since then, there have not been many significant updates. The new changes in Photoshop CS6 are the most drastic, and useful, since their inception over 10 years ago. In this article we will explain how Adobe has improved this popular feature. Let's take a look!

This is probably one of the most exciting new features regarding layer styles in Photoshop CS6. The layer order of the effects was changed to display the order in which the effects are actually applied, from top to bottom. Previously, you couldn't tell which effects would be applied above or below each other because their order within the dialog box was random.

This simple change makes it much easier to visualize your changes before you even make them, thus speeding up your workflow.

By looking at the screenshot below, you can tell that the Outer Glow effect will be applied above the Drop Shadow effect without having to turn both of them on to check or memorize it all in your head. 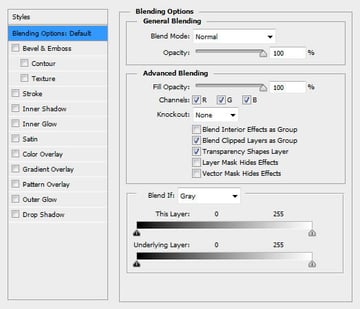 Another great new feature in Photoshop CS6 is that you can now apply layer styles to groups. This makes it so that you don't have to merge layers or create complex clipping masks in order to create certain shapes.

It can be really helpful because it provides another avenue for non-destructive editing, allowing you to go back and change something without having to recreate it from scratch.

In the following example, the shape on the right is created with individual elements that are grouped together so you can still move each shape separately, but Photoshop layer styles treat them as if they are one.

One of the most annoying things about working with a lot of layer styles is that you used to have to expand and contract the effects list for each layer individually. Not anymore!

You can now Alt + Click (Windows) or Option + Click (Mac) the disclosure triangle to the right of each layer in the layers palette to open and close the effects list for every item in your document.

Dithering has been added to both the Gradient Overlay and Stroke effects. If you have ever noticed color banding in your gradients, you can now eliminate it complete by simply checking this box. It has quick solution that has been a long time coming to an annoying problem that used to take a lot longer to fix.

It used to be a hassle to rasterize layer styles. You would have to first right click the layer and convert it to a smart object, then right click it again and rasterize it. Either that or create a new blank layer, select both layers, and then merge them together. It was not very intuitive.

Photoshop CS6 allows you to simply right click any layer with effects applied and click Rasterize Layer Style. A quick and easy one step process. You can also achieve the same thing in Photoshop CS6 by clicking Layer > Rasterize > Layer Style.

The last, and probably least useful, but much appreciated feature is a new icon for when you make changes to the layer styles Advanced Blending options.

If you make any changes under the Advanced Blending area, an icon appears next to the usual "fx" icon in the layers palette.

Photoshop CS6 has provided us with a ton of great new enhancements, and for those of you who love delving into the layer style options, they have done a fantastic job of helping us out.

The new tools and options make creating great looking styles faster, easier, and even more fun. What are you waiting for? Get out there and create some new styles!

John Shaver
John Shaver is co-founder of MyDesignDeals.com and creator of DesignPanoply.com. For more design goodness, you can download an epic design freebie bundle at MyDesignDeals, where you can get over 190 premium resources for free. Or visit Design Panoply for tips, tutorials, and awesome design resources.