Hysterical Minds is an international art collective composed of Spanish speaking artists from around the world. In its almost three years of existence, they have released nine online exhibitions focused mainly on digital media, but also photography, traditional painting, and music. Recently, the collective announced their ninth exhibition based on the twisted nature of the human beings. In this article we will present you with a selection of works from this exhibition. Let's take a look!

For the first time, the collective presented a brief that surprised most of their artists, due to its duality: on one hand there was the usual conceptual premise, from which this and most art groups use as a basis. Essence makes reference to human nature: chaotic, confusing, volatile and full of diversity, from gloom to brightness, from pale to full color.

On the other hand twisted gives that altered, spontaneous, and at times, even macabre connotation that we have focused not only as a conceptual matter, but above all, as a compositive one: You won't see any centered pieces on the canvas. The collective has been working using composition rules, such as the rule of thirds or the golden ratio, to get their artists out their comfort zone, and to offer a dynamic, narrative, polished and above all, a full of shades visual experience, which accompanied with its eclectic and evocative soundtrack, will guide you through the created worlds of these hysterical imaginations.

An art collective is not only a showcase of artwork; it is also a place to learn and to grow as an artist. One of the biggest successes of this release has been the mutual feedback, which has helped the artists to create risky composite pieces and to experiment, in some cases with perspective and visual guidance.

Challenging ourselves is the best way we can grow as artists, that was one of the things that attracted Chang to this group and specially this exhibition. Twisted Essence leaves a large space for interpretation, but in execution, forced the members to do something that they normally did not pay enough attention to. The rule of thirds allowed Chang to take the narrative of this piece to another level. The result was a more satisfying and complex piece.

This piece is about what brings people together. All over the world, people living close together are unable to establish effective connections. In this piece, you can see that people separated by a divide are ultimately brought together with art. This composition was created using the rule of thirds.

Mario S. Nevado - Trust in Me

The paranoia of impossible loves, the poisonous obsession, the promises: they're a procession in our minds, that makes us travel from the cerebral to the emotional in a stop-motion universe created by us; that doesn't exist. In this illustration, Nevado portrayed that moment in which you are able to trust in someone, knowing that is the correct path to follow, even if what you feel inside tells you to do the opposite.

The composition was based on the rule of thirds, having two items placed on the vertical visual guides (the main characters and the thin trunk). For the horizontal visual line I decided to use a slight diagonal composition created by the fire, to lead it to the main focus of the image, so you can start the narrative from there, and slowly start moving your eyes to the right to discover the whole scene, guided by the expanding fire.

We live jailed in an artificial prison, conditioned and stunned by a myriad of "things/objects" in a perpetual forced unconsciousness that overwhelms us keeping us from what we really are. That is the idea behind this piece.

This piece was an experiment to attempt to build large structures in an easy and quick way. The most fun aspect of this piece to create was the man wearing the helmet.

This piece features a dark wizard, corrupted by the greed of forbidden knowledge. But in this scene there are more interest points that work as secondary characters: the silent and menacing castle and the Moon, a cold witness. The concept is directly linked with the release title, since every essence, theoretically, pure and noble, has the potential to become obsessive and self-destructive when the blind anxiety for power comes to play. 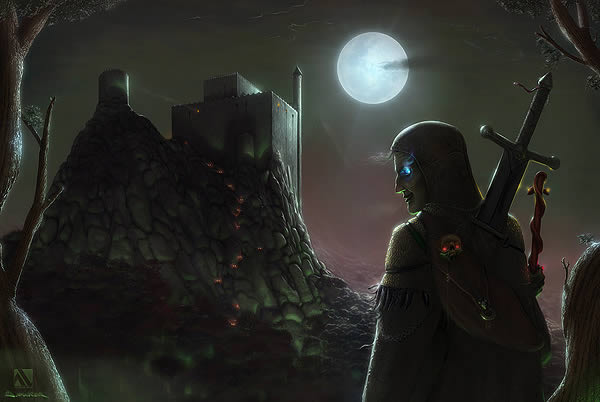 The luminous and pale color scheme of this piece takes us to an ethereal and imaginary place where the body drowns and feels weightless. The elements in this image were consciously placed meeting the exhibition's composition requirements, which helped the picture to breath and focus into the most important details.

For Lizardi, working on this exhibition was very inspiring because the theme had so many possibilities. In the end, Lizardi decided to work on a religious theme because he wanted to add a sinister and sick touch to his piece. At first, he had some problems with the composition, which ended up more centered than he expected. In the end, these problems were solved based on the feedback of other members of the collective.

The truth is just a lie that someone decides to believe. For this piece Szeiman decided to use the rule of thirds to help compose his artwork. The focal point of this piece is centered at the bottom right corner of the piece.

Sometimes, as human beings, we tend to believe that we are stronger than we really are. We believe that we can face any changes in our lives. In reality, however, we do our best to avoid these changes. What would you do if everything you think is real suddenly disappears? In this piece Rodriquez created a psychedelic representation of that feeling. It shows the intense search to escape a new situation.

This piece was created using the rule of thirds, focusing on the girl. This type of composition was completely new and unknown to Rodriguez when he began the project but thanks to feedback from other members of the collective, he was able to explore this piece's potential and create something that he could be proud of.

As Fernandez was exploring the theme for this exhibition her own twisted essence became suddenly obvious. She kept stumbling into her own insecurities and frustrations. She became entangled with thoughts that she couldn't quite get out of her head so she decided to turn them into her own self-portrait.

Being restricted can often trigger your creativity instead of limiting it. That was the case for Fernandez with this piece. Working with the rule of thirds was a very positive experience for her. In fact, without it, she probably wouldn't have been able to get the message across as well as she did. This piece was a challenge but it helped her grow as an artist.

Please feel free to view the full exhibition. You can also view Retrospectiva, a best of editorial project that gathers some of their highest quality works so far. 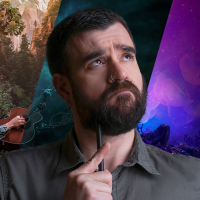 Mario Sanchez Nevado
Known as "AÈgis", Mario is an independent freelance illustrator and art director located in Spain. His often surreal, obscure and eerie work is focused on CD album packaging and design for music bands all over the world. You can discover his work on his website or follow him on Facebook.
Weekly email summary