How to Draw a Tattoo-Style Tiger With Colored Pencils

This tutorial shows you how to draw a tiger in a tattoo style, using pencils. With just a bit of patience, you can do it yourself. If you're a beginner, you can check out our series of tutorials on "How to Draw Animals", and more specifically, the one to do with drawing big cats. Pencils to the ready… let's start!

Although I am using Faber Castell color pencils, you can use your own preferred brand of pencils. I've mentioned the colors I'll be using throughout the coloring portion of this tutorial.

Draw a circle. This is your starting point for the tiger's head. Add two basic ears to the top of the circle, using the image below as a guide. I want to draw the tiger in profile view, so you will see only one side of his face. Add the snout and nose, extending from the bottom of the circle.

The sketching stage should always be drawn with light lines to make it easier to remove, so avoid pressing too firmly on the pencil.

Draw the curing, waving lines of the tiger's back. The swollen part of the waving line will be used as the tiger's shoulder. We'll add more detail later. The length of the line that forms the back should be four times the diameter of the head.

Draw basic lines for the stomach and the two front legs. The tiger should look strong and as if it is hunting, so we're going to draw one leg straight and the other bent, as if he's about to pounce.

Now to draw the tail. The tail is going to be curved so it looks as if it's in motion.

Add his back leg, and we are almost done with the basic outline of the tiger.

Now it's time to add the tiger's eyebrow, nose and mouth. The eyebrow is drawn narrowed to make it look serious. We will also add more detail to one front leg.

Now we will work on the other front leg.

2. Add Stripes to Your Tiger

Let's start adding stripes to one of the front legs. After that, add the tiger's eye, and some more detail to your basic ear outline.

Draw the crumpled lines under the tiger's eye, to make him look serious.

Lightly add lines above the mouth, where we will add his whiskers later.

Draw lines of little spots along the lines you've just drawn above his mouth. These spots will look like pores when the drawing is finished. Start to work on the facial stripes too.

Add more stripe lines to his face. Don't forget to add stripes around his mouth too.

Add the last stripes to the tiger's head. Make the stripes on the head quite bold, so that the base of the head won't mix with the stripes drawn on the body.

Now we will work on the body's stripes.

Add single lines to the places you want to stripe first. Then add parallel lines to those initial stripes to carry on the pattern.

Repeat the same steps for the rest of the stripes on the tiger's body. I also made the outline of the back leg bolder.

Draw the stripes and claws for the back leg. Erase all the sketch lines and keep the main lines.

Finish up sketching the tiger's stripes by adding some to the tail.

Now we will start to work on the stripes to thicken them. Let's add parallel lines to the base stripes drawn before, and join them at the end to close them. I have started on the tiger's tail.

Also add the curved line behind the back leg to show the fourth limb.

Let's work on closing the stripes for the body.

After completing the stripes, I noticed there are wide gaps between them. I've added more stripes to fill out those gaps.

The stripes don't have to be the same thickness throughout. In fact, it will look more natural if there is some variation.

Let's start to shade the stripes. Fill the stripes with hatch lines. Use your normal pencil to do this as we'll add color to them later.

Continue to add pencil shading to the stripes on the front leg and the neck.

On the tiger's leg, the stripes should be lighter on the top and darker below. This is to give the impression of light coming from above the tiger.

Use the 378 (Umber) pencil to add color to the leg and around the neck. It will be the lightest color we use for the tiger, so we need to add this color to the areas that would get the most light.

Add some of the color 376 (Coffee) to his face and neck, in the shading of the stripes and around the stripe outlines.

Again we will use the 376 (Coffee) pencil to add color to the stripes on his front leg. At the darker areas such as between the legs and the body, apply a few layers of this color instead of only one.

Never press hard on pencils, especially when coloring. Build up layers of color to increase the intensity. If you press too hard, the area you're working on will become shiny and it may distort the paper.

Apply the pencil shading to the stripes on the body of the tiger so that we can move on to adding color to those areas.

Now it's time to use your ballpoint pen to touch up a few parts of the tiger, to add some contrast. Use it sparingly and bit by bit, on areas such as his mouth, paws, tail, a couple of stripes on the tail, the dark area such as between the legs and body, under the ear, and so on.

The skin between the left front leg and the body still doesn't have enough contrast, so I will use the ballpoint pen to apply one more layer of shading layer to it.

Use the color 378 (Umber) pencil to add a base color to the tiger's body. At a contrast area as I mentioned above, apply a few layers instead of one until it looks as balanced in color as the head.

Repeat the previous step for the rest of the tiger. For the contours of the muscles and body, you'll need to add extra layers of 378 (Umber) as shown below.

Add 376 (Coffee) to the darker areas and blend that color out a bit around the shading area.

Add 383 (Saffron) on the whole body, leaving out some areas where the tiger would have white fur, such as the paws, under the ear, and around the mouth.

Use colored pencil 380 (Taupe) to color the feet of the tiger.

Use 314 (Orange) to apply a very light layer on the leg and shoulder area.

Use your 314 (Orange) pencil to shade almost all of the head, until it looks balanced with the coloring on the body.

Use 383 (Saffron) to fill up any part you feel is unbalanced and not blended well. This color can be used as a blending color for the tiger.

I hope you've enjoyed this exercise in creating a tiger in a tattoo style. Colored pencils are a fantastic medium to work with. Check out more of my tutorials to find more exercises with colored pencils. 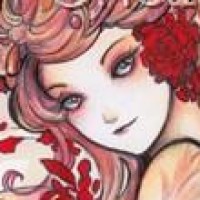 Hellobaby
Hellobaby is an artist with a passion for drawing with traditional tools, such as colored pencils and water colors.
Weekly email summary