How to Create a Social Media UFO Icon

When we design websites or user interfaces, often times we need to create unique and creative icons. Most websites these days have some sort of social media presence; with a link to their Facebook or Twitter pages prominently displayed on their front pages. With so many sites linking to their social media profiles, it's not surprising that many sites are simple regurgitating the same icons. In today's tutorial we will demonstrate how to create a completely unique UFO inspired social media icon based on a theme. Let's get started!

The following resources were used during the production of this tutorial:

Create an oval shape layer that will become the base of our UFO. 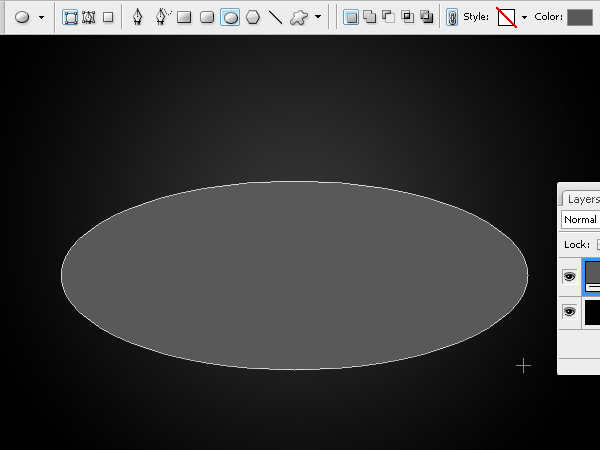 Go to Layer > Duplicate Layer and duplicate the oval but make this one a darker gray color.

Now duplicate the layer again but distort its upper area as shown below. 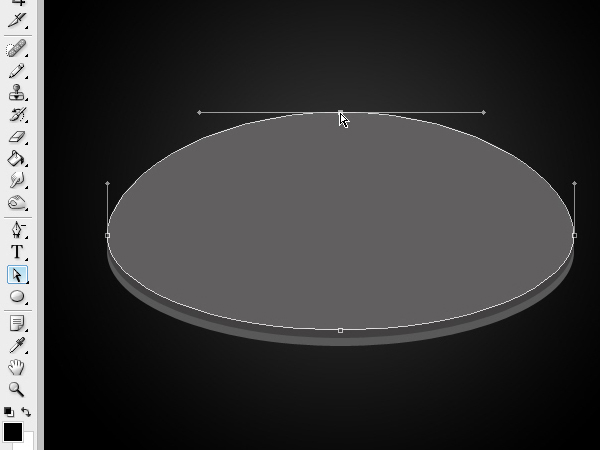 To create a polished metallic texture use an Angle and scale it up to 150%. Double click the gradient bar and open the Gradient Editor window. 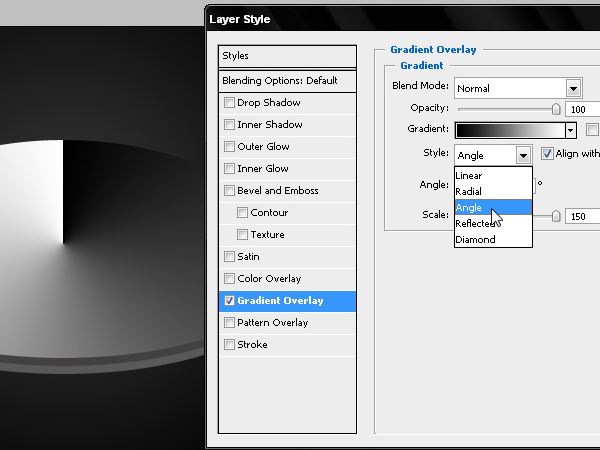 Place the center of the gradient towards the top of the shape to reinforce the conic shape of the object.

To create a 3D extrusion of the upper oval, use an inverted Inner Shadow (this means a –90º angle) with a black color and an Overlay blend. Drag the Choke to 100 and reduce the Size to zero. 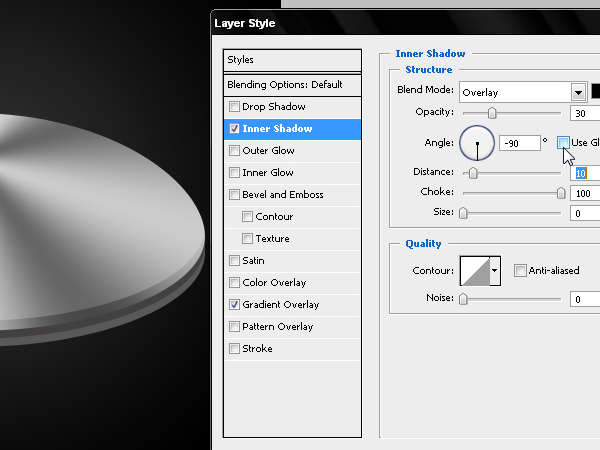 Include a thin Inner Glow that will allow the upper oval to receive the light reflected on its inner edge.

Now let's work on the central oval. Add a Gradient Overlay using the settings below and place the gradient just below the center of the shape.

Use a white Drop Shadow to simulate a glow over the bottom oval. 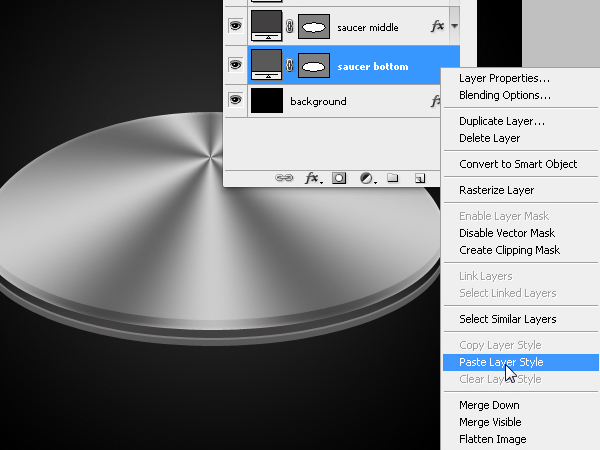 Reduce the opacity of the bottom layer's gradient.

Now we need to create an insert over the upper oval.

Apply a gradient to this layer as shown below. 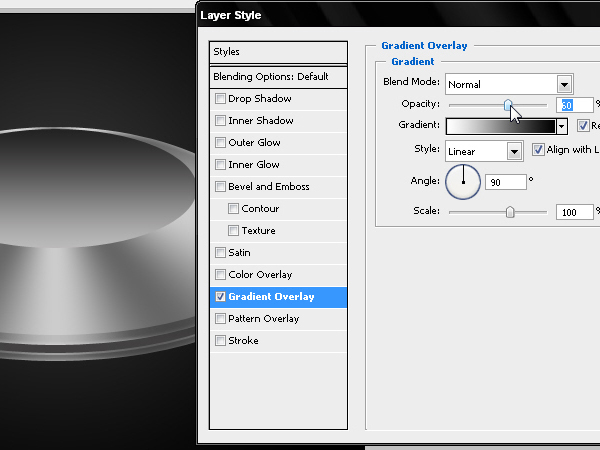 Now it's time to create a glass dome of our UFO. To do this draw a shape as shown below. Use a blue #1D408A color.

Let's add some layer styles. First, a Satin effect with the values shown below. 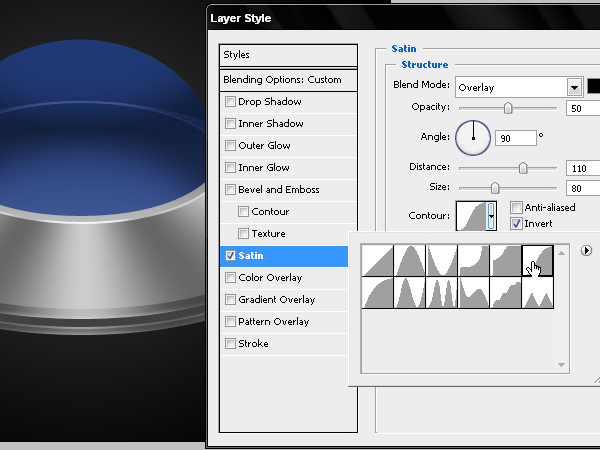 Then add an inner shadow but used as a light over the dome. Use the values as shown below.

Finally add a Drop shadow to lighten up the bottom edge of the dome. 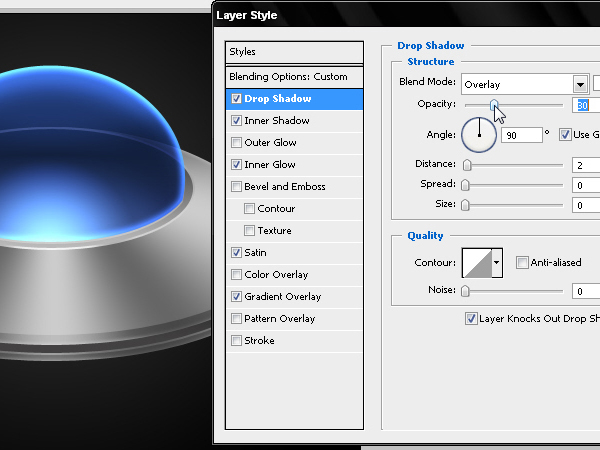 Now let's add a reflection to the sphere. Use a smaller oval and edit the anchor points as shown below.

Apply a layer style to the reflection and add a gradient that starts from #44A9FE and ends with black. Set the Blending Mode to Screen as shown below.

Add an inner shadow using the values shown below. 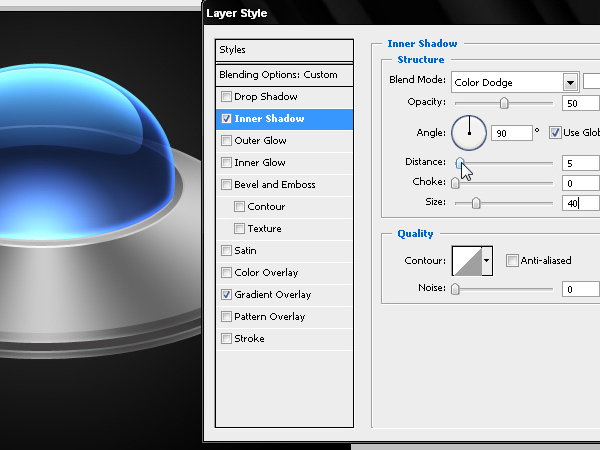 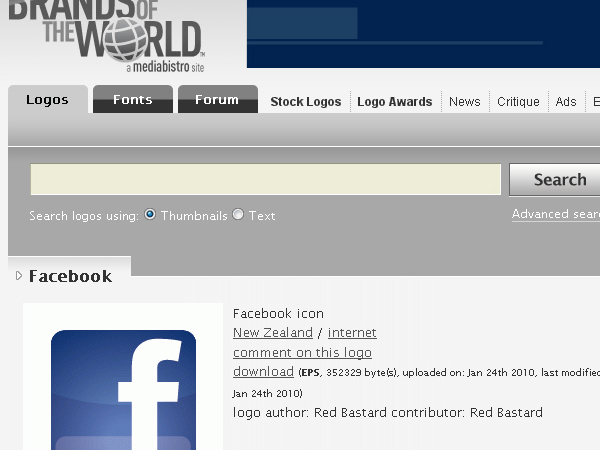 Open the vector logo directly into Photoshop. This will open a raster. 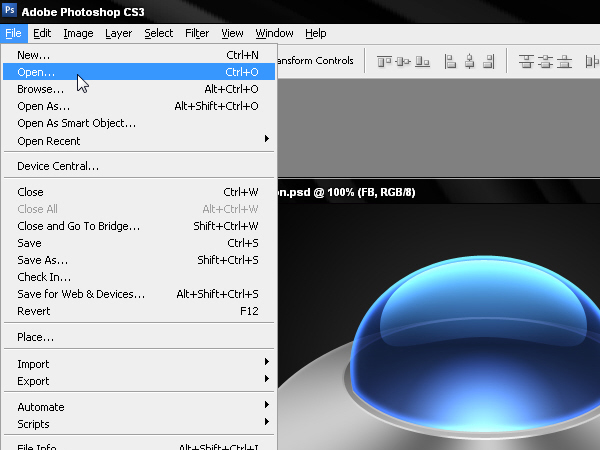 Use the settings below to set the logo to a larger size.

Make a selection of the letter "f." Once it is selected go to Edit > Copy o Cmd + C.

Paste the letter "f" onto the canvas and reduce its size to fit within the sphere.

Apply a gradient as shown below. 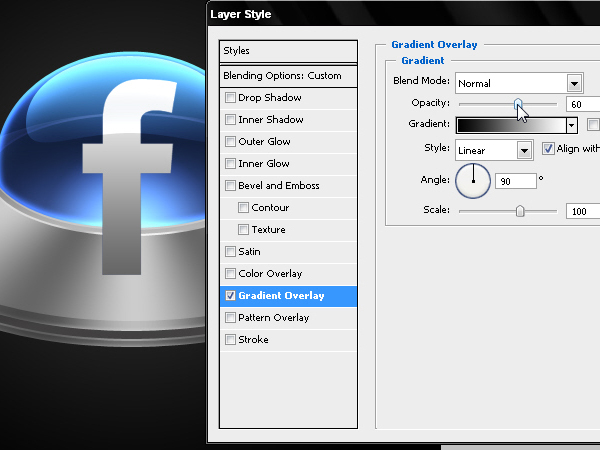 Create an illusion of 3D by adding a small stroke as shown below.

Apply an inner glow using to the "f" as shown below.

Use the dome to hide part of the "f" by selecting the path and by converting it into a selection.

Return to the Layers palette and mask the letter. 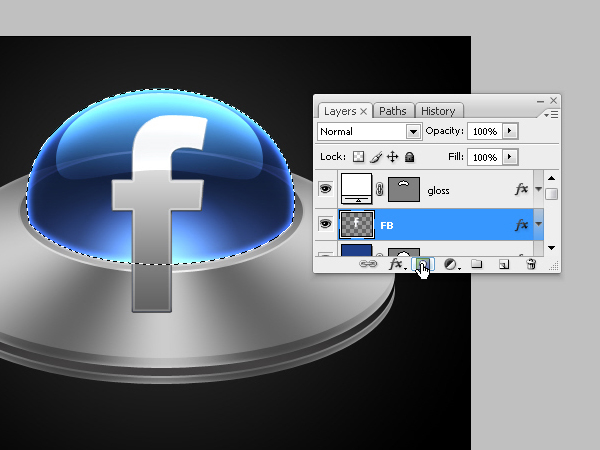 Hide all the effects inside the mask by clicking the “Layer Mask Hides Effects” in the layer styles dialog box.

Use different brushes to paint the perimeter lights depending on their distance. Try to make them as symmetrical as possible. 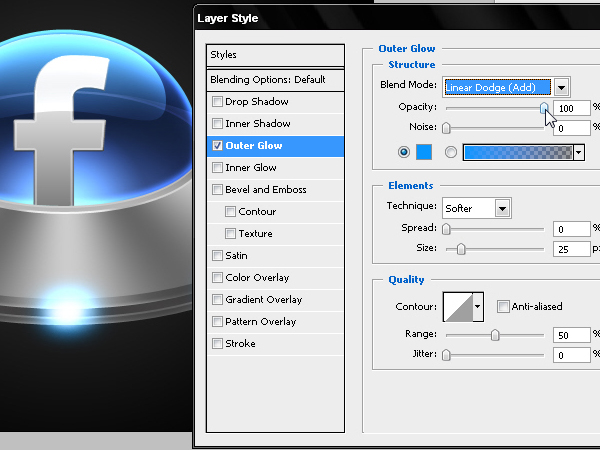 Group all the layers in a folder.

Duplicate the folder to keep a safe copy of your work. 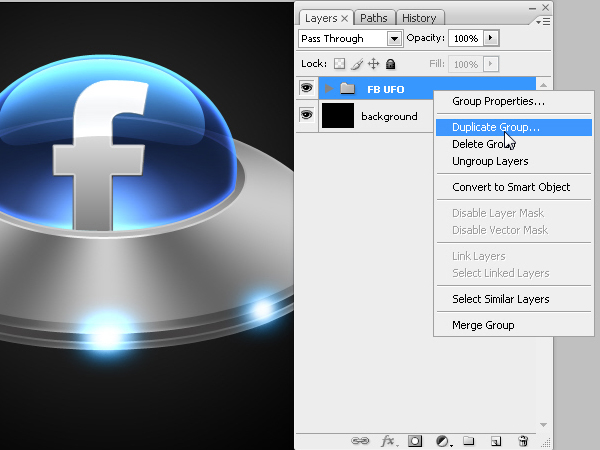 Convert the group into a Smart Object or select the option Merge Groups. The aim is to have the whole UFO on one layer so we can reduce the size without affecting the proportion of the layer styles.

Reduce the UFO to 65% of its original size and place it as shown below.

Now create the ray of light that the UFO will project onto the floor. To do this, draw a rectangular shape layer with the same width as the dome.

Edit the anchor points of the shape layer as shown below. 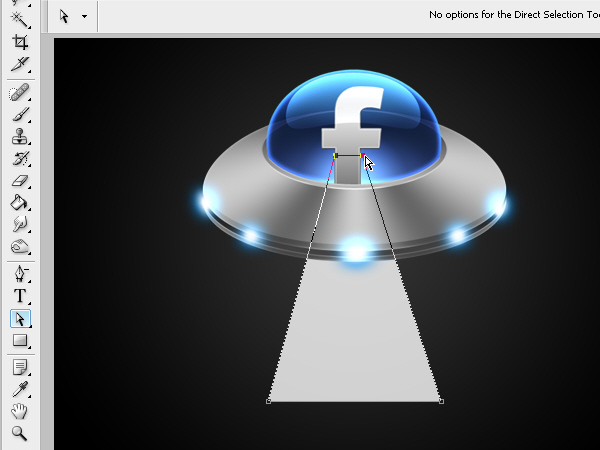 Add an anchor point to make a curve as shown below. 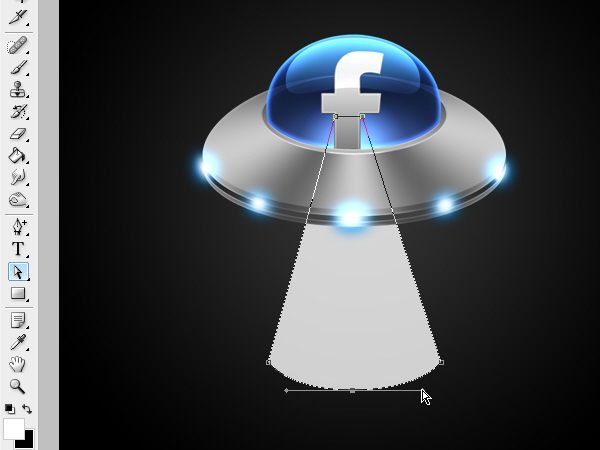 Convert the vector into a selection using the Paths Palette.

Soften the selection by going to Select > Modify > Feather. 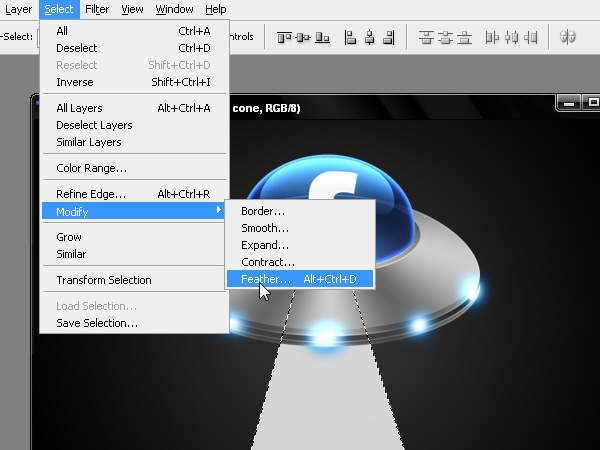 Set the Feathering to 3 px.

Paint inside the selection with more intensity near the source of light (the UFO). And with the same softened selection technique, paint the floor of the scene. 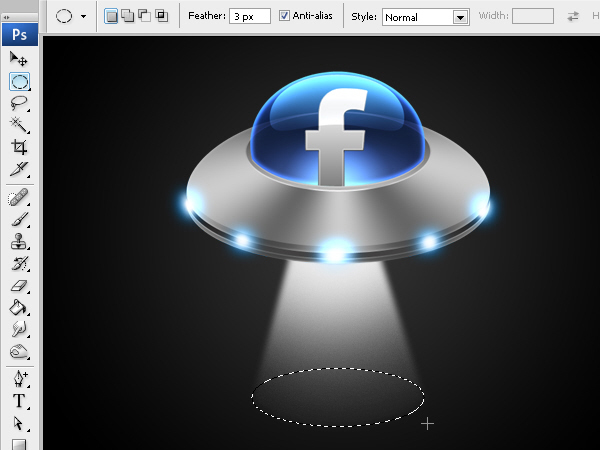 Now add light to the floor.

Add the following image to our artwork. Or find another one that you feel appropriate.

Cut it out from its background and reduce its size as shown below.

Create a shadow of the character by duplicating, inverting, blurring, and distorting it as shown below. 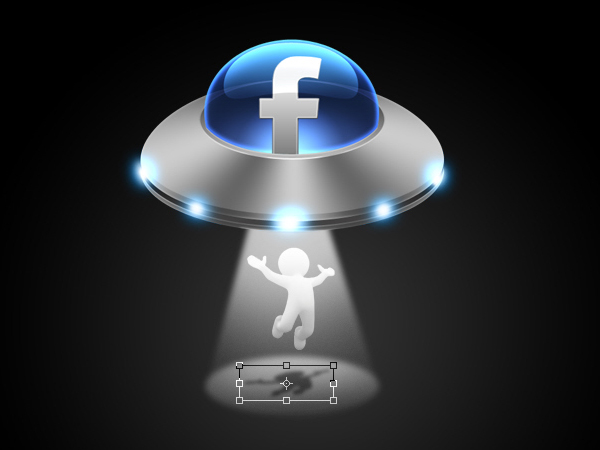 Download this font and include it in our composition. 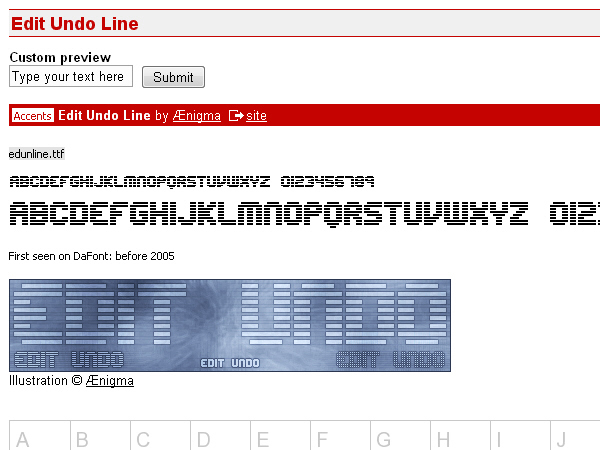 For some finishing touches, apply a drop shadow to our text with the color set to #0099FF and its blending mode set to screen. Then add an Outer Glow with its Blending Mode set to Linear Dodge. For the Background, paint a blue glow to give the icon more visual appeal. 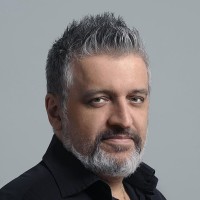 Alberto Kaiser Sosa
My name is Alberto ‘Kaiser’ Sosa. I'm a User Experience expert with more than 25 years in Advertising and Digital Art Direction. I've directed small and large creative and digital production teams and have mentored many colleagues. My work is a source of inspiration in Latin America.
Weekly email summary