Give Your Design Extra Style With Alternate Characters

What are Alternate Characters?

Alternate characters are special letter forms found in the Glyphs panel in both Adobe Illustrator and InDesign and can be used to replace the default letters in a font. They come in handy when you want to spice up your text with a flourish, a fancy embellishment or a snug fitting ligature.

There are several types of alternate characters. These include mathematical and scientific symbols, stylistic alternates, punctuation, and old-style figures, to name a few. In this article, I will discuss ligatures, swashes and logotypes.

Unfortunately, not all fonts come with alternate characters. They are most commonly found in OpenType fonts and are rarely found in free fonts. It's true. You get what you pay for.

In the example above, I mixed and matched alternate characters in the OpenType font Taiga to give the text a smoother flow. Notice how the alternate version of the capital "T" no longer interferes with the dot of the lower case "I". I also replaced the open lower case "A" with a closed lower case "A" and chose an alternate "G" with a longer tail. It looks a lot tidier in the revised version, doesn't it?

Where are the Alternate Characters?

When the Glyphs panel opens, you will be flooded with design possibilities! The panel contains the characters available for the font you are using and will vary with each font.

Should you want to check out the alternate character options with another font, simply choose another font in the field at the bottom of the panel.

How to Select and Apply an Alternate Character

In this example, I highlighted the letter "C" and was given four options. Click on the choices to see how they look with your text. To apply your choice, double click the character in the Glyphs panel and it will replace your highlighted character.

Here's another example showing all four options for the letter "L" in the word Lovely. I could experiment further and try options for the rest of the letters as well. There are numerous letter style combinations in something as simple as a six letter word.

When two or more letters connect, they form a ligature. The most common examples include fi and fl. Other combinations include ff, ffi, ffl, Th, oo, ck, of, and st, to name a few. Replacing these letter combinations with ligatures solves text crashing issues and creates a more aesthetically pleasing look.

Ligatures can be tricky to incorporate into a design. Therefore, it's important to maintain consistent tracking and kerning throughout a document in order for the ligatures to blend in with the rest of the text.

Note: If you plan on using tracking in a word containing a ligature, you will not be able to adjust the tracking of the letters in the ligature as the letter combination is a single character and cannot be altered.

Swash characters add flourishes and extended strokes to letters. Many times there are three or four options for each letter, which is quite nice... perhaps too nice! With so many choices, it's easy to go overboard.

Typically, the most flamboyant characters look best at the beginning or end of a word. In the example below, I chose fancy alternates for the "S" and "H". For the letters between them, I chose tamer alternates for a clean look and smooth flow.

Take it easy and pay close attention to the characters around the new alternate character. While a flowery letter might look great on its own, it could overpower a word or a headline.

Logotypes, or catchwords, are available as alternate characters with some fonts. Each logotype is one glyph. This example shows a few of the logotypes/catchwords that come with the font Bergamot. Outline these fun little characters and use them as artwork to increase their design possibilities.

Now that you've been introduced to the wonderful world of alternate characters, I encourage you to experiment. It's amazing how many looks one word can have when mixing alternate character styles. As is true with many things, moderation and common sense is key. 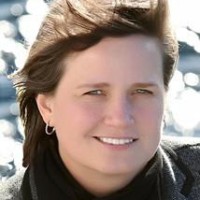 Julie Felton
I have been a graphic designer and illustrator since 1987. Over the past 27 years, I have worked on a wide variety of print and web projects for large corporations, small businesses, and individuals. When I'm not working, I enjoy gardening, catering to my dogs, and observing the silly antics of my chickens.
Weekly email summary