Garry Milne: Skating His Way to the Top

Like his creations, there are many layers to Garry Milne. While some of his images may have dark undertones, Milne is anything but. Here he talks about his inspirations, skateboarding and the importance of being nice to people.

Mark Twain once said, “Clothes make the man.” If such a statement is true then we’re in for a hell of a ride with UK-based Illustrator Garry Milne as he describes his usual outfit as being a skin tight zebra print jumpsuit. That was quickly followed by the obligatory, “I’m kidding,” of course but still…

So do I start with Garry Milne the person or Garry Milne the artist? Both are equally fascinating. Here are some quick facts about him: he enjoys a “super nice” White Russian, can flick his slipper into the air and catch it back on his foot, and chose the 1990s hip hop anthem “Jump” by Kriss Kross as the music to feature on his MySpace page, though on that same page he says his favorite kind of music is “anything with a pan-pipe solo long enough to make me question what I've done with my life.” If that alone doesn’t endear you to him then maybe I should mention the fact that his intricate, complicated illustrations have been featured in publications such as 4 Talent Magazine and The Skinny’s Student Guide.

Milne currently resides in a flat in Hertfordshire with his girlfriend Nadine who is pursuing a PhD in Psychology. It makes you wonder if she can read into Milne’s complicated illustrations and discern anything about the inner workings of his mind. He assures me that he never puts any secret images or inside jokes into his client work but “that’s not a bad idea, though…maybe [I] should!” He says he leaves the “strange stuff” for his personal work.

As a child he said he was loud and outgoing, and credits that to having an older brother to look after him. In addition to his older brother Stuart, his family consists of his parents who have always been extremely supportive of his artistic endeavors, allowing him to “make a mess of their living room for many years.” Stuart, who has featured some of his photography work alongside his brother’s in an exhibit titled “Milne vs. Milne”, was a different story in Milne’s early days. According to him, his older sibling taught him his first lesson in perseverance, in a way that only an older sibling can:

"I drew a picture of the Bushwackers- a WWF wrestling tag team back in the day. I was so pleased with it and I was showing everyone. It was sooo bad but everyone was being nice. I showed my brother and he couldn’t keep the laughter in – he cracked up. I got in a strop and tore it up. The next day I did another one which was better than the first. I think that taught me a valuable lesson about not settling on your first attempts."

Interesting enough, Milne passes that “big brother torch” to those starting out in design, “Don't give up. No matter how unlikely it seems - remember why you started art/design - because you love it and things will happen. Also be nice to people. It's a real cliché, but knowing the right people is a big part of the game.”

Right now Milne has a day job as a Graphic Designer at a local company where he does the typical promotional and corporate work. It’s at night and some weekends when he does his illustrating and creates pieces like Day Dreamer, Head or Heart and Piece Offering. I wouldn’t have been doing my job if I didn’t be a pain and ask him to explain that one, particularly because he describes it on his website as a “Personal comment on how I sometimes avoid explaining my work.” Milne played nice and answered the question for me, but I feel like I’d somehow be taking away some of the mystique if I revealed his answer.

To prepare for his career Milne went to school and then stayed on to 6th form before heading to college to do an art foundation degree. After that he went on to university to study graphic design and Illustration. While at university he chose to specialize in illustration, but also learned a lot about design. About that he says, “That has helped me develop my style and also helps when it comes to commissions – I’m not just providing illustrations.”

After university he started doing some freelance design work and then concentrated on illustration. As is common, it took a while for him to get work and be noticed. This is where his big brother’s earlier lesson in perseverance kicks in again. “Once I was given a few briefs – more seemed to follow. I think it’s just a case of proving you can deliver a job and being in mind when the right job comes up.” 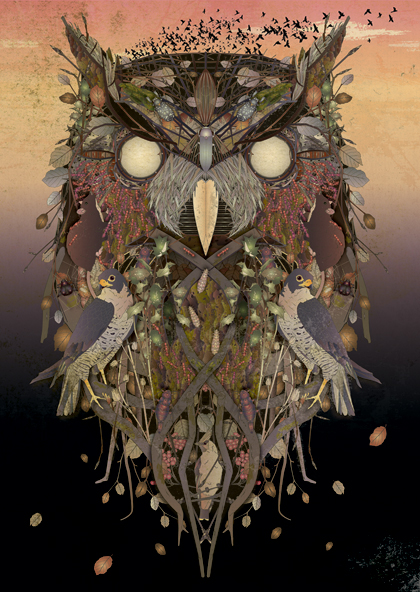 Patience is a Virtue

So far Milne’s been lucky enough to have fairly long deadlines when it comes to his work so it lets him take on more than one project at a time. While he handles those deadlines like the consummate professional that he is, he admits that they can be hard sometimes. "If you get really into a brief sometimes you’d just like to continue working on it, maybe change some things – take it further."

Luckily, though, Milne says he seems to get “fairly open briefs [and] usually the client tell me their loose idea or some aspects they want featured and I get to work.” He always starts with pencil drawings that are then scanned in and colored on the computer. Though he typically has a rough composition in mind when he starts, that often changes while he works using pencils, pens, paintbrushes, a scanner and a Mac. When in the need for some inspiration he turns to his large collection of art books as seeing the work of others makes him want to create something of his own.

Working on that Mac has sped things up when it comes to the amount of time he spends on each illustration and the longest he’s ever spend on a computer-generated one is two weeks. The longest he’s ever spent on one piece was a painting that took him two months. While painting is his favorite artistic activity, it’s something where he finds he lacks the patience he’s mastered with his illustrations. “I really enjoy painting. When you can see the effort that's gone into a painting it's hard not to appreciate it on some level. I'm a little impatient though - I want to see the end result now.”

One of Milne’s current projects is a series of skateboards for Motive which will be released soon. Skateboarding is another passion of Milne’s. He’s been very active in it since he was a child and even gave up playing football and basketball in school in order to pursue that more. There was a time when he thought about pursuing a professional career in it but that “didn’t really work out.” While participating in skateboarding may not have worked out career wise, it doesn’t mean that it hasn’t still played a big part in the career path he did choose. The Motive project won’t be his first foray into designing boards. He’s also done a series for Discipline, which he features on his website.

I really enjoy painting. When you can see the effort that's gone into a painting it's hard not to appreciate it on some level.

Other than skateboarding, Milne never really set out into the world with a clear idea of what he wanted to pursue. Maybe that’s why his favorite part of any project is the blank page. That page doesn’t stay blank for long, though at the moment his workload is heavy since he’s juggling a full-time job and his freelancing. Eventually, though, he’d like to be able to devote more time to his freelance illustrating, painting and exhibiting.

At 27, though, Milne has learned some hard lessons about the design world. “Don’t take things too literally. You can get promised a lot of things and sadly they rarely come through. That sounds a bit pessimistic but just don’t get too excited about things until they’re definitely happening.” It’s safe to say, though, that things are definitely happening with this brilliant illustrator. 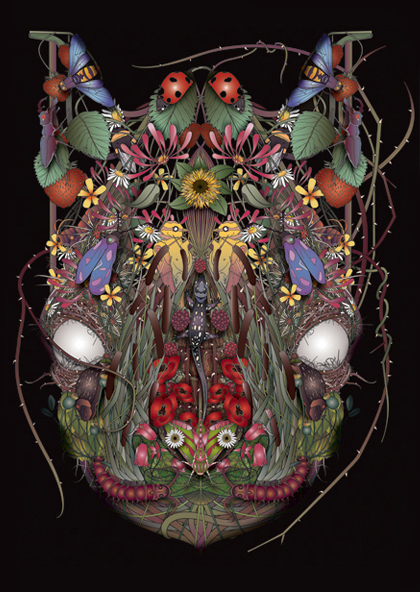 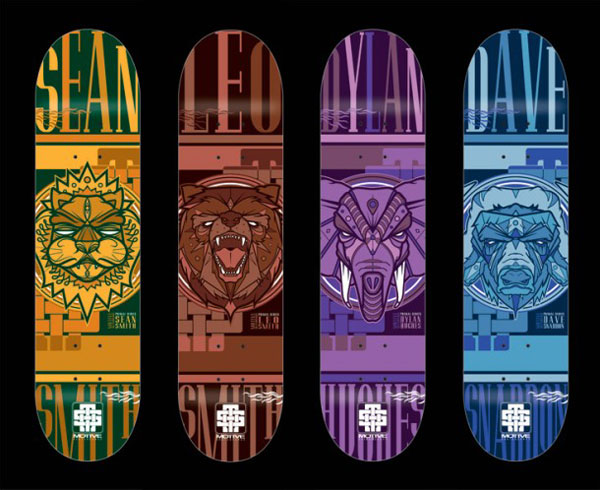 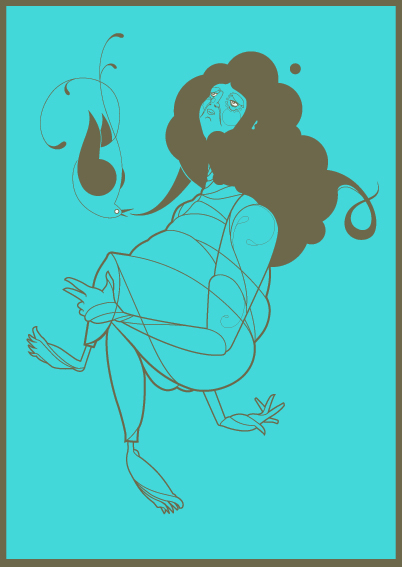 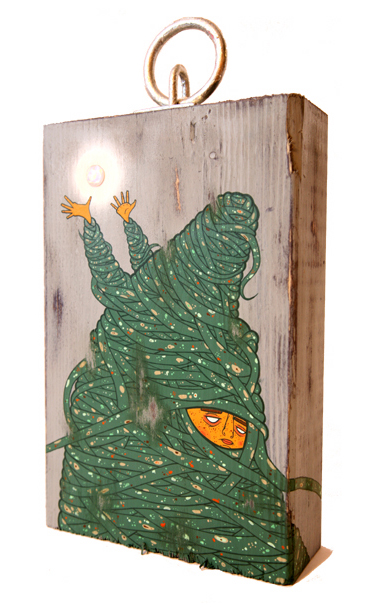 Check out Garry Milne on the web.