In the lead up to the 54th Grammy Awards on February 12, you may have seen some stunning artwork promoting the event displayed in your area. What you may not know however is that this artwork was created by a handful of Depthcore artists and past Psdtuts authors including Justin Maller, Jeff Huang, Niklas Lundberg, Emeric Trahand, and Pawel Nolbert. In this article, we will take a look at their artwork and will explain a bit about how the project came about.

Most of our readers would probably love to work on a project like this. Providing key artwork for an event as popular and prestigious as the Grammy Awards is a great honor. So before we start to talk about the artwork, you may be wondering how the project came about. In this case, both Justin Maller and Ars Thanea were tasked separately by TBWA to create a series of images for the 54th Grammy Awards. Maller had a tight deadline so he suggested that TBWA contact Huang, Lundberg, and Trahand to help produce the series in time. Nolbert worked for Ars Thanea.

In this piece that Nolbert worked on at Ars Thanea with the help of 3D designers Peter Kolus and Pawel Wilkos, Nolbert was tasked with creating the key visual for the main campaign for the event.

Initially, the client came up with the idea of building a scene out of floating sparkles, particles, and bokehs. In order to give the client some more options, Nolbert also worked on a concept using sound waveforms. Ultimately, the waveform idea was discarded in favor of the original idea.

This piece was created in Photoshop using 3D renders from 3Ds Max and Krakatoa. According to Nolbert, the most challenging aspect of this project was perfecting and revising the composition that was composed of nearly 1,000 layers. 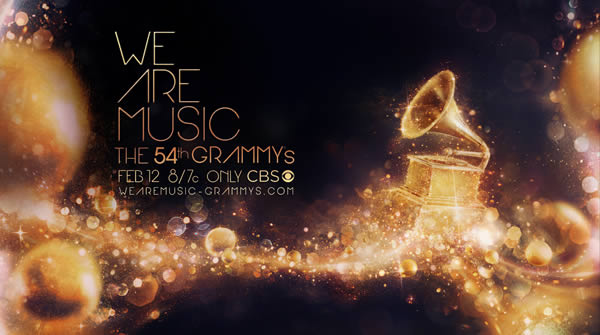 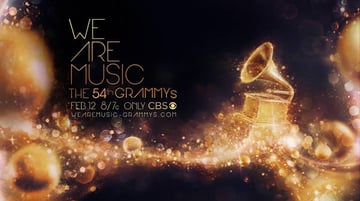 Key artwork for the 54th Grammy Awards by Pawel Nolbert at Ars Thanea. 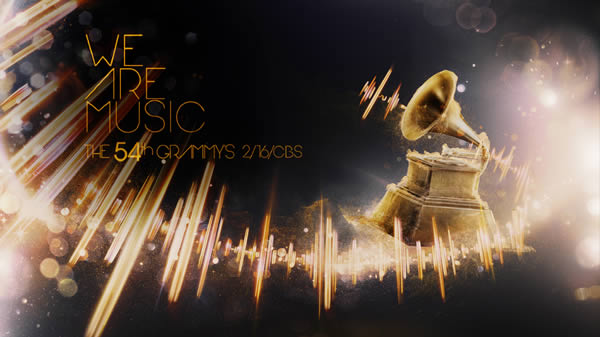 These compositions show versions of the artwork that were eventually discarded in favor of the original idea.

Maller worked on 2 pieces for this series. The first piece is a composition featuring Grammy winning artist Adele. Adele stole the show at the 54th Grammy Awards winning Album of the year, and then by breaking several post-Grammy sales records. The Adele piece features lots of bokeh and splash effects that fit in really nice with the rest of the campaign. 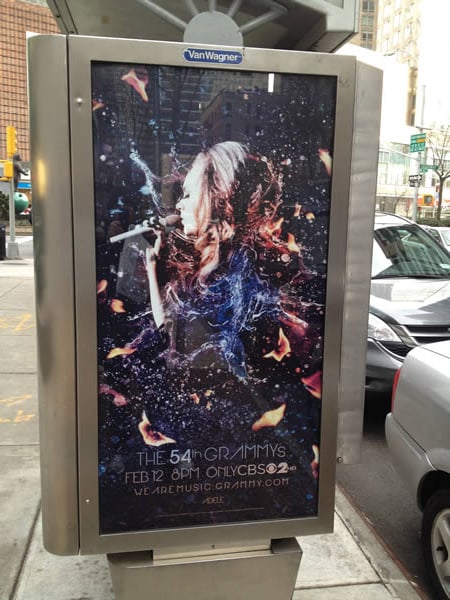 The Adele piece displayed on a pay phone in New York City.

The Bon Iver piece takes a different approach. It doesn't use cosmic or light effects much, at all. It is meant to be a reflection of his music, which is quite serene. 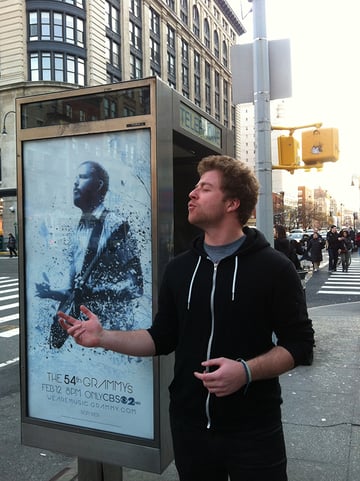 In this photo, Justin Maller poses in front of his Bon Iver design.

Like Maller, Huang worked on 2 pieces for this series. The first piece features Beetles legend, Paul McCartney who is considered by many to be the father of the rock/pop genre of music. This piece has an organic feel to it, the vines that grow from McCartney are meant to symbolize the growth of the genre that originated from his work. 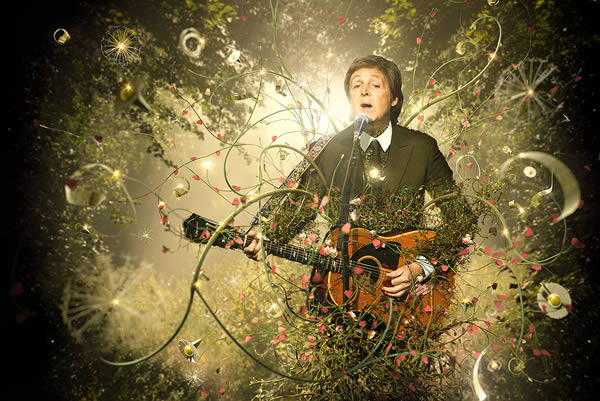 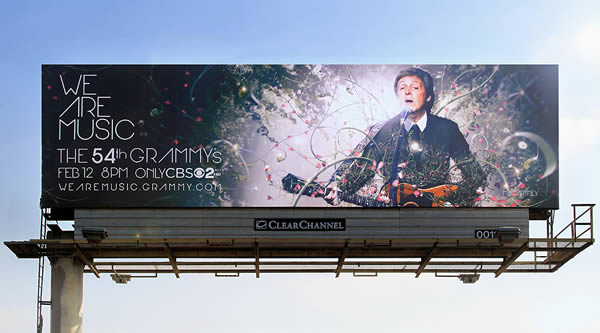 Here you can see the Paul McCartney piece displayed in large format on a billboard in Los Angeles, CA.

The Foo Fighters piece stands in contrast to the McCartney piece and is a bit more consistent with other pieces in this series. It features members of the band in different states of disintegration and includes lots of shattered glass and shards.

In this photo you can see the Foo Fighters piece printed on a billboard in Los Angeles, CA. It looks absolutely stunning at night.

This piece by Niklas Lundberg features musical artist Skrillex. It uses lots of cosmic and lighting effects to achieve the desired result. 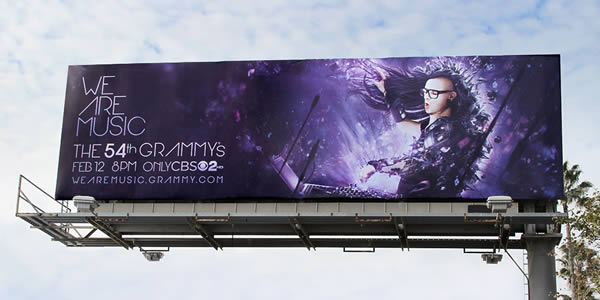 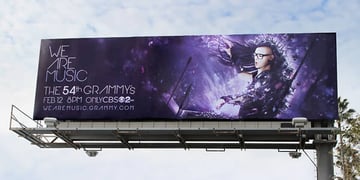 A daylight shot of the Skrillex piece printed on a billboard in Los Angeles, CA.

This piece from Emeric Trahand featuring Bruno Mars includes colorful liquid splash effects, as well as glossy hearts that are incorporated nicely into the scene.

A daylight shot of the Bruno Mars piece on a billboard in Los Angeles, CA.