Daniel LuVisi is a California native who has a tremendous passion for illustrating. His work has some of the most detailed and original imagery that you won't find in many places. Daniel takes inspiration from comics he read when he was a child, current music, and movies. In this interview, he stresses the important tasks designers should focus on to perfect their craft. Now, lets get into this interview!

Before we get started - a quick reminder, subscribe to the Psdtuts+ RSS Feed to keep informed about the best Photoshop tutorials, design articles, and inspirational digital art resources on the web.

1. Welcome to Psdtuts+! Please introduce yourself, give us a brief bio, tell us where you're from, and how you got started in the field?

My name is Dan LuVisi and I like to consider myself somewhat of a illustrator. I'm a California native, lived here all my life and plan to stay. I originally got started on art at the age of 3 or 4, I can't quite remember. My father and I were lying on the ground before he went to work and we had this old Ninja Turtles comic. There was this character who was a jean-shorts wearing crocodile and for some reason I just had to draw him.

So he challenged me to do it, told me he thought it'd be a bit too complicated and left for work. When he came home, my mom showed him the final version I did, colored. It wasn't exactly the same image, and I don't want to toot my own horn, but it was close. Ever since then I've been drawing every day that I can, a little too much at times, which can be a fault in itself. I got professional work right out of high school and have been pushing ever since. 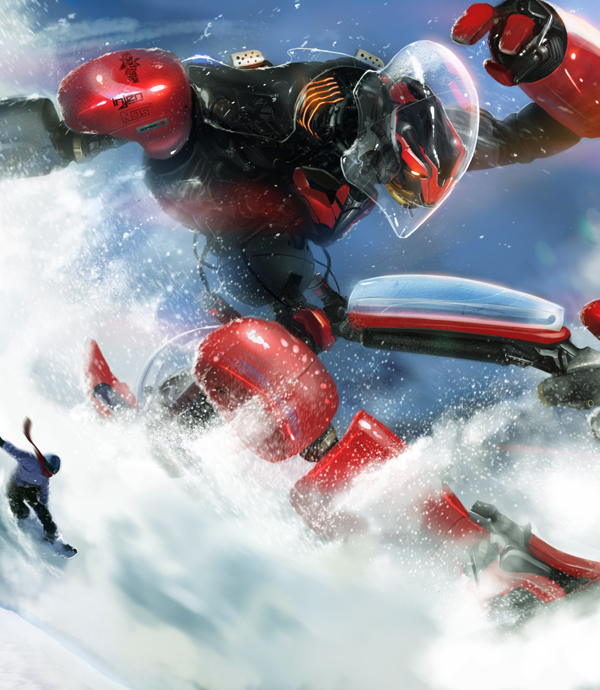 2. What made you first start doing digital paintings? If you can recall what did your first digital painting look like, and what is the most important thing you have learned since then?

My first digital painting was an illustration of Tom Hanks from Road to Perdition. I remember seeing this amazing Lord of the Rings image by Justin Sweet done in an issue of PC Gamer and was just so inspired by it that I begged my dad to get me one. He did for my birthday (I was like 15) and I just went to town on it. It was incredibly difficult the first time and (to me) looked awful. But for some reason, I just couldn't stop.

I kept on practicing and practicing. That's one thing everyone should do, I sound like a broken record but it's true. Use tutorials, read books, look at others art, and just push yourself to the limit. It can only do you better. 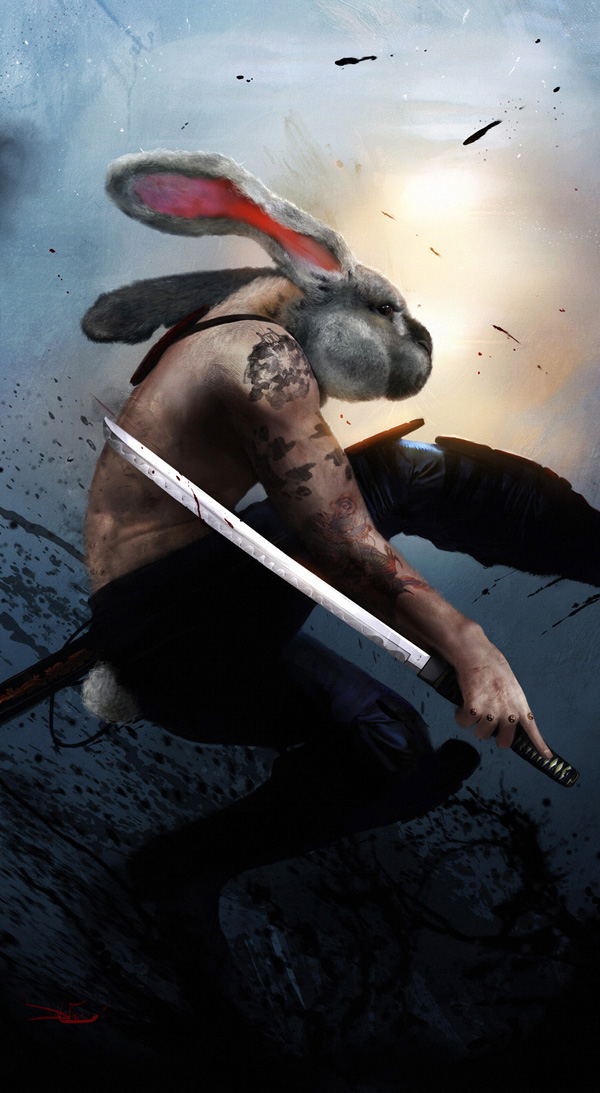 3. Give us a visual of your work area. What are your tools of the trade?

It all depends, I work in two areas. I have the office, which is down the block from where I live and I have the home area. In the office is the desk, surrounded by nerdy things I collect like Boba Fett statues, Wolverine toys, and Hellboy weapons. I have art around me, tons of Art books like Lord of the Rings, Star Wars, Pixar,

and art from Kung Fu Panda, which in my opinion is a must buy. I have all of that as well as art from different designers around the net.

I work on OSX, so I have an iMac and Macbook Pro and use a WACOM Cintiq 12UX, which I love. 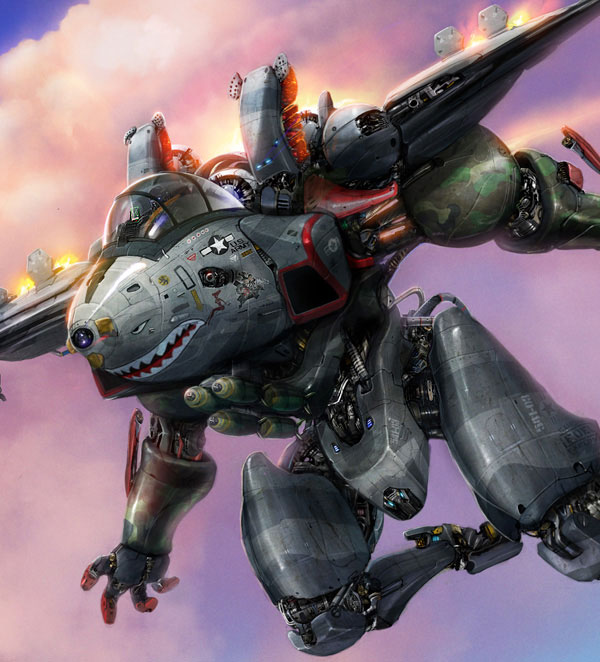 4. Please walk us through the typical process of making one of your amazing digital paintings. Do you start out by sketching them? Or do you start directly in Photoshop?

Well first of all, thank you for the compliment. I usually start by doing a low resolution sketch. Sometimes I do more than one, just to get the best composition and feel for the image. The idea comes from this weird right side of my brain, whether it's from movies or books. Music helps a lot too.

Then after that I'll make a layer underneath the line art and begin to color, rough strokes, this is usually my final step (for that day). If I enjoy it, which is hard for me since I'm way too critical over my pictures. I'll come the next day and start to blend the colors. I'm a detail freak so I'll move from one spot to the next. So it's all in patterns, going from one spot -- rendering it to the final extent then going to the next. Usually, it's a four day process. 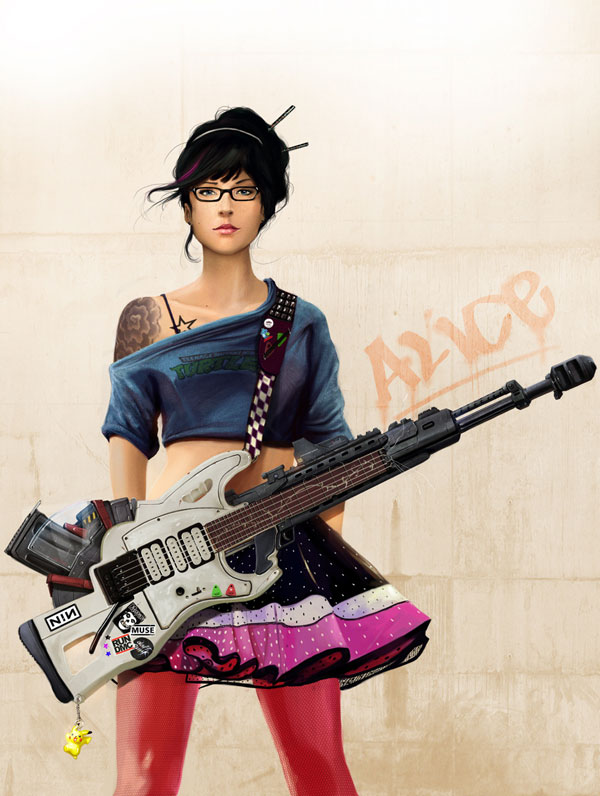 5. When looking at some of your art I am astounded by the amount of detail put into the paintings. How much do you really focus on detail and realism when painting?

I like to keep my pictures detailed, but not too detailed. I used to go way over board and I've learned by that mistake. Only put details in where it counts, where viewers will really focus. I mean, there's no point in detailing a mountain miles away, that's just a couple of strokes of color to portray that detail. It's a learning process, but I still try to keep them as eye candy, but stylized. Hopefully that makes some sense. 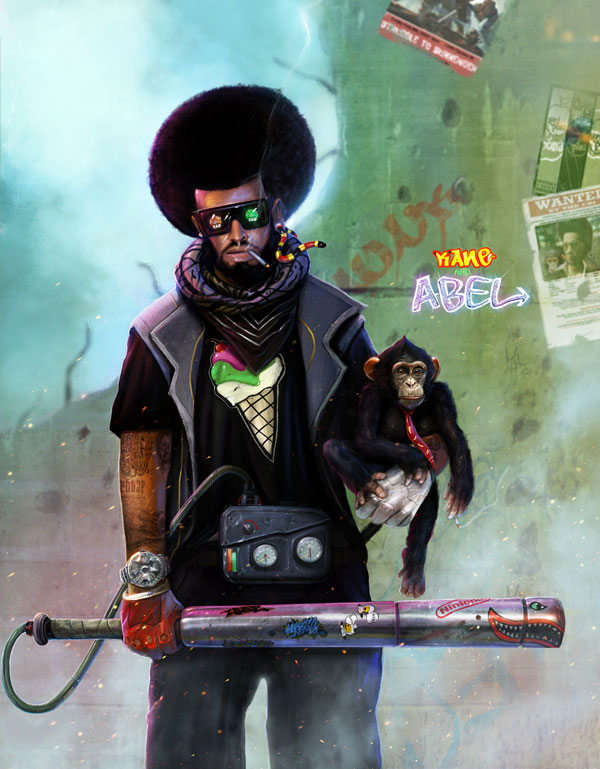 6. Looking specifically at some of your work like Samurai Bunny and Jawsome I cant help but wonder where you draw your inspiration and ideas from?

Well the bunny one I was just bored, ha-ha. I was just sketching, and thought it'd be funny to sketch a bunny man. Then turned it into a Tortoise and Hare picture, then changed it into a samurai bunny.

For Jawesome, that's an idea I've had in my head for the past year. I know

everyone thinks "Street Sharks", but no it definitely did not come from that.

I'm a huge lover of sharks, especially Great Whites. They're one of the most fascinating creatures next to the T-Rex. So I just thought it'd be completely badass (in my head) to make a Great White bounty hunter. Hopefully, I wasn't the

Where I get the ideas is just from my head, I can't explain it. I consider every idea being done before, so if it has, I try to at least give it some unique twist. Like the fish on the shoulder. 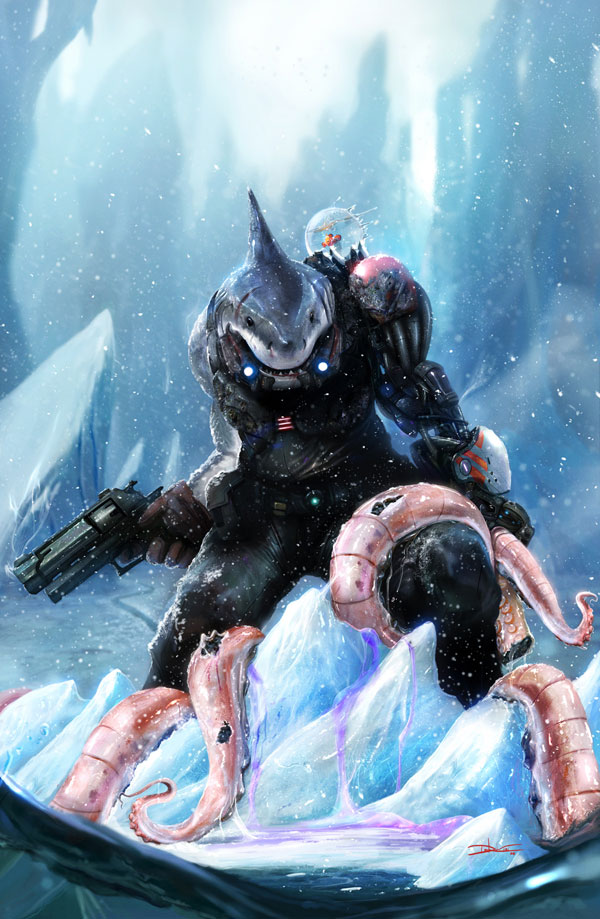 7. Are there any specific techniques you use when painting that you would suggest to someone who is starting out in the same field as you?

I think I listed them up there in the previous questions, but what else I could say is just bust your ass off. Don't give up and continue to press yourself to your limit (which should be until the day you're in your death bed).

To be blunt, don't put that damn pencil/pen down until you know you're finished.

8. Thanks again for providing Psdtuts+ with this opportunity to interview you. Any final thoughts? What would you tell other designers that hope to be as good as you one day?

I'm not that great at anything else, I suck at math, forgetful when it comes to history (bar World War II) and my writing skills are only developed when I'm inspired with an idea. So I knew that art would be the only way to make money, unless I wanted a 9-5 job. I kept that in my head and just continued and continued.

Your art is your own, WOW yourself, don't try to wow others. They'll come if you believe enough in yourself.

Everyone can be an artist, no one can stop you from doing what you truly love. That's why I love this field of work.

Thank you for the interview. Much appreciated.

Where to Find Daniel LuVisi on the Web