Creating Debut Album Art for If I Were A Mountain...

The Debut album of If I Were A Mountain... entitled "Dreams Are For Their Dreamers," is an introspective EP that takes a dive into the dream world and molds it into a melody that soothes and transports the listener. This article details the process I took when creating the album art.

Shown below is the cover art for the album. The cover was the catalyst for the rest of the design elements that were created. Read on to get a more in-depth understanding of the process involved. 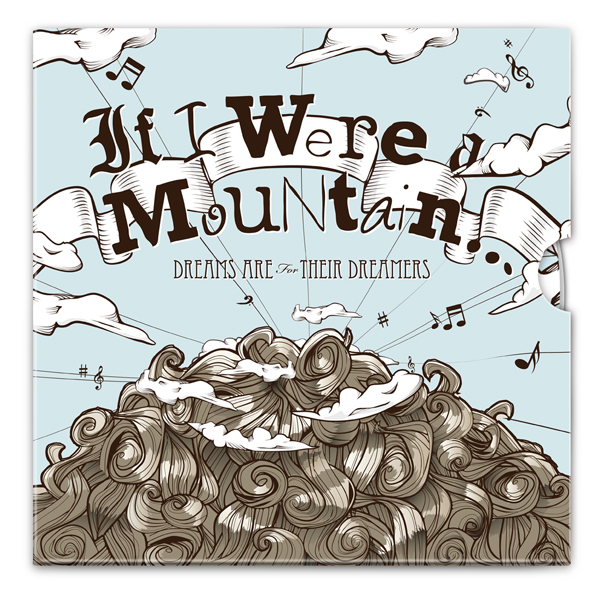 Before creating any visuals for this project, it was important to have the fullest understanding of the music that my client produced. I made sure to listen to the entire album to get the best understanding of what the client was all about. Check out the links below to hear for yourself!

With any project there is the opportunity to extract ques and information that can provide insight into the best creative execution for a project.

With any project there is the opportunity to extract ques and information that can provide insight into the best creative execution for a project. In addition to listening to each of the songs, I took a close look at the album name, song titles, lyrics and physical appearance of the band to determine more information that helped frame in the identity of the artist.

First, based on the album name I deduced that the overarching take-away that he wanted his listeners to feel was a sense of wonder.

Second, the song titles echoed the album name with titles such as “Sunny Day Driving,” “More to Accomplish,” and “Renaissance.” This further communicated the uplifting nature of the album.

Third came the lyrics. The client provided the lyrics to all the songs, which made it even easier to quickly reference what a song was about.

Last but not least was my client’s physical appearance. Artists of all types have physical characteristics that set them apart from everyone else. This was the case with my client too. I made sure note any unique qualities.

Evaluating all of these factors individually helped solidify the visual look the album needed to encompass.

Armed with all of the information I had learned and discovered, I took to brainstorming and sketching.

I knew from the beginning I wanted to create a unique representation of the album title. I wanted it to be somewhat literal without being trite.

One of If I Were A Mountain's... main visual characteristics is his curly brown hair. This is an extremely obvious feature and his fan-base has come to associate this look with him. With this in mind I found it very fitting to work that characteristic into the concept.

From there I knew I wanted to weave in his name into the execution. I decided that I would use his curly hair as the focal point of the art. The curls of his hair would double as the peak of a mountain!

With the framework of the design in place I took to drawing a quick sketch to solidify how this concept might play out on paper. 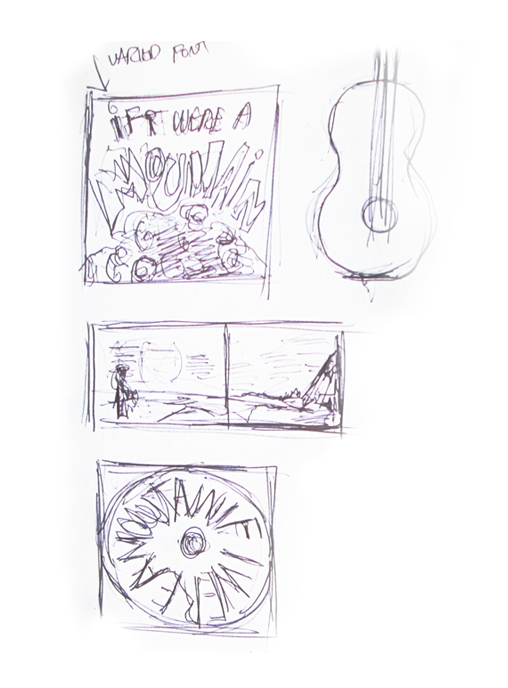 While sketching the initial concept I knew there were things that would be better left to further exploration when it came time to design the artwork at the computer level, which was the case with the artist and album name. I left these items very loose during the sketch phase.

Since creating an illustration is a much more complex and time consuming undertaking, I wanted to first verify with my client that this concept met his expectations. It's much easier to come up with another concept, versus spending time illustrating something only to discover that the client had something else in mind, then going back to square one. Clients many times change their minds, so it's better to be safe than sorry.

In this case, fortunately, the client did not have any changes after I described the concept. From there it was on to the fun part, creating the actual design!

I first started with illustrating the curly hair, as this would require the most time and attention. I illustrated about seven locks of hair... enough to provide some variance for the amount of hair that needed to be built up. Below are a couple examples. 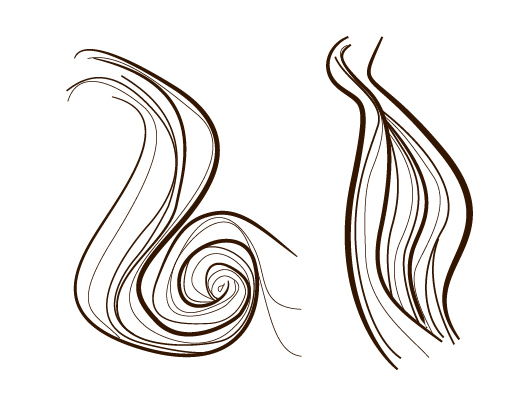 Next, I tediously layered each lock of hair on top of one another to build up a convincing pile of hair. I made sure to pay close attention to create something that looks like a head of hair AND a mountain. To accomplish this I made the head slightly less round and made it form somewhat of a peak, as a mountain does. It was important for the shape to first look like hair and second to suggest a mountain. 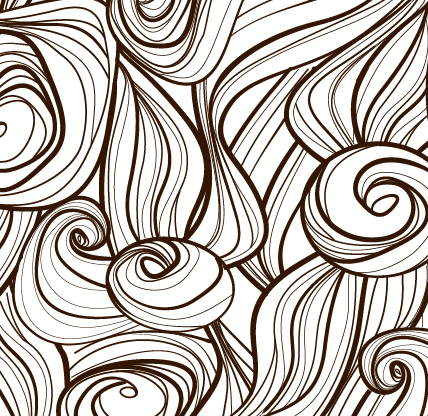 After the basic shape of the hair was in place, I decided to work on incorporating the text. I knew I wanted something eclectic and fun to match the whimsical nature of the illustration. To give the letters their hand-drawn charm, I did exactly that, drew them by hand.

As for the album name, I wanted that to complement the free flowing nature of the artists name so I used a more rigid and vertical font there.

Once these items were in place I knew I had successfully placed the correct hierarchy on the way the album cover was viewed. It's easy to start adding in other design elements before the more important elements are in place. For this reason I held off on adding clouds and other design enhancing elements so that I wouldn't have to work in the essential elements around the non-essential ones. 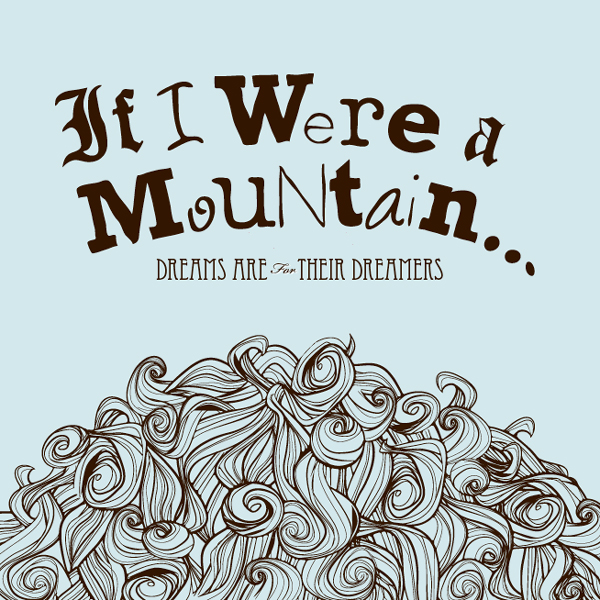 To finish off the cover I added color and depth to the hair, drew in clouds, the background ribbon and small design enhancing elements like the music notes. 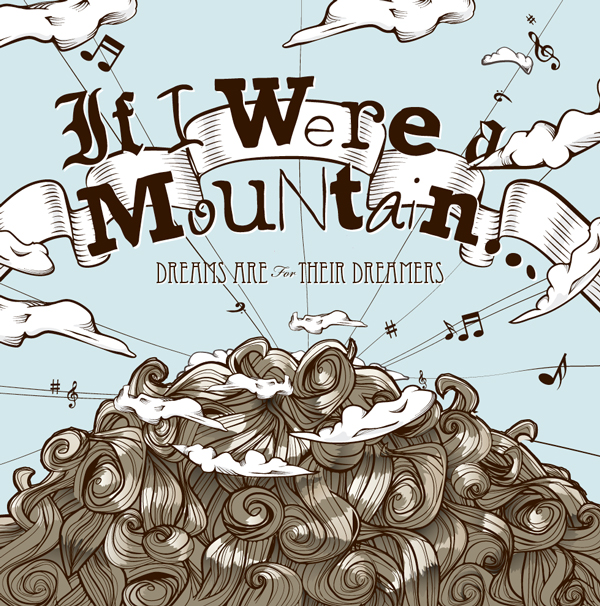 After all the elements were designed it was then time to show the client the finished design. I felt confident after all the background information I had done and was provided with, and due to the fact that I had verified the concept with him beforehand that there would likely not be many changes, if any.

And I was correct. The client had no changes to the design, so I finished making everything print ready.

The client was very pleased with the finished piece and is currently working on assembling a CD release party to celebrate this step in his career! Check out the full design below. 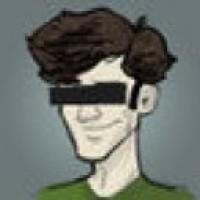