Designing a strong, coherent graphic brand identity is one of the most rewarding tasks in graphic design. It is a unique opportunity to create something that will go on to be used in many different places, applications and designs. In this multi-part tutorial series I'll take you through the processes and design I used to create the Rockable Press brand and its many different applications both offline and on. We'll begin by looking at the creation of the Rockable logo, look and feel and brand.

Branding is an area that encompasses a lot more than just graphic design. In fact it tends to bleed heavily into marketing and advertising. Hence brand development for large companies is often handled by an advertising agency or specialist branding and design house. Companies like Landor and FutureBrand will go far beyond graphic design and you will often hear them talk about brand experience and brand building.

As a designer my first instinct is to assume that brands are recognized primarily visually but in fact branding agencies often dip into the other senses as well. So for example sometime ago I met a guy who produces aromatic fragrances for brands so that everytime you walk into say, a particular clothing store there is the same subtle fragrance. Another non-visual method of branding is audiotory branding which is famously used by Intel with that familiar four note chime they always play on their ads as the "Intel Inside" logo appears.

If you're interested in learning about how branding works for companies a really, really good and quite easy read is the 22 Immutable Laws of Branding.

For our purposes, we're going to focus pretty much just on the visual experience of a brand.

About our Brand Example - Rockable Press

In this set of tutorials we're going to be looking at the development of an Envato brand called Rockable Press. It is a little division of our company that makes EBook guides to learning how to do things. So we have a book on how to freelance, a book on how to design WordPress themes, and we've got some minibooks in development on using Twitter for business use, on writing for the web, on slicing Photoshop designs, and so on.

If I were to identify the key brand value it would be that anyone can be awesome at what they do, and Rockable products are there to help people acquire new skills and get really good.

When it came time to create a name for the business however it turned out that Rockstar Press or Rockstar Books caused a lot of problems. A search of the US Trademark Database reveals that there are lots of Rockstar Something brands out there including one very famous gaming company.

So with a bit of lateral thinking we came up with Rockable which is a made-up word but which sounds real. In fact a search of the Urban Dictionary claims that the "word" means to have the ability to rock ... which is perfect!

A search of domain names showed that Rockable.com was gone, but RockablePress.com was available and so the name was chosen.

What Makes a Good Logo?

There are two main criteria I use to create logos:

For more on what makes a great logo, you should check out Tony Spaeth from IdentityWorks on the Six Universal Attributes of a Great Mark.

A first step in creating a logo is to decide is it going to be a Wordmark or a Symbol. A wordmark is when the logo is solely text based. A symbol based logo is usually an iconic graphic mark married with some simple text. Famous examples of wordmarks include Google, Microsoft, Elle, Sony and our very own Tuts+. While famous examples of Symbol based logos include Nike, BP, Blogger, Chevron and Envato!

How do you choose? Tony Spaeth again has a neat article called Symbol? Or Wordmark? which basically says that you should favour wordmarks for distinctive names and symbols for longer, generic names.

Personally I prefer symbol-based logos as they tend to be a bit more eye catching, especially if a brand is completely unknown. So for Rockable Press we're going to go with a symbol.

So the big question is, what symbol is going to represent this brand? To choose a symbol I usually think about:

In my case, for Rockable I decided the symbol should be something do with the word "Rockstar". I first thought just an asterisk * character would be good, since some people call that a "star". And when we were planning on making the brand Rockstar I thought it would be neat to write Rock* but as I detailed above that name got trashed and we went with Rockable instead.

I also spent some time thinking about what rockstars do. One visual idea that stood out for me was the idea of someone jumping with a guitar in their hand, or jumping into a crowd, or leaping across the stage. For me jumping seemed appropriate.

This idea will appear later in our book covers, but it also made it's way into the idea of turning the asterisk into a jumping figure like this: 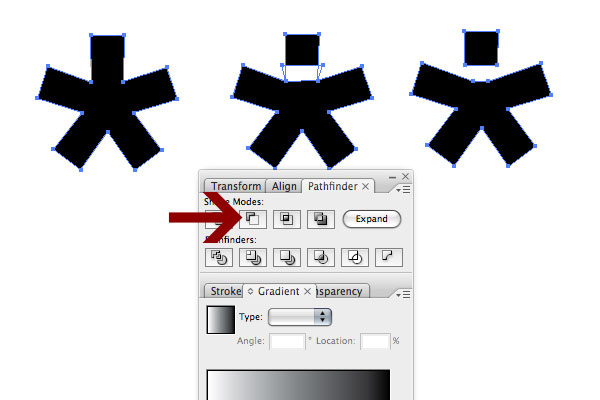 The next step is to choose a font to write my brand name next to the little asterisk man symbol. So how do you select a font? Here are a few considerations:

Now I have a very high-tech way of choosing fonts. Basically I write my word "Rockable" and then I scroll through my million and one fonts until I see something that looks good! Then I copy that to one side and do it some more. Finally I choose one out of the best candidates.

Using this revolutionary method I came up with a font that even sounds suitable - Rockwell Bold: 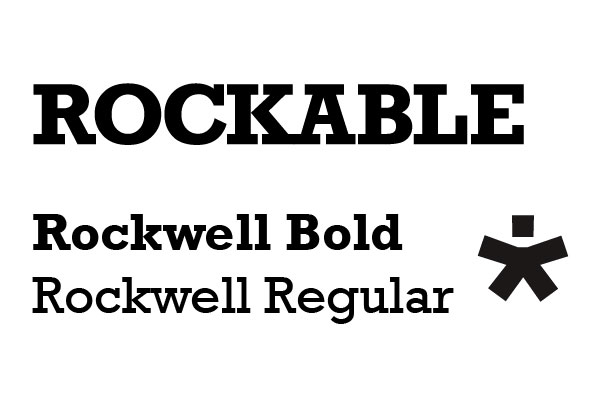 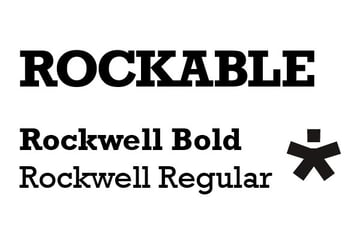 Rockwell is what is known as a Slab Serif typeface. Another great example of this type of typeface is Lubalin which we use for the Tuts+ branding. Slab serif typefaces are also sometimes called "Square serif" or "Egyptian".

They tend to be very bold, especially in the heavier weights such as I'm using for the logotype. Slab serifs feel kind of modern to me, especially when used in a minimal, big type, bold typographic way - like we will be doing with Rockable Press. According to the Desedo Blog Rockwell is also experiencing a bit of a resurgence in popularity which might explain why I think it seems modern. Anyhow here's an amusing video courtesy of Pulp Fiction, Samuel L Jackson and Rockwell (NSFW):

I selected a yellow which has some Magenta mixed in so that it's a bit warmer than straight yellow. For the grey I went with a mixed grey with a bit more Cyan in it, and then a second plain (and lighter) grey for writing on black with. And for the black I went with the plain black. 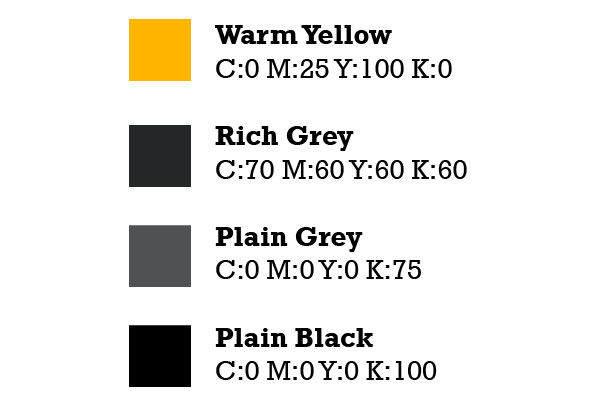 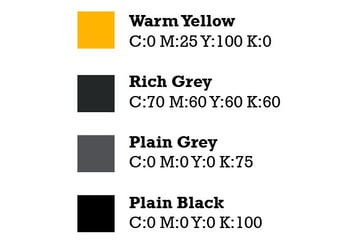 Your colour choice will probably be influenced by some of these factors:

If you're into colour, you should really join the awesome COLOURlovers site which is a community dedicated to just that!

At this point you might also want to decide on a specific Pantone colour that you wish to use. Pantone colours are a standard set of inks that almost all printers can offer for use in offset print jobs. The advantage to using Pantones is you can get a completely consistent colour representation in all your print work. To choose a Pantone you would get out your Pantone colour book and select a shade of yellow you liked. In my case I sold all my Pantone books when I stopped doing freelance design, so we're going to do this with just plain old CMYK!

Step 4 - Placement and the Final Logo

The last step in logo design is to place the symbol and text together. I should note at this point that choosing colours, typeface and creating the symbol usually happens as one organic process - it just makes more sense to explain it as steps!

So here I've placed the symbol and typeface together. I chose this sizing because:

At this point it's also important to decide how the logo is going to look when it's inversed on a dark colour. A good logo should look just as strong inversed as it does on white.

Some brands will need a more developed look for application to things like packaging and signage. In the case of Rockable Press, there is going to be a very important element in the form of book covers. So long before I took the time to create the first book, I sat down and designed the first cover: 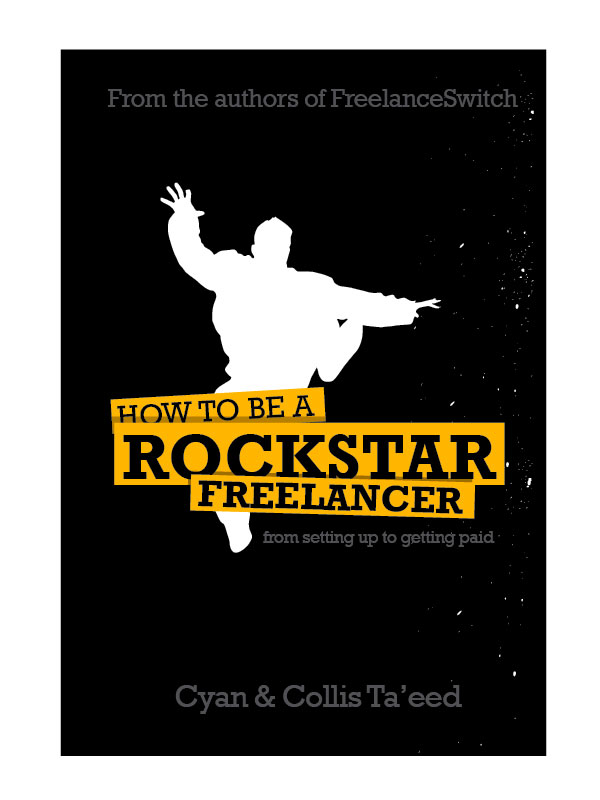 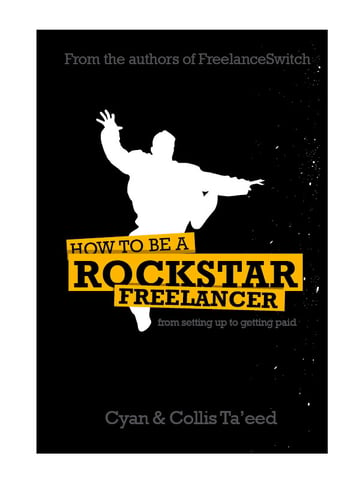 As you'll realise there isn't actually much to this cover, in fact the elements are:

And then I've just placed everything on the page!

One interesting aspect of design is that it very often does not involve much actual technique with Illustrator or Photoshop. That is to say there aren't really any special technical tricks that help with design. Most of the time it's really just about placing objects, figuring out the visual heirarchy and ensuring there's a nice balance of space and elements.

In the case of this cover there is no real technique to it. However there is a lot of placement. So for example the title is placed in such a way that it looks really bold and leaps off the page. The next most pronounced element is the silhouetted man which in white on black is as contrasted as it gets. The three supporting text elements are placed so that they are read as incidentals but also balance the page, so note that the top and bottom are both centered and the subheading is nestled in under the title.

You'll also notice that individual elements are unbalanced - the title elements are crooked, the silhouette is off to the left, the speckles are only on the right - but the overall effect is balanced. So the silhouette and the speckles balance each other out a bit, as does the subtitle which is right heavy. Similarly the crooked components of the title all form one cohesive block.

A styleguide is a document that tells another designer how to work with a brand. If you've ever worked on a project for a major brand you will have most likely been given a PDF or web styleguide that goes through things like:

Styleguides are important for keeping a consistent brand when multiple designers are working on the same project. 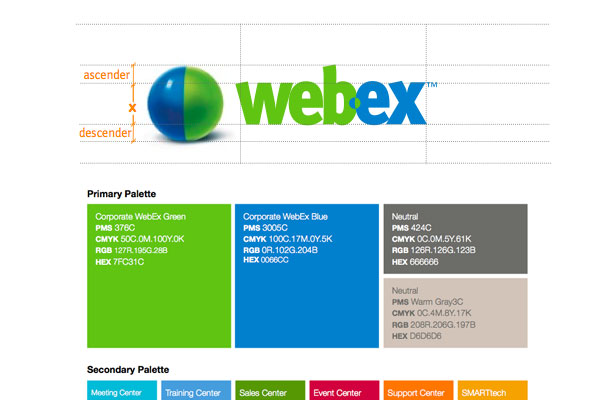 From the Webex styleguide

Of course realistically the Rockable brand is hardly going to be used by many designers the way Webex's brand would. However it's still worth creating a mini-styleguide. For example if this were a job for a client I would deliver my mini-styleguide at the end of the job in case they stopped using my services and recruited a different designer. They could then just hand the PDF over to the next guy to pick up where I left off.

What should we put in our mini-styleguide? Let's have:

You can do this however you like. All I did was create a new A4 Illustrator document and then saved five consecutive versions each with a different page of elements on it, then saved them each as PDFs and stitched them together in Acrobat using the Insert Page function. It took about ten minutes (and is a bit rough). Here's how my finished product looks:

The nice thing about a styleguide is it feels like something solid to deliver to a client. Particularly if you've designed a wordmark logo, sometimes it can feel like you're just delivering something really simple.