Creating a Collection of Quirky Caricatures

Last November we decided to round off the Tuts+ year with a bang; a huge giveaway (96 prizes, no less) to reward all the loyal Tuts+ readers. We felt it was a good opportunity to get visitors browsing the content on each and every one of the Tuts+ sites and it was high time the readers got to know who they were dealing with. We would release a series of caricatures; one of Skellie, one of Collis, one of each editor, plus some of the support and development team members. The job of producing these caricatures fell to me, and suddenly I was given the opportunity to create ridiculous drawings of all my Envato colleagues and make enemies of each one of them.

This Post is Day 9 of our Character Illustration Session. Creative Sessions

Let me just begin in a pretty unimaginative way by quoting Wikipedia. There it is stated that "a caricature can refer to a portrait that exaggerates or distorts the essence of a person or thing to create an easily identifiable visual likeness. Caricatures can be insulting or complimentary and can serve a political purpose or be drawn solely for entertainment." Insulting or complimentary, it was going to be one or the other, there was no half-way with this job.

Just a couple of months ago Tom Richmond saw his iPhone app Bobble Rep, featuring 540 political caricatures initially rejected by Apple. Their grounds for doing so? He was "ridiculing public figures." I knew the Envato crew were capable of laughing at themselves, but I was still going to have to be careful...

Caricatures done well are brilliant. Having an ability to draw, paint or illustrate is one thing, but those who have mastered capturing the essence of a person have skills which go way beyond. It takes observation, humor and communication, and it can be done effectively with surprisingly little mark-making. Take a look at this Freddie Mercury by Quel, eight marks on the canvas and he's achieved a perfect likeness. 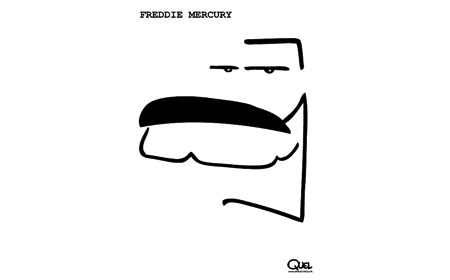 A lot of artists share this ability; placing a few crucial marks and shapes in the right composition and they've got it. A big favorite of mine is an artist whose work has been published in the UK's press for as long as I can remember (though try and find him on the internet and he's surprisingly shy!) Gary immortalizes celebrities in a flowing, minimal style, using just blocks of color and sweeping pen strokes. He manages it perfectly by highlighting unique features of each subject and placing each drawing in appropriate surroundings (Roger Federer here clearly playing lawn tennis). 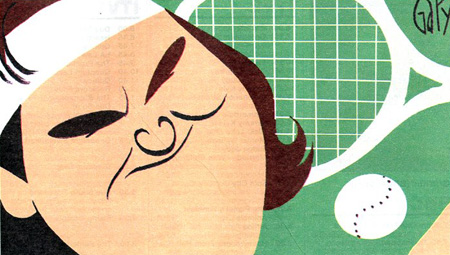 Then, of course, you have the other end of the scale where almost life-like portraits are created, exaggerated here and there, but always giving emphasis to the right details. That much was clear as far as my drawings were concerned; they could remain simple, but each one had to pick up on the right unique elements of the subject.

Choosing the style I would draw in was an important decision.

Rex Crowle's illustration work is fantastic. Allan Deas too. These were just two guys I was keeping an eye on last year, and I knew if I could recreate the kind of quirkiness their drawings have, then I'd have cracked it. It was time to dive in.

You can never do too much sketching. Typically, I never do enough, so for the purposes of this article please do as I say, not as I do. I'm a traditionalist too, and until I invest in a Wacom tablet (I'm not sure why I haven't yet), I'll stick to pencil and paper. Or pen and paper; there's nothing to match a sketch done in biro on a lined pad. I also like sketching with colored pencils. They don't give you as much control over line weight as lead pencils, but by changing colors you can emphasize and improve just the same. You can end up with some pretty cheerful images in this way and that can be as inspiring as anything when you're battling illustrator's block.

I started with Collis. Everyone knows what Collis looks like, so I figured if I could get him right, the rest would come naturally. Let's take a look at him shall we? 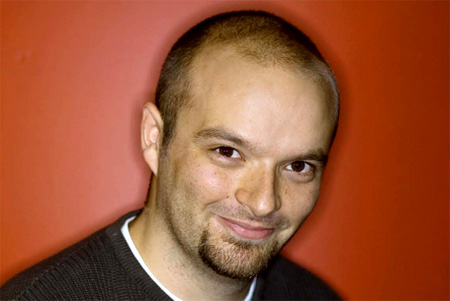 He has certain defining features, physical aspects which say something about not only his face, but his character too. His head is essentially round, that gives us a basis on which to work. He's quite a smily guy; a happy mouth is a good place to start there, but a person's eyes communicate smiling very effectively too. He has quite high cheek bones, strong(ish) eyebrows and very recognizable facial hair (failing to use the goatee would be pretty unforgivable).

Pulling these elements into a sketch eventually gave me the following result. 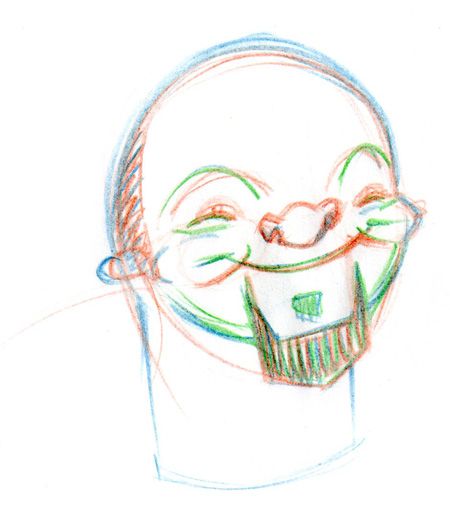 I tipped his head back, raising his chin and emphasizing his smile (it's making my cheeks ache looking at it). It was getting there, but having translated it into an Illustrator vector image I managed to completely suck all the life out of it. Sketches are often going to capture movement which you won't get with clean lines. The other team members were proving difficult too; I had in most cases just one image of each person to work from. This kind of drawing required significant studying and sketching if it was going to work. I knew I wasn't going to pull that off with 13 faces.

After more failed attempts (some pretty insulting ones actually) I opted to try drawing myself instead. I don't particularly mind insulting myself, so with that bridge crossed, I could relax and just get on with it. Big nose, lanky, usually fairly brown as I live in Valencia, and blonde (well, that's what we'll believe, OK?). Easy. Within seconds I had a sketch and when my four-year-old daughter pointed at it and said "that looks like you, Dad" I realized I'd hit the nail on the head; this would be the style. 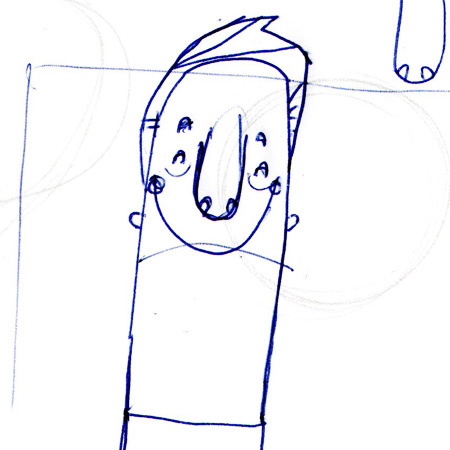 From that moment on I concentrated on the very basics of each person's physical appearance. These were going to be caricatures in the loosest sense, and I'd communicate any character traits through extra objects, scenery, activity and so on. I moved myself into Illustrator and turned the biro lines into vectors. A Spanish bull said enough about where I live and the colors kept things nice and happy. Blue sky, bright yellow hair, red mouth to play off the shirt and a teal green nose; all four sides of the color wheel in one shot. Perfect!

Initially, I gave the caricature a single, solid stroke all the way around. It gave a bit more clarity to the arms against the background (for example) and is something I often revert to in my drawings. This time though, I felt the lines were getting in the way. The simplistic, almost cut-out paper nature of the forms was much stronger.

I then took the finished image into Photoshop where I could add some texture, play with composition and finish tweaking the colors. I added a cactus which mirrored my body movement, plus some sand and a sun. The texture came from bittbox.com (thank you), which I positioned above everything, and gave an Overlay transparency. This drawing became the basis from which all the others would come. 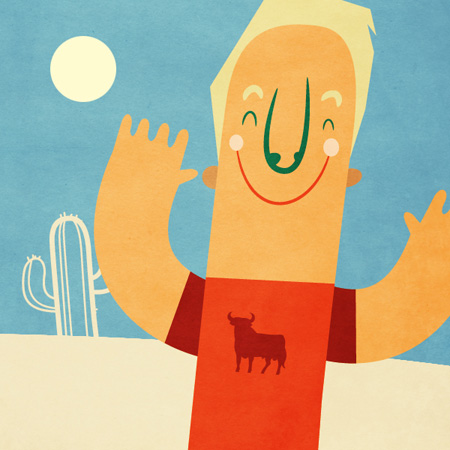 I work with vectors a lot. Getting to grips with how vectors behave can be a bit odd if you're not used to them, but the technical advantages are great. Your work is scalable; if Skellie ever wishes her image to be printed full size on the Sydney Opera House, she won't have to worry about quality loss. Editing is straight-forward; vectors can be moulded and changed with increasing ease as applications improve.

One huge advantage of working in Illustrator is the ability to re-use and modify elements; when illustrating 13 individuals this can be a real time saver. Eyes, mouths, hands, noses - I ended up with a library of body parts from which to build the images. I had become Doctor Frankenstein and the Envato team were my monsters.

I returned to Collis, took the same features I'd been looking at before (head shape, smile, goatee), then translated them into the revised style. I'd have him wearing a shirt with Australia on it, nurturing a plant upon which Envato leaves were growing. Finally, a Twitter-like bird would make one more reference to his professional activities.

Arguably, the head and thick neck weren't totally true to Collis' physical appearance, but I wasn't going for 100% accuracy any more.

Skellie was relatively simple, I was building up momentum now. Being the only female member of staff I was to draw, I just had to make sure she was clearly.. well.. a woman. This would immediately distinguish her from the others. From the photo I had, I could see that long, dark hair and a definite fringe were to be her tell-tale physical attributes. Aside from that, her love of soccer would give me some pretty clear visual references and she's familiar to most for having a Moomin avatar; that would be going on the shirt.

The process was clear now. The style was set in stone, the colors and tones were all playing nicely with each other, and the final images were working well as a collection.

To finish things off I made an accompanying group of thumbnails, each with a ribbon graphic to visually link them to the 12 for 2010 giveaway. Every member of the team had given the OK and I didn't seem to have upset anyone. In fact, several of the images are now in use as avatars, I couldn't have asked for a better seal of approval. 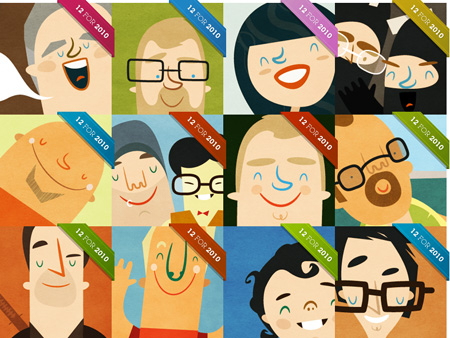 Case StudyVector
Did you find this post useful?
Yes No
Would you like to provide feedback (optional)?
Cancel Submit
Want a weekly email summary?
Subscribe below and we’ll send you a weekly email summary of all new Design & Illustration tutorials. Never miss out on learning about the next big thing.
Sign up

Ian Yates
Web Design editor at Envato Tuts+
My name's Ian; I'm the web design editor round these parts and I also run the translation project. Ask me anything you like about web design, in any language… I'll find someone who knows the answer! https://www.instagram.com/lycra_against_litter/
Scroll to top