In this tutorial you'll learn how to create a colorful rocket from simple geometric forms and 3D effects. We'll use filters like Blur to create smoothness and movement in some of the illustration elements. Effects like Inner Glow will also be used to accentuate the depth of the 3D forms.

Create an ellipse as shown in the example. 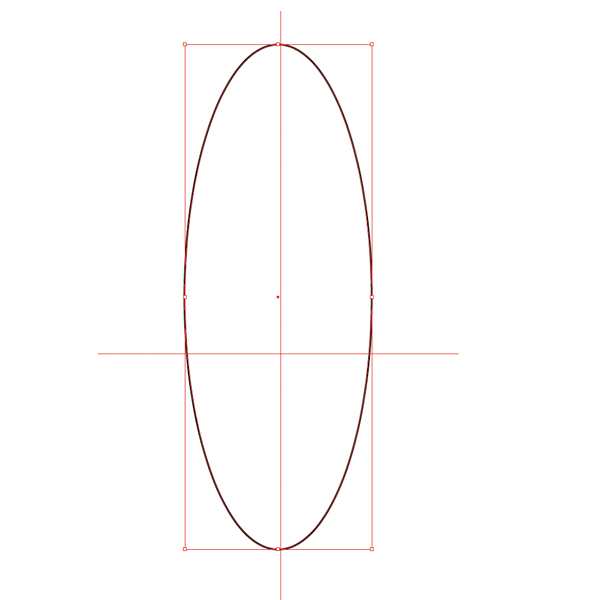 Verify if the guides are locked at View Guides (Shift + Command + ;). Select the guides and the ellipse, then in the Pathfinder panel activate the Divide effect. This effect will divide the ellipse into four parts. 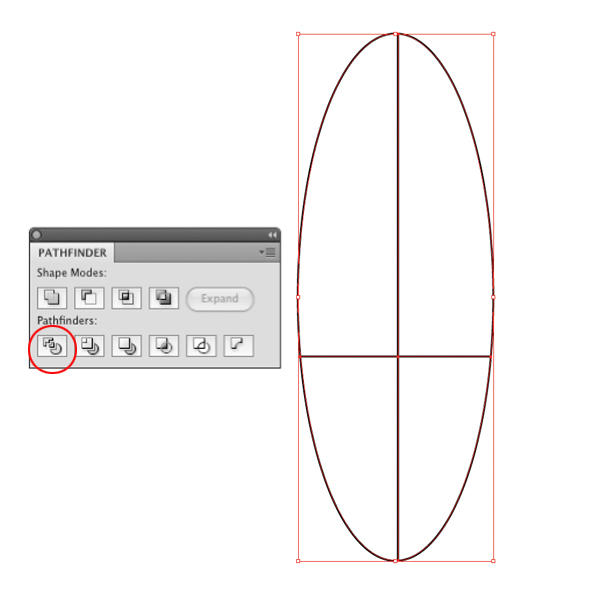 Delete three parts of the ellipse, leaving only the superior right part. Fill that part with a red color. That object will be the origin for the rocket body.

Use the same technique to create the objects that will be the origin of the rocket wings and the rocket tail. 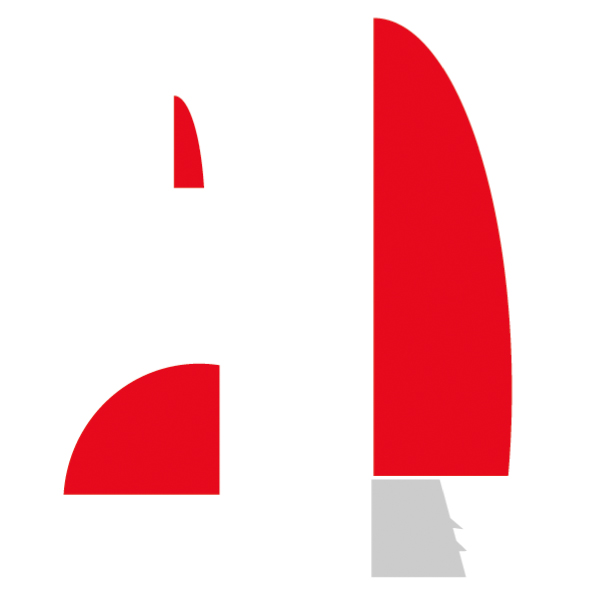 Now you will apply a 3D effect on the objects. Start with the main rocket body and the big gray tail area. The gray tail must be placed right below the main rocket body. It's important to verify that both objects are perfectly aligned at their left side, because the 360 degree axis that will be applied by the 3D effect is based on this alignment. 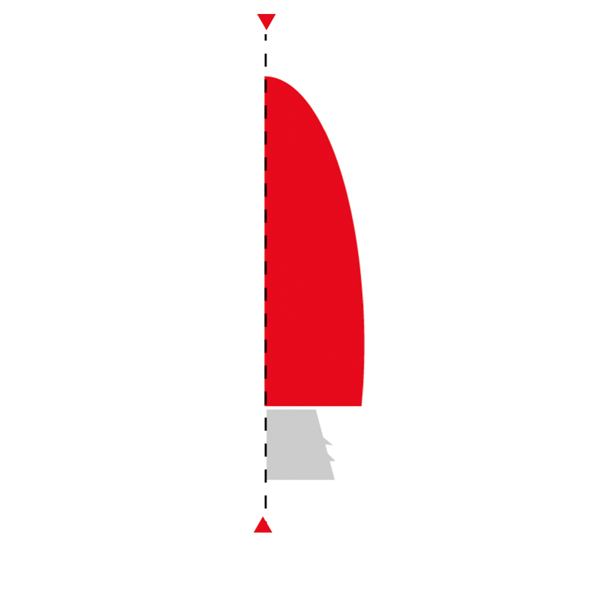 Group the two objects (Command + G) and go to Effect > 3D to apply the Revolve option. Rotate the object a little to the right by manipulating the cube image at the options window. When the perspective looks right for you, click OK.

We'll now use the effect settings that are now stored in Illustrator's memory. Select the smaller red object, which has the same form as the rocket's main body, and go to Effect > Apply Revolve (or press Shift + Command + E). This will apply to the small object the same effect with the same settings used previously on the main rocket body, also keeping the same rotation angle. 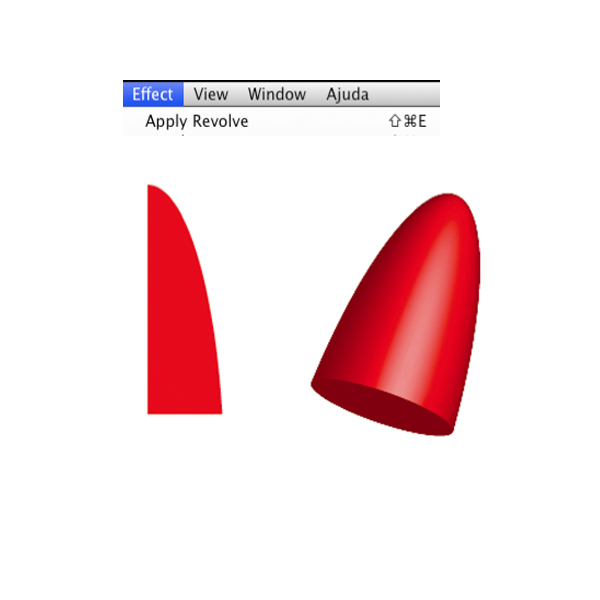 Now, select the wing object to apply the 3D effect. Apply an Extrude Depth of 5pt. Use the Bevel option to apply rounded corners on the object. Then, apply a Height value of 7pt and press OK. 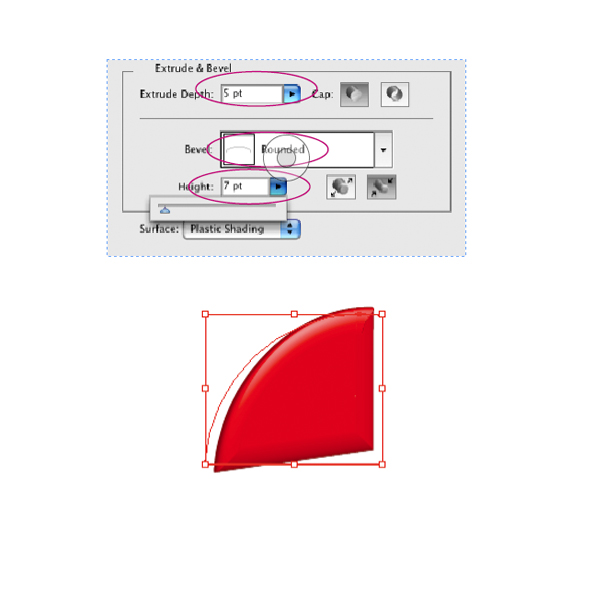 Leave the wing above the rocket. Go to the Appearance panel and click twice on 3D Extrude & Bevel to use the 3D configurations. Manipulate the cube at the options window to rotate the wing, setting it in a position that fits nicely with the main rocket perspective.

Make a copy of the wing and repeat the same process used previously to set its position.

Now you must also make a copy of the small red propeller. Leave each of these propellers at the wings extremities.

Now we'll create the elements for the rocket sticker. You can use geometric forms like the ones used on the example or you can create your own sticker. Remember that its possible to drag to the Symbols panel many elements like images, fonts, patterns, etc. Select the element you will use and, in case you want more than one element, drag one at a time to the Symbols panel.

Select the rocket body and access the effect settings through the Appearance panel. Click on Map Art in the options panel. In Surface, you can navigate through all the mapped parts of the effect. Keep the Preview box enabled and choose the rocket body area where you want to apply the sticker. In Symbols, you have access to stickers saved previously. Click on a Symbol sticker to apply it to the map. 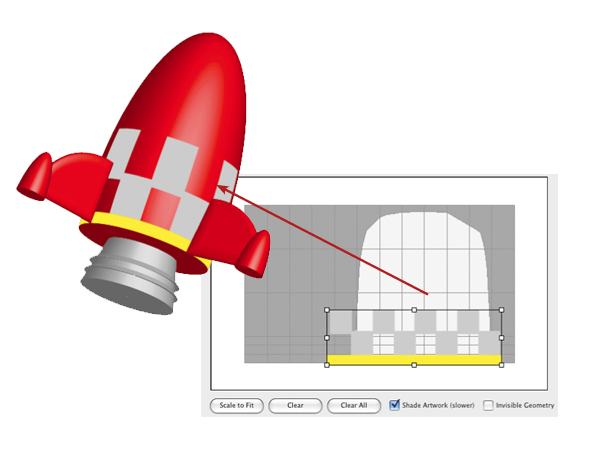 To apply the same lighting effect of the rocket to the sticker enable the Shade Artwork box, which is located below the map visualizer. 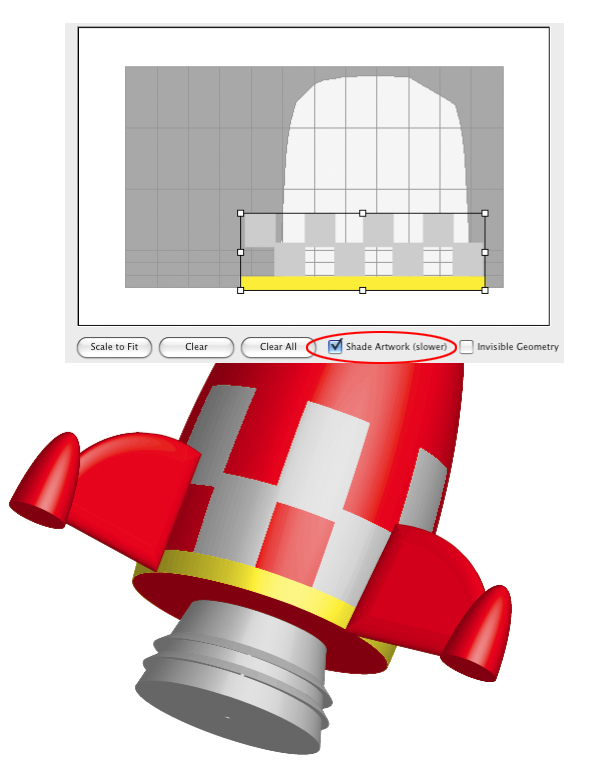 Apply some bolts to the gray rocket tail while still in Surface. 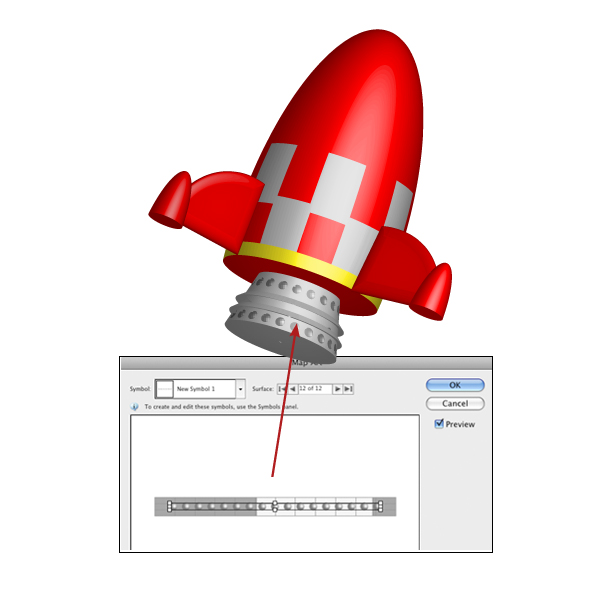 Let's create the rocket hatch. Use two juxtaposed circles. One must be bigger than the other. Center these objects, select them both and go to the Pathfinder panel to apply the Minus Front effect. To create a smaller ellipse make a hole in the bigger ellipse by creating a ring. Fill that new object with yellow.

Select the yellow ring and go to the 3D Extrude & Bevel Options. Change the settings in order to adjust the hatch perspective in relation to the rest of the rocket. Also make sure that the lights on the hatch match the lights on the main rocket surface.

Now we'll create the dark screen of the hatch. Make a circle filled with black. Then, make a bigger ellipse without a fill color over the black circle. Position this ellipse in order to create an intersection area between the two objects.

Select both objects, go to the Pathfinder panel and select the Divide effect. This next part will make the bigger ellipse. Create a division on the black circle surface. Select the superior part of the black circle and apply on it a black and white gradient. Make sure that the white part of the gradient starts at the center and the black part ends at the border. Now you must group both parts of the circle. 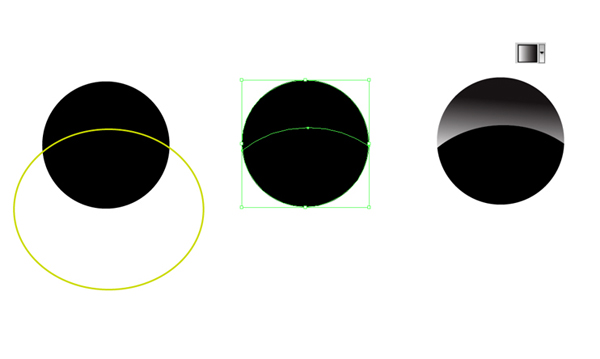 Go back to the 3D settings and use the Position resource to leave the black screen above the center of the hatch. 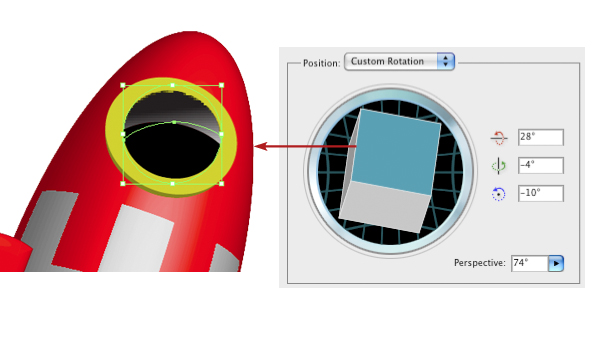 Apply on the object a gradient composed of white and opacity zero. This creates a subtle light that makes your illustration more interesting. Apply reduced copies of this gradient in other parts of the rocket, as shown in the example. 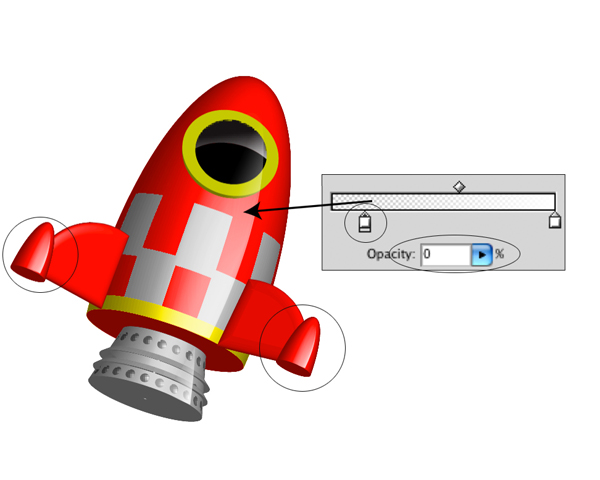 Reinforce the illusion of depth on the rocket by darkening the main body borders. Go to Effects > Stylize > Inner Glow to create a smooth halo around the selected object. For the color options, choose black and for the Mode choose Multiply. Enable the preview mode and choose an Opacity that fits your style. Repeat the process on other parts of the rocket.

To create a flame that exits the rocket, you can use a flame shaped symbol already present in Illustrator. To access it go to the submenu in the Symbols panel, enable the Open Symbol Library option and activate the Nature library. Click on the flame symbol and drag it onto the main document. 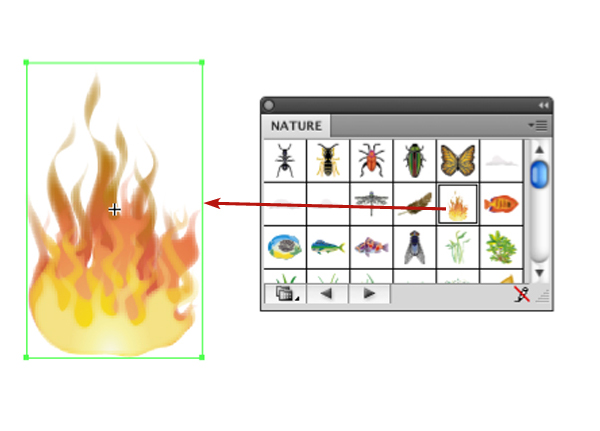 Give the flame symbol a Vertical Flip. Go to the main menu and click on Break Link to transform the symbol into a form. 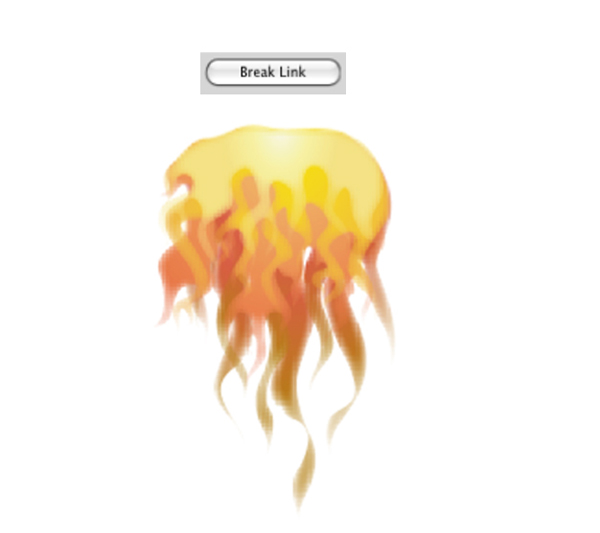 Create the effect of extreme movement on the flames by using Effect > Blur > Radial Blur. Position the Blur Center at the top of the preview. Choose an Amount value of 70. 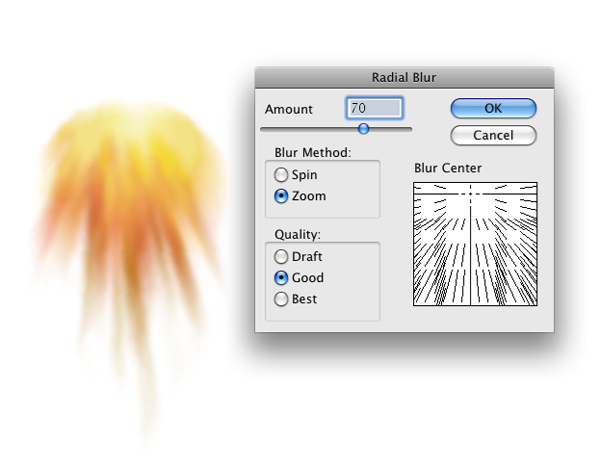 Maintain the object selected and at the main menu in Object activate the Expand Appearance option. Now rotate and position the flame at the exit of the big gray propeller.

Now we'll create the universe! Start by creating a layer below the finished rocket layer, then make a rectangle filled with black. 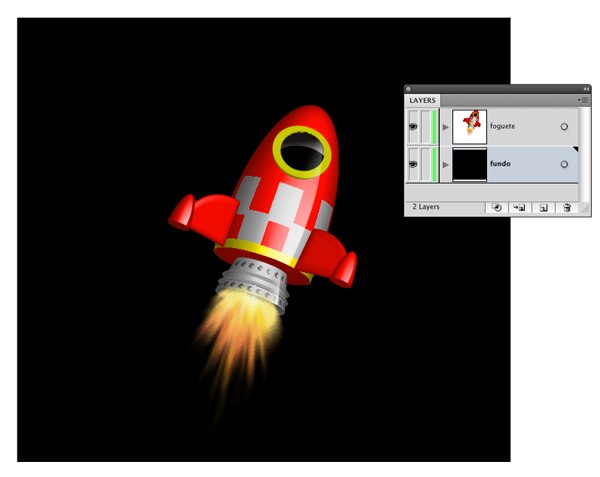 Access the Star tool in the Tools panel and make a small star filled with white over the black rectangle.

Drag the star inside the Brushes panel and create a new brush with the Scatter Brush option.

Use the Brush Tool loaded with the new Star Brush to create a line of small stars over the black background.

Maintain the brush stroke selected and click twice on the Brush icon to activate the options panel. Now change all the panel attributes by using the Random option. Exaggerate the Scatter attribute in order to make the stars well scattered. 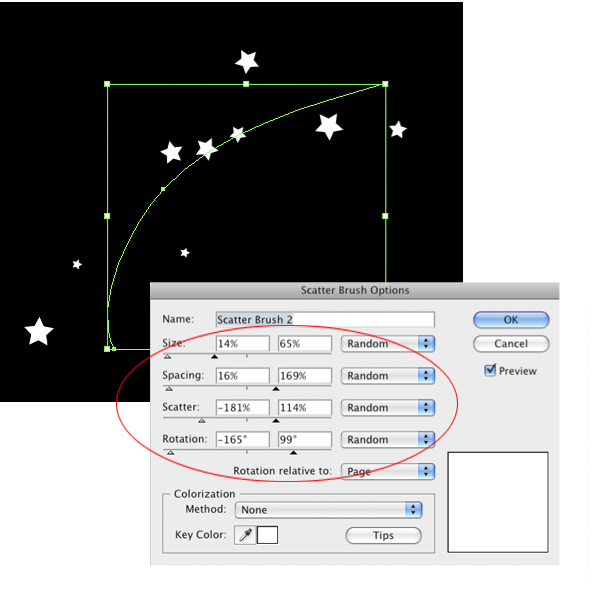 Once the brush is configured, paint the stars over all the black background. 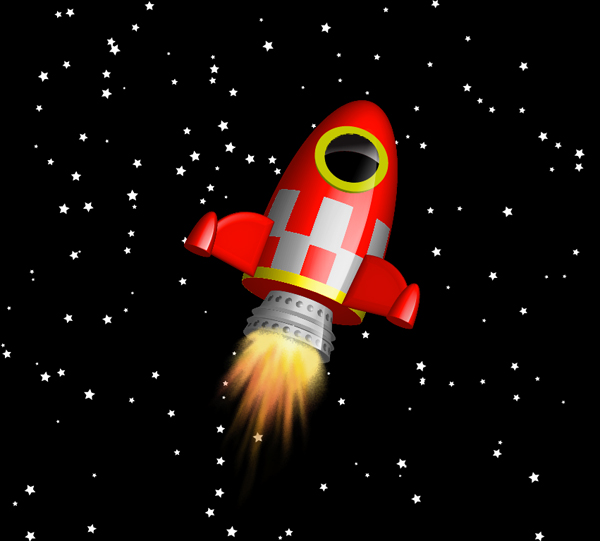 Open a new layer between the rocket and the background and make an irregular shape filled with magenta.

Finally, apply a blur to the magenta object with Effect > Blur > Gaussian Blur. This will increase the emphasis on the rocket illustration. The final image is below. 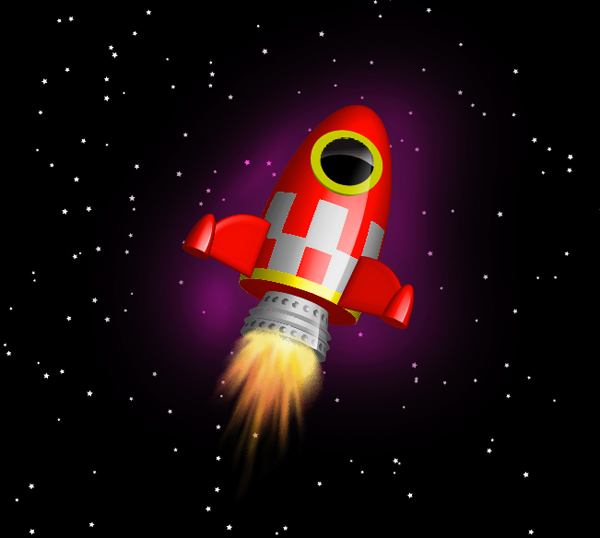 Getulino Pacheco
Getulino is a brazilian illustrator and designer. He uses all his know-how to use computer as an artistic medium and is considered a pioneer at brazilian digital art. He is a curriculum developer at Desktop (www.dtp.com.br) teaching Illustrator, Photoshop and Painter. Getulino also is involved with teaching seminars with softwares specialists such as: Alexandre Keese, Emanuel Infante, Sérgio Aguirre, Carlos Bonilla, Jack Davis, among others.
Weekly email summary