To understand what is possible with the Appearance Palette, have a look at the image below. A simple path can be turned into fairly complex vector artwork simply by applying multiple fills and effects. With this in mind, let’s get started.

Create an artboard of 500px by 500px. Make sure you have the Appearance Palette open as we’ll be using it right away. Pick a heavy typeface of your choice and type your words at about 70pt. When you’re happy with the hierarchy, outline the letters by clicking Type > Create Outlines and then Ungroup them if necessary so each letter is independent from the rest. Remove the fill and strokes that are assigned to the letters by default. The appearance palette should show they have nothing applied to them yet.

(Note: For clarity, my images show the letters unselected, but in order to continue adding effects, you need to keep them selected throughout the tutorial.)

Next, select the empty "stroke" attribute in the Appearance Palette. Apply a 1pt stroke of a similar color to those in your gradient fill, (C=4.5 M=80 Y=90 K=0). With the "stroke" attribute still selected, open the Transparency Palette, set it to Multiply and 50% Opacity.

We want this stroke to be offset a bit from the edges of the letters so go to Effect > Path > Offset Path. In the options box that opens, select an offset of approximately -3 px. This dictates the stroke will be 3px away from all edges of the letters. Click OK and the new effect will be applied and be visible in the Appearance Palette. The offset can be adjusted at any time by double clicking on the Offset Path descriptor in the Appearance Palette.

In the appearance palette, click on the drop-down menu on the side and select "Add New Stroke." With this new stroke selected in the palette, follow the same process as Step 3, only make the stroke yellow (C=5 M=30 Y=65 K=0), 0.5pt, and Offset the path by -2.25 px.

The next step is to add a bit of dimension to the letter-forms so we’ll want to add a slight 3D edge and a shadow. This will be done by adding two additional fills of color to the letters and adding effects to each fill respectively.

First, click on the drop-down menu and select "Add New Fill." You will need to drag this fill layer to the bottom of the appearance palette so that it appears Below everything else we’ve already applied to the letters. Make the fill a bright red (C=5.5 M=100 Y=100 K=35) and then go to Effect > Distort and Transform > Transform. Under "Move," set the Vertical positioning as -2.5 px, which will cause this red fill layer to appear 2.5 px lower than the fills and strokes above it.

Create another fill layer, drag it below all of the others and apply a dark green color (C=100 M=50 Y=65 K=50). Set this fill to Multiply and give it an Opacity of 30%. Again, Move the vertical positioning down by 2.5 px like before, but this time also offset the path. Go to Effect > Path > Offset Path and set the offset to 1.5 px. You’ve just created the base of the neon letters!

Select these paths and remove any fills and strokes they already have applied. In the appearance palette, start building up their glowing effect.

First, apply a 1.75pt stroke. Give it a dark orange color (C=5 M=90 Y=100 K=0) and set the stroke to Multiply. Using the same technique as before, move this stroke down by 2.5 px by going to Effect > Distort and Transform > Transform and adjusting the Vertical positioning to -2.5 px. This will serve as a slight shadow for the neon forms.

We’re going to keep applying new strokes to build up the glowing effect. In the end, we’ll have 6 strokes applied to a single path.

Note: Since all of the remaining steps incorporate an extremely similar process, only the necessary explanation will be given from now on. Please refer back to these first few steps for clarification if necessary.

Now that we’ve built the letters, we’ll use the same techniques to build the rest of the lights on the sign. Draw a rounded rectangle slightly wider than the letters. Following the process we have so far, we’ll remove the default stroke and fill and build up the layers in the Appearance Palette.

First, apply a black fill. Set it to Multiply and the Opacity to 35%. We want this fill to act as a shadow so we’re going to stagger it a bit from the strokes we’ll be placing on top. Go to Effect > Distort and Transform > Transform and set the Vertical positioning to -4.5 px. This time, we’re also going to adjust the vertical scale to 200%.

Copy and paste the rounded rectangle six times and place them at equal distances beneath the letters.

To build the base of the sign, draw an ellipse, and then two rectangles overlapping it at the top and bottom. Open the Pathfinder Palette and while holding down the Option key (Alt on PC), select Subtract from shape area.

With this new path, we’re going to follow the same process by assigning multiple strokes and fills to one shape, but first we need to make a pattern that we’ll used as one of the fill layers.

Create a 25 x 25 px square and give it a 1 px stroke of a light tan color. Next, fill the square with nine rows and columns of small circles. You can use the Align Palette to space the circles evenly if necessary. Finally, using the direct selection tool, (A) delete the bottom-right anchor-point of the square. Select the entire group and drag it into the Swatches Palette, forming a repeating pattern. We’ll be applying it to our sign shortly.

Make another fill and open the Swatches Palette. Choose the repeating pattern swatch we created in the previous step. In the Transparency Palette, set the Opacity to 25% and the blending mode to Multiply. And finally, add a 3pt stroke to the path. Set the color to tan, (C=10 M=15 Y=40 K=40) and offset the path by -6.5 px.

Place this shape in behind the letters and the main structure of our sign is complete!

We have the main Appearance styles for the sign complete but will want to apply these same appearances to other paths in order to complete the sign. To speed up the process, open the Graphic Styles Palette. Select the back of the sign and create a graphic style from it by clicking the "New Graphic Style" icon on the bottom of the palette. Do the same thing with all of the other sign elements as well.

Make a rectangle approximately 340 px wide by 100 px tall. Go to Effect > Warp > Arch and set the bend to 25%. Click okay and then expand the warp by clicking Object > Expand Appearance. Place this rectangle on top of the other sign elements.

Remove any default fill and strokes that might already be assigned to the shape. Click on the appropriate style in the Graphic Styles Palette, assigning all of the fills and strokes we’ve created for the sign.

Following the same technique, create a square, assign the same graphic style, and place this square at the bottom of the sign. The main structure of the sign has been created and all that’s left is to add the finishing touches!

Finish the sign by creating the remaining details. Since we’ve already created all of the Graphic Styles, we only need to create empty paths to apply these styles to. Pick a scripty typeface and type out a secondary message for your sign. Create Outlines from the text by clicking Type > Create Outlines and clearing the fills and strokes that they default to. Assign the graphic style created from the blue tube lighting and position this type in the arched rectangle.

Continue this process for any finishing elements. If you need additional graphic styles, follow the same process as before but switch the colors of the strokes and fills.

All that’s left to do is place a dark background behind the sign and you have an easily editable neon sign. And the best part is there are only several paths in the whole thing! No complicated bezier curves or stacking multiple vector shapes on top of one another was needed. The Appearance Palette does all the hard work for you. Take a look at the images below to see how simple the paths are compared to how impressive the final product looks.

To really accentuate the neon sign effect, bring the vector artwork into Photoshop and apply some glows and atmospheric imagery. Experiment to create some really intriguing artwork! I hope the tutorial was beneficial and you learned the power the Appearance and Graphic Styles palettes can have. 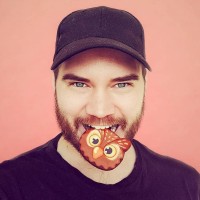 Jared MacPherson
Jared MacPherson is a graphic designer and illustrator living in Edmonton, Alberta. He currently works for Plumbheavy Design as an Intermediate Designer and enjoys digitally painting in his free time. He can be found online at JaredMacPherson.com
Weekly email summary