While Photoshop is a very powerful raster-based image editor, it also comes stocked with many powerful vector-based editing tools. In today’s tutorial, we will demonstrate how to create a detailed vintage television icon using Photoshop’s vector editing capabilities. This tutorial is an excellent example of how Photoshop’s vector tools can be combined with layer styles to produce an illustration that is not only editable but scalable as well. 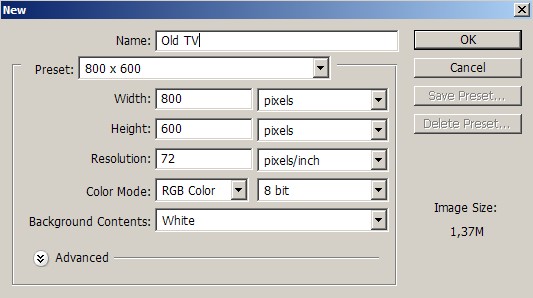 Use the rounded rectangle tool with radius of 10 px to create a dark brown rectangle. Give it a Layer Style and an Inner Glow.

Still using the rounded rectangle tool, draw a small rectangle inside the previous rectangle. Use a gray color. 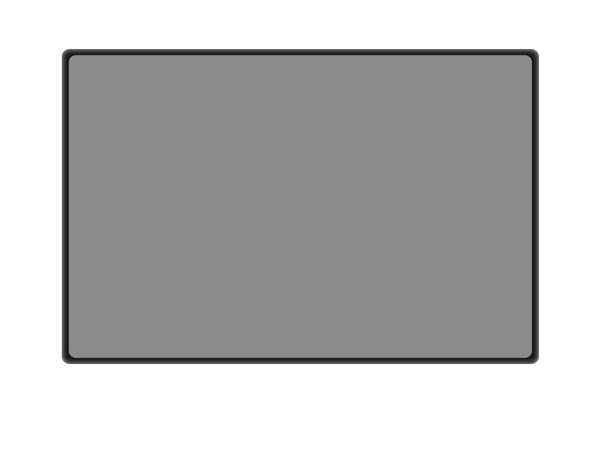 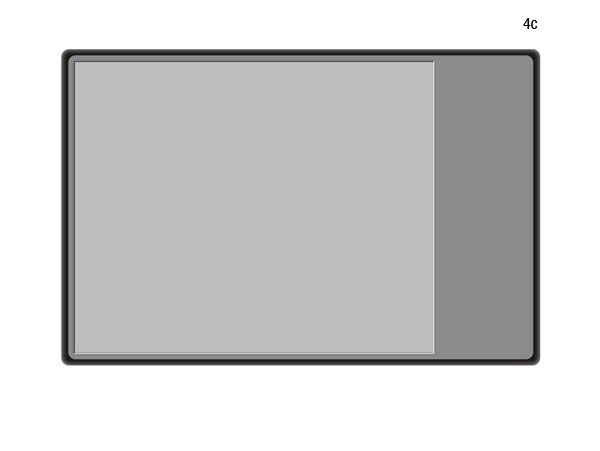 Now we'll add a subtle texture. Alt+click New Layer icon. In the next dialog box select Use Previous, Mode: Multiply, and Fill with.

Select Filter > Noise > Add Noise (6a) and Filter > Blur > Motion Blur (6b). Lower the layer's opacity to 50%. This will add a subtle texture to the surface.

Now, we will start work on the screen. Using the rounded rectangle tool with Radius of 30 px draw a rectangle. 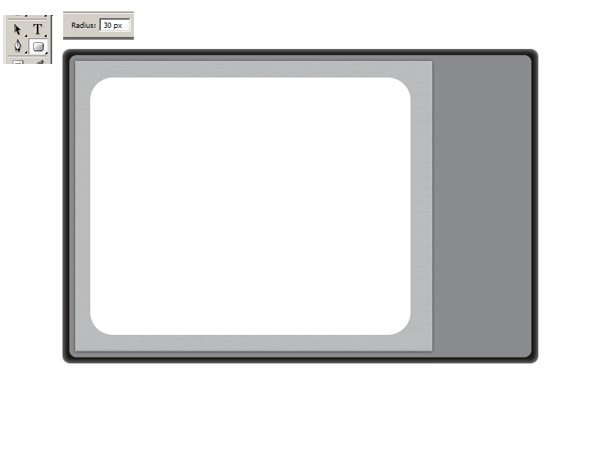 Select screen path with selection tool (the black arrow). Activate pen tool and click top half of the rectangle. See the picture below. This will add a new point to the path (8a).

Do the same to the other side of the rectangle (8b). 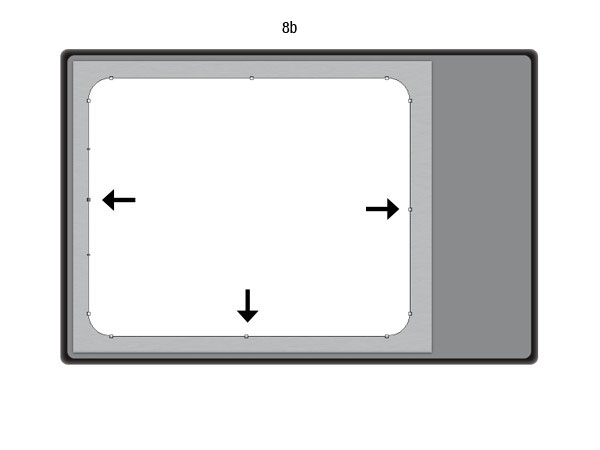 Using the direct selection tool (the white one) move the two points in the corner closer (9a).

Do the same to the other corners (9a).

Add these layer styles to the screen (10a). The screen will have some shadow in it (10b).

Next, we need to add some scan lines (vertical lines inside the screen). Create a new layer and draw a white vertical line using the brush tool. Use master diameter 4px and 0% hardness. 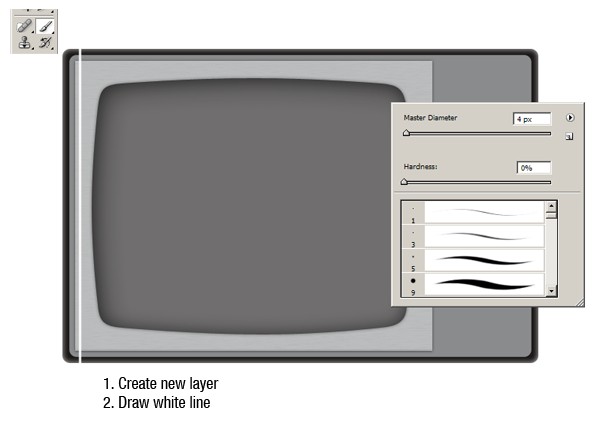 Now we need to duplicate the vertical line that we created in step 11 and arrange it as shown below. To do this we will want to use some shortcuts. Ctrl+click layer to select the line. Hit ctrl+alt+T to transform and duplicate it. Hit shift+right arrow to move it 10 px to the right. Hit Enter to accept the movement. Now press ctrl+shift+alt+T over and over until you have lots of lines. 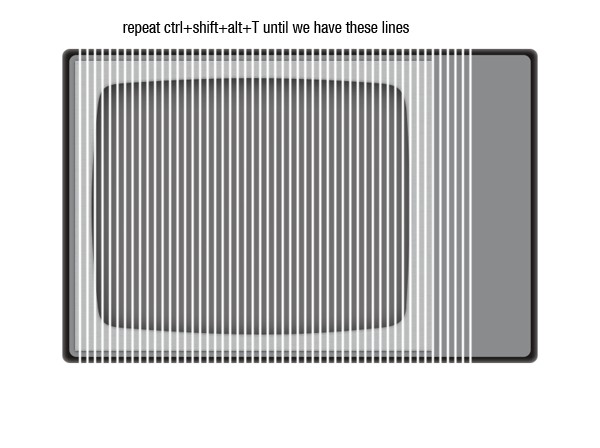 Cmd+click screen shape to create selection based on it. Click add layers mask icon and change layer's opacity to 3%.

Paint top left highlight to reveal shadow on the screen. 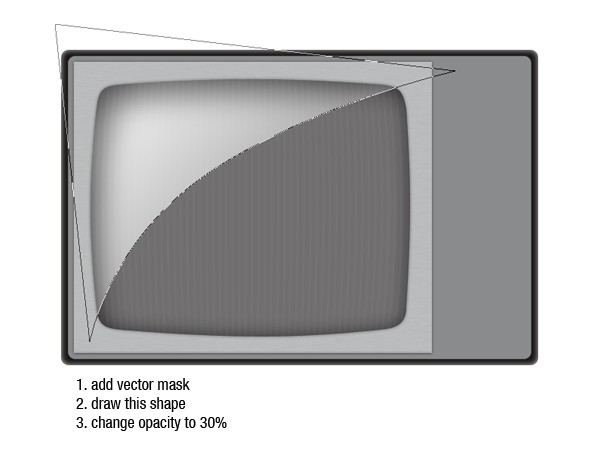 Now it is time to add a channel button. Start by drawing a circle shape and add some layer styles (19a).

Draw smaller circle on top of the previous circle. Add layer styles as shown below. 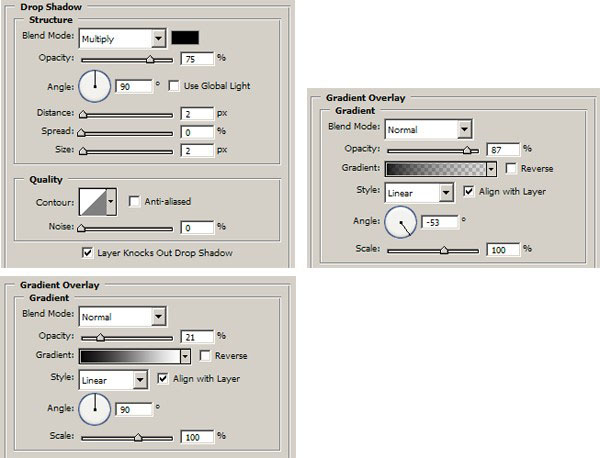 Now we will create a ring shape. Create a smaller circle. Select the path and duplicate it and resize it to a smaller size. Select both paths and in the option bar choose exclude (21a).

Create a smaller circle inside the ring (22a). Add layer styles as shown in figure (22b). 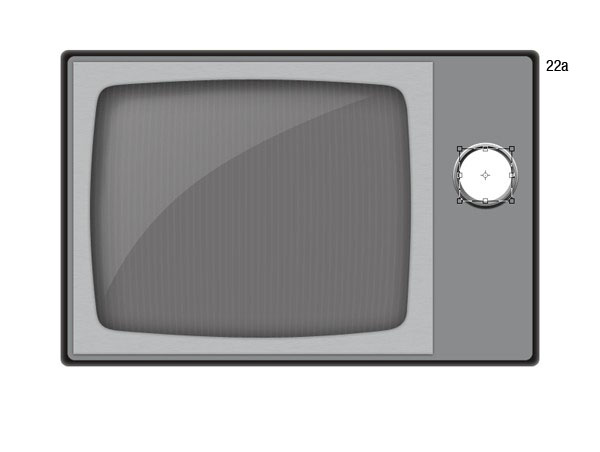 Draw a rectangle in the middle of the circle (23a). Add layer styles as shown in figure (23b).

Add a number 1 above the button selector. Add a small Drop Shadow and white Color Overlay to make it more readable.

Now we need to fix the number's orientation. Rotate each number as shown.

Duplicate the button by alt+dragging to new location. This will be the button for frequency so change the numbers to 10, 20, 30, and so on.

Next, add the TV's brand and small volume button. Draw a rectangle below the screen and add an Inner Glow and gray Color Overlay. 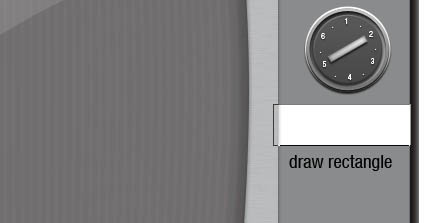 Draw the TV's logo and it's brand. I used a simple red green blue box here. To make the text stand out I added a Drop Shadow and Satin layer style. 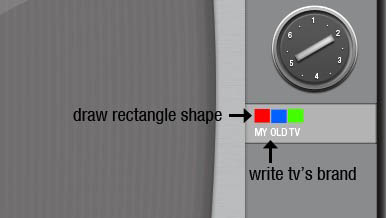 For the volume button's base draw a small circle and add an Inner Shadow and dark gray Color Overlay. 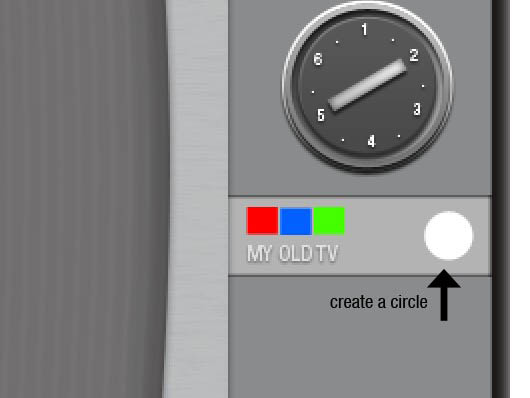 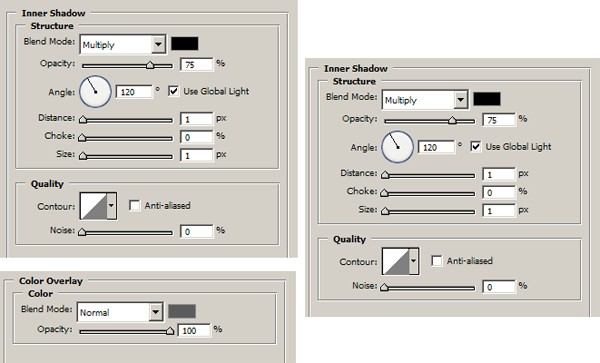 For the button add a smaller circle and give it an Inner Shadow, Satin, and lighter gray Color Overlay. Don't forget to add VOLUME label and + - sign.

Let’s add the speaker hole. Start by drawing one small circle. Select its path, hit Cmd+alt+T, and move it to the right. Duplicate again with Cmd+shift+alt+T. Repeat this until we have a row of holes.

We still need more holes. To do this just repeat the previous step, only this time we will move them down. Select all paths, hit Cmd+alt+T, move it down. Duplicate them with Cmd+shift+alt+T.

To turn the circles into holes we need to add an Inner Shadow and dark gray Color Overlay.

Draw a black circle. Cmd+click small circles to create selection. Click add layer mask icon so the black circle will be inside the holes.

At this point, we have just finished creating the TV's body. Next, we'll work on its lower part.

For its base draw a rectangle and click Edit > Transform > Perspective. Move lower corner closer.

Now let’s add some additional buttons under the screen. This might be used for brightness, contrast, color, and noise. We can just duplicate the volume button and add a very dark gray Color Overlay to make it darker.

Now it is time to add a headphone plug. Start by drawing a black circle. Add an Inner Shadow and dark Inner Glow. Change its fill to 0%. 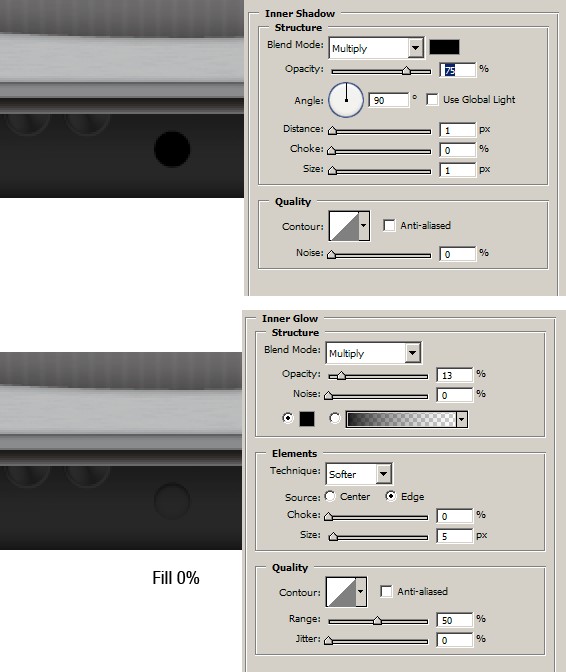 Add a smaller circle inside it and Add an Inner Shadow, dark Outer Glow, and a dark Inner Glow. Change its fill to 0%.

For the hole, just draw a black circle inside it.

Almost done! Create a new layer below every other layer. Create an ellipse selection and fill it with black. Click Filter > Blur > Gaussian Blur with a 7 px radius.

The TV still looks like it is floating. To fix this, use a soft brush and paint it black where the TV touch the floor.

That's it. We're done. I hope you learned something new from this tutorial. You can view the final image below or view a larger version here.

Mohammad Jeprie
Mohammad Jeprie is a blogger, author, and graphic designer from Indonesia. He's not an artist, but he knows a few Photoshop techniques and loves to share it with everyone. He runs his own design blog, DesainDigital where he shares tutorials and inspirations for other designers.
desaindigital
Weekly email summary
Subscribe below and we’ll send you a weekly email summary of all new Design & Illustration tutorials. Never miss out on learning about the next big thing.
Advertisement
Download Attachment
Translations