Icon design can be both fun and challenging. In today’s tutorial we will demonstrate how to create two types of icons. The first type of icon we will learn how to create is a grungy cardboard box. We will then create three glossy Adobe style icons and place them inside the box.  Let’s get started!

First, draw a Rectangle. Then Transform it (Cmd+T) as shown below. To do this, select the bottom Right Transform box and while holding Cmd+Shift+Alt, Drag it to the Left side.

Add a Gradient Overlay Layer Style for the shape we created above. Select Dark color - #ab6808 / Light color - #f8bf5b and set the other parameters as shown as below. 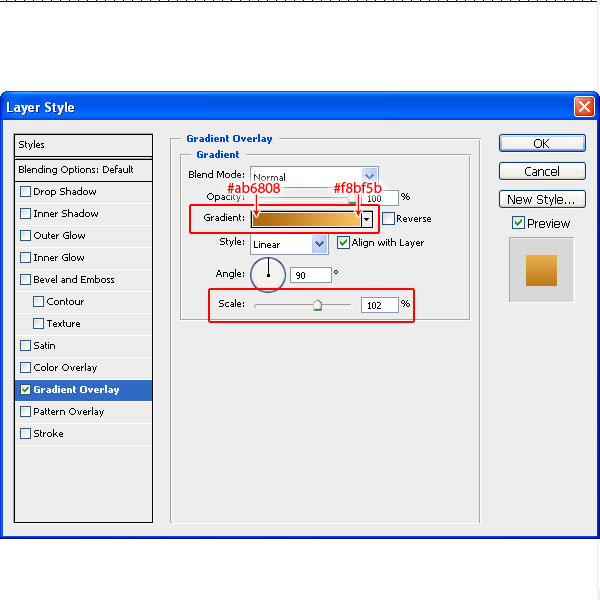 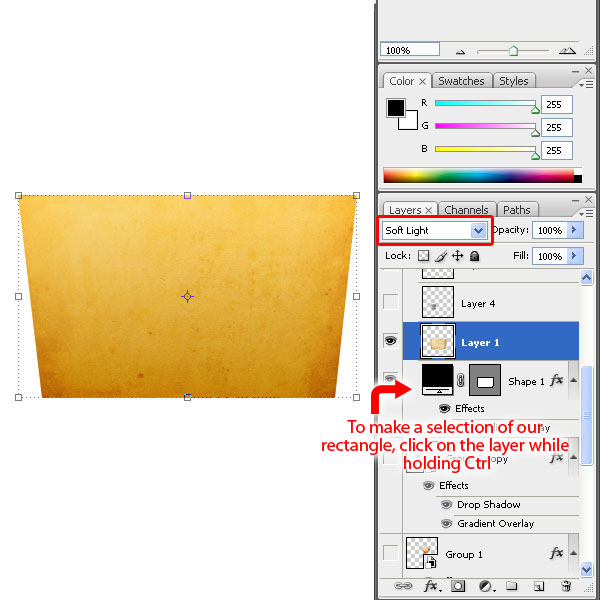 To make it look more realistic we can add some stickers to the box. You can easily find some from the Internet. Change the stickers’ Blending Mode to Hard Light. See image below. 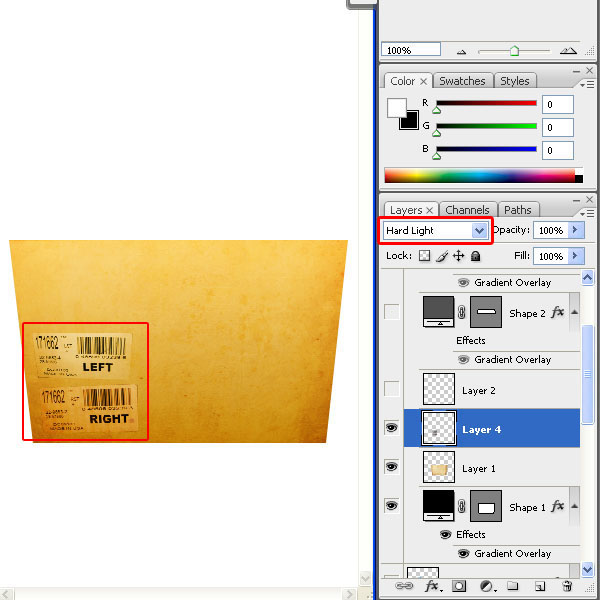 Now we are going to make the box cover for the front. Make a Rectangle and position it and scale it exactly like the below image. Apply a Gradient Overlay Layer Style for it. Use a Pinkish color for the top (#ffdcaf), and a little Yellowish color (#ffdc8e) for the bottom. Set the other parameters as shown as below.

Then make a Duplicate from it. Place it behind the original one. Disable the Layer Styles of it. Change the color to Gray (#515151).

Now we are going to add some dirt to the box cover. Refer to 'step 3' for this. But change the Blending Mode to Darken and set the Opacity to 57%. 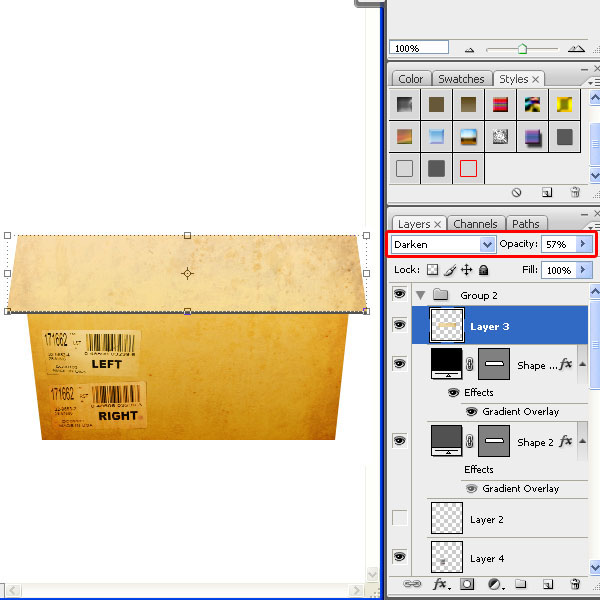 Let's add a shadow to the box cover. To do that, make a New Layer, position it under the front box cover. Make a selection using the Rectangular Marquee Tool (around the area you want the shadow). With the Gradient Tool make a gradient from the top to the bottom (in the selected area). The colors are, top - #515151 / bottom - Transparent. Transform it as shown below and set the Blending Mode to Linear Light. Set the Opacity to 81%. 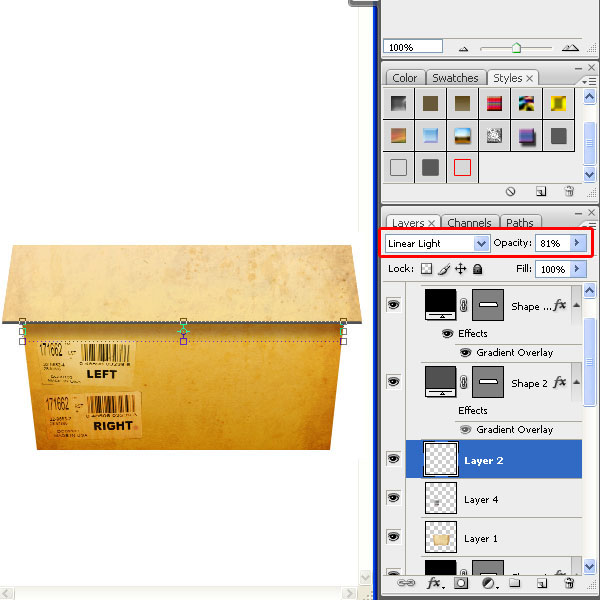 Select the first rectangle we created and make a duplicate from it. Scale down it and position it as shown below. No need to change the Gradient.

Now let's add some more dirt. Again, refer to 'step 3'. Change the Blending Mode to Multiply and set the Opacity to 34%. 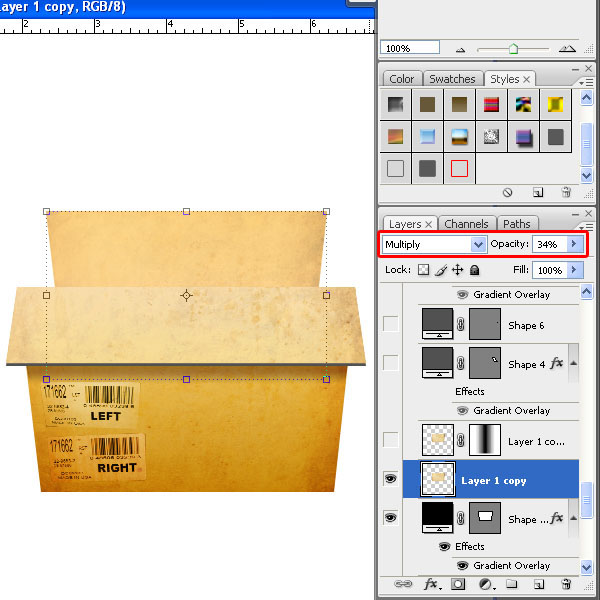 Select the texture map we just created. Duplicate it. Add Layer Mask to it (Layer > Layer Mask > Reveal All). With Gradient Tool draw a gradient as shown in the image below. (Round with red circle). Set the Opacity to 34%.

In this step we are going to make the back box cover. The process is same as in steps 5, 6, and 7.

Now we are going to make the right side box cover. Follow steps 5, 6, and 7 once again, but change the Gradient Overlay Angle to 171 degrees as shown below.

To make the left side box cover, select all the Layers we created in the above step. Duplicate them and transform them as shown below.

In this step we are going to fill the empty space with some rectangles. First, fill the right side then, draw a rectangle, and transform it as shown below. Create a gradient using the same steps as we outlined earlier. 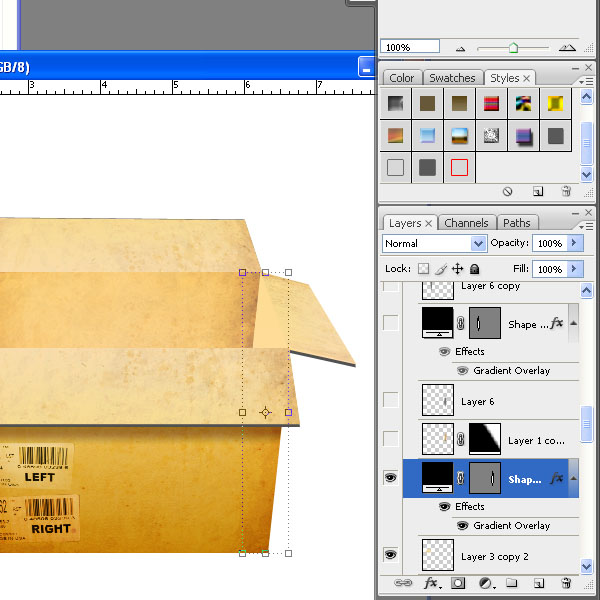 Add the dirt map too. Change the Blending Mode to Multiply. Set the Opacity to 61%. 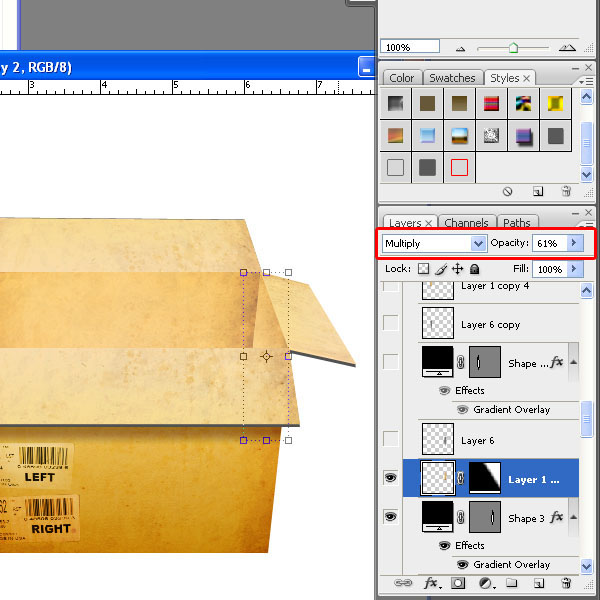 Let's add some shadow. It will add some depth to the graphic. This process is same as in 'step 8' (start the gradient from the bottom). Also set the Blending Mode to Difference. Set the Opacity to 75%. 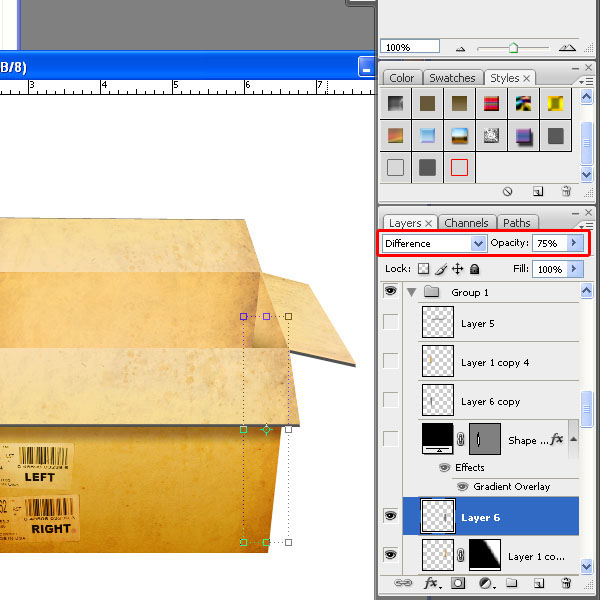 Do the same thing to the empty left side as well.

Add some shadow to the middle area.

Let's add a drop shadow to our box. To do this, draw a rectangle (as shown below). Make it Black. Set the Opacity to 88%. Add a Gaussian Blur to it. (Filter > Blur > Gaussian Blur).

Here is our final box.

Now that we have finished with our box, let’s start on our Adobe Icons. To start things off, draw a Circle.

Add a gradient to your circle using layer styles. Make the colors as shown as below. (Dark Blue - #004f7f / Light Blue - #0072b6 / White). Play with the colors until you get a pleasing result.

Change the Gradient Angle to -45 degrees.

Add a Stroke to the circle. Change the Fill Type to Gradient, and make the gradient as shown below (play with the colors until you get a desirable result).

Now let's convert our circle to a Smart Object. To do it Right Click on the Layer (under the Layers tab) > Convert to Smart Object.

Again apply a Bevel and Emboss style to the converted object. Set the parameters as shown below.

Also apply a Drop Shadow. Set the parameters as shown as below. 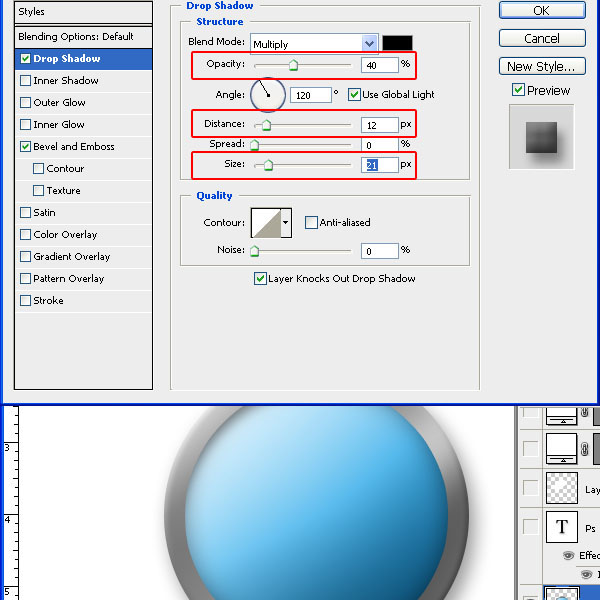 On the circle type the letters 'Ps'. Position them as shown below.

Add an Inner Shadow to the text Layer. Set the parameters as shown below.

Now let's add a glossy effect to our graphic. To do this first draw the shape as shown below.

Then make a New Layer above the shape we drew in Step 35. Select both shapes and Merge them (Cmd+E).

Select the merged layer, Make a selection of the circle.

Then invert the selection (Cmd+Shift+I) and press Delete.

Let's add more gloss to the graphic. To do that, draw a small circle as shown below. Set the Opacity to 85%. 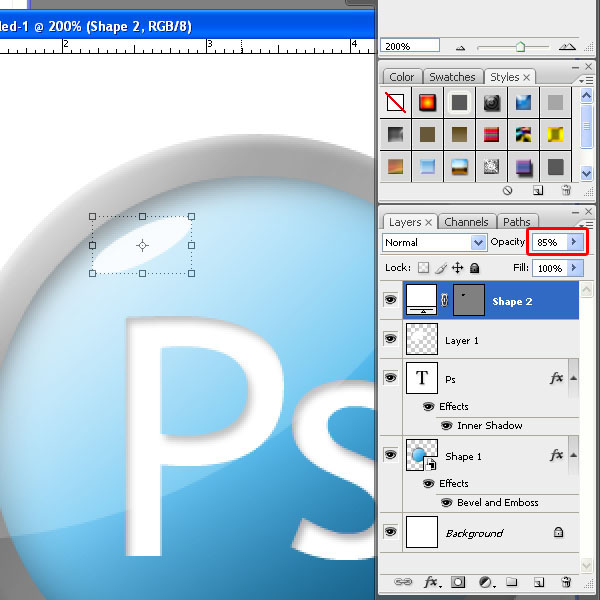 Now draw a shape as shown below with the Pen Tool. Set the Opacity to 50%.

Here is our final Adobe icon.

Create a couple more icons by changing the text and color of the gradients used.

Now place the icons into the box as shown below. To do this you will need to scale, position, and rotate the icons a bit. Finally add a gradient to the background. Fine tune the colors to get them just right. 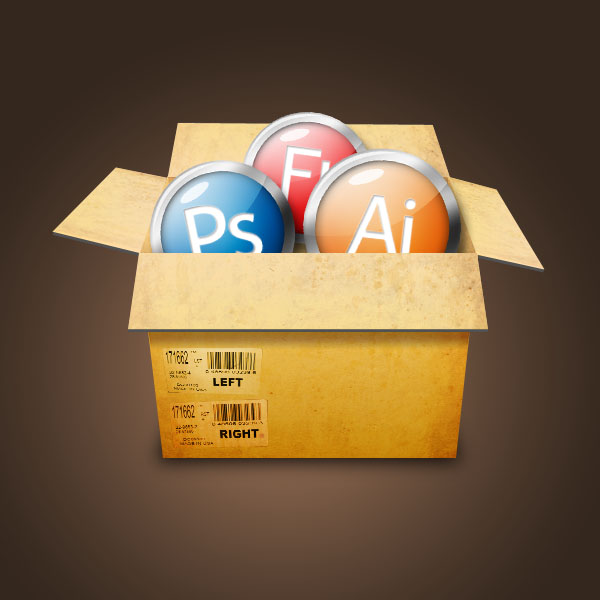 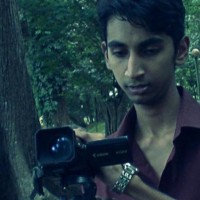 Chinthaka Sandaruwan
My name is Chinthaka Sandaruwan and I am currently a High School student and freelance graphic designer. I enjoy all aspects of graphic design, web design, and logo creation.
Weekly email summary
Subscribe below and we’ll send you a weekly email summary of all new Design & Illustration tutorials. Never miss out on learning about the next big thing.
Advertisement
Download Attachment
Translations