One of the biggest advantages of the Adobe Creative Cloud is the speed at which new features can be deployed. When the Adobe Creative Cloud was first announced, Adobe promised that their software would be updated much more frequently than in the past. Recently, Adobe made good on that promise and announced some new updates to Photoshop, as well as some of their other applications. In this article, we will explain everything you need to know about Photoshop's new features including Perspective Warp, Linked Smart Objects, 3D Printing Support, as well as all the other minor improvements. Let's take a look at what is new in Photoshop 14.2.

When you are working with photos, you might find that sometimes, your perspective is off, just a bit. The new Perspective Warp feature in Photoshop CC can help you adjust the perspective of a photo or combine photos with different vanishing points.

Perspective Warp includes two different modes, Layout Mode, and Warp Mode. Layout Mode will allow you to draw a grid to define the perspective of a photo. The finished grid appears as a 3D wireframe. Warp Mode let's you drag the grids you created in Layout Mode to adjust the photo's perspective.

Smart Objects are a great feature to help you work non-destructively in Photoshop. In previous versions of Photoshop, Smart Objects were embedded into your PSD file. In Photoshop 14.2, you now have the option to place a Linked Smart Object into your documents.

With Linked Smart Objects, the contents of that layer are stored externally, outside of your PSD by referencing files on your computer. This works in a way, very similar to how InDesign works.

By including Linked Smart Objects in your PSD files, you can improve collaboration amongst teams, as well as save on file size.

To date, a gap has existed between the content that 3D modeling tools produce and what 3D printers need to deliver reliable, high-quality results. Because 3D modeling tools aren't always capable of creating print-ready 3D meshes. This software gap made it difficult for the vast majority of creative professionals to engage in the design of 3D-printable content. Adobe is closing the software gap by integrating 3D printing directly into Photoshop CC.

For the first time, you can easily refine, preview, prepare, and then print 3D designs to a 3D printer - all directly from within Photoshop CC - opening the door for users to explore the creative and commercial possibilities of 3D printing. Some potential users of 3D printing in Photoshop include those who create prototypes for persuasive selling, makers of animated films who need a faster and easier way to create realistic character and scene models, jewelry designers, and fine artists; although this list is hardly comprehensive.

Apart from the previous three bigger improvements there are also more than a dozen additional smaller workflow improvements. These are usually referred to JDI features (Just Do It) and they are requested by Photoshop users on Adobe forums. In the following video I will show you my personal favorites but below the video you can find the full list of JDIs added to Photoshop in this update. 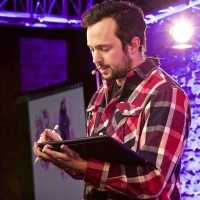 Martin Perhiniak
Martin is a Hungarian graphic designer, digital artist and an Adobe Certified Expert and Instructor (Design Master). He is currently teaching and working in London but usually travels around the UK and share his love for Adobe products and graphic design.
Weekly email summary