Ever wonder how those incredible scenes of panoramic vistas, impossible futuristic cities, or fantastic alien worlds come to life? It's all through the magic of matte painting. If only I had a dollar (hey, inflation!) for every time someone responded, "Map painting?" But you know what I'm talking about, right? If you don't, a brief history lesson is in order.

Ages ago, extremely talented artists painted these realistic scenes on large sheets of glass. It really is a lost art nowadays. The painting included blank areas that would get filled in with live action. The filmed segments were optically composited with the painting for the final result. A matte is a solid shape that is used to block out areas of the film frame so that no image gets exposed there. A simple matte shot would require a shot of the painting with a matte to block out the live area, the film sequence with a matte to block out everything but the live area, and a final piece of film for everything to be exposed onto.

With the invention of Adobe Photoshop, things began to change. What used to require laborious work in a film studio with several lengths of film and expensive, specialized cameras can now be done on a home computer with easily available software. No matter how you approach it, Photoshop has become an integral part of the process. The simplest matte paintings are ones in which the camera is stationary throughout the entire sequence. This is called a locked-off shot. Creating a matte painting for this kind of shot can be fairly easy. Only one frame, or plate, of the footage is needed. It can be opened in Photoshop and the new areas painted right on top.

The first thing to decide is what size to make your painting. In Photoshop, set your Image Size in pixel increments. Don't worry about inches or Resolution; they don't matter here. All you care about is pixel width and height. How big your painting's dimensions should be depends on its intended use. DVD is 720x480 pixels. HD is 1920x1080 pixels. Film sizes start at 2048x1080 (commonly called 2K) and can go up from there to 3K, 4K, and beyond. 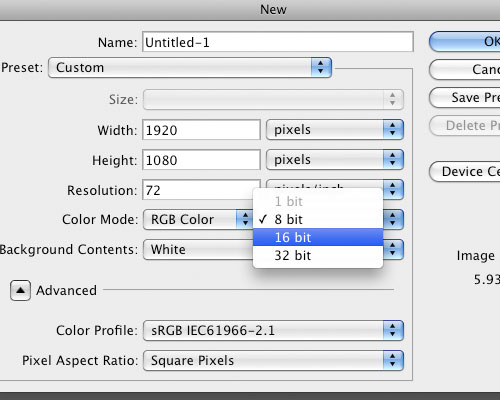 For many special effects studios, the exact resolution they work in is proprietary. So the size to make your image depends on what medium you are doing a matte painting for. A little trick employed by most professional matte painters is to work at 150 or 200% of the final size. This is because imperfections and painted artifacts get minimized when the final image is sized down. This technique can produce detail that is hard to paint by hand and can also get rid of some traces of hand painting. So, if you are doing a matte painting for HD footage, you may want to work in 2880x1620 or even 3840x2160 pixels.

You can see how easy it is to end up with huge files, so a fast processor and lots of RAM are essential. Also, remember to work in RGB mode, which has a larger color gamut than CMYK. Photoshop works natively in RGB; some of its filters and functions won't work in CMYK. Some jobs may even require working in 16-bit color mode for smoother transitions and gradients.

A common application of matte painting is set extension. This is where only the background immediately behind the action is filmed and for practical, budgetary, or other reasons, the rest must be painted in later. The simplest set extensions are on locked off shots. In working on this kind of shot, the first thing to do is determine the perspective of the scene by finding its vanishing points. This is easily accomplished with the line tool in Photoshop. Use bright colors so that the lines stand out from the background. A good tip here is to use vector lines on shape layers so that they can easily be repositioned. 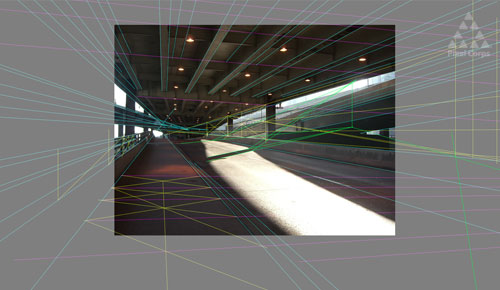 Filling in the nonexistent set is mainly done with the brush and clone tools. Pick colors directly from the source plate so that your new painting will match. But a close inspection reveals that hand-painted areas lack the photographic grain found in the plate. Since the grain in the footage animates, it is usually added back in during compositing, but the matte painter may need to provide an alpha channel of the new painted area to the compositor. 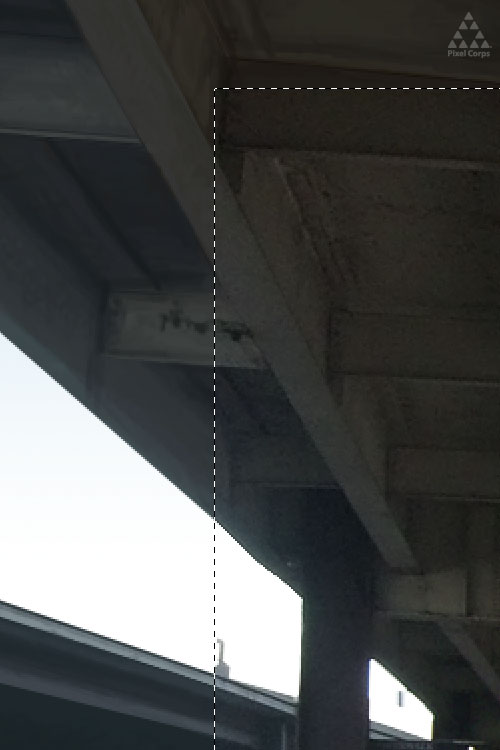 If you need to add the grain in for a still or to see how closely your painting matches the plate, Photoshop's Grain, Film Grain, and Add Noise filters are very helpful. The Grain filter is perhaps the most useful choice, because it has different types you can choose to best match your photo. Apply the grain to a layer filled with 50% gray and set to Overlay blending mode. The gray becomes transparent and all you will see on that layer is the grain, which you can take down in opacity to match your plate. Usually, only a small percentage is needed. This grain layer's opacity is 8% and it matches the plate seamlessly. 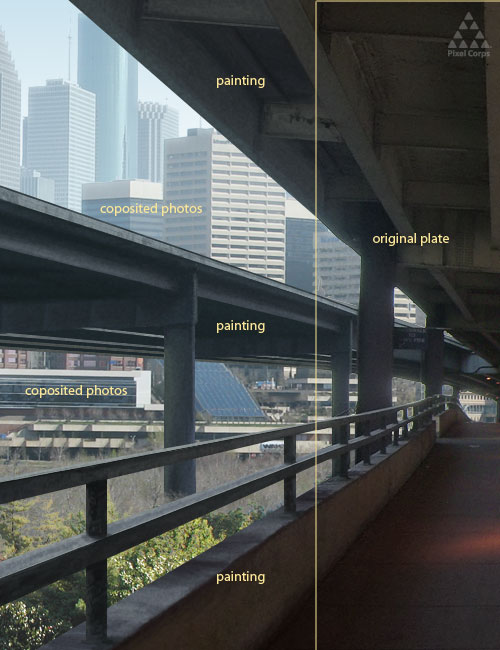 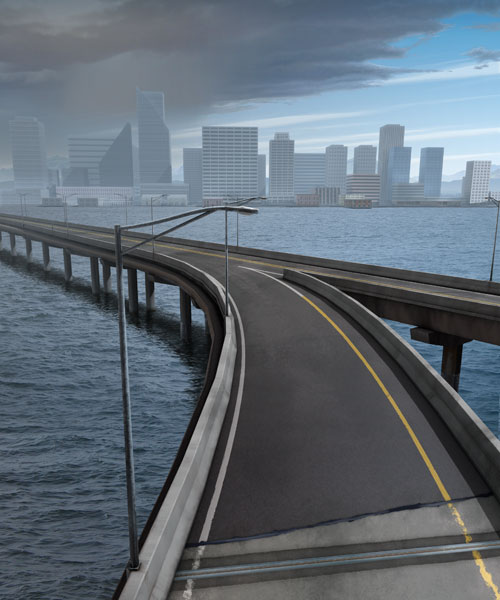 The difference in depth allows for parallax, where objects closer to the camera move more than objects farther away. Because the projected paintings may not cover all sides of the 3D geometry, the camera is a bit limited in what it can shoot, so this approach is referred to as 2.5D. More extensive mapping can cover all surfaces, but then the scene becomes less a matte painting and more a fully rendered, immersive 3D environment. 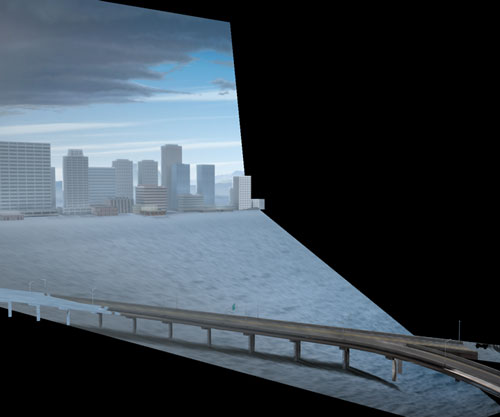 Obviously, there is much more to say on this subject and this had been just a brief introduction. Matte painting is closely tied into other special effects areas like compositing, texturing, and 3D animation. 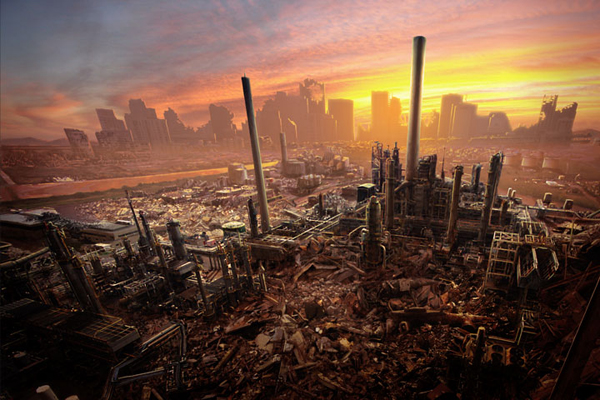 TechniquesTheoryAdobe Photoshop
Did you find this post useful?
Yes No
Would you like to provide feedback (optional)?
Cancel Submit
Want a weekly email summary?
Subscribe below and we’ll send you a weekly email summary of all new Design & Illustration tutorials. Never miss out on learning about the next big thing.
Sign up

Daniel Johnson
Daniel Johnson is a digital illustrator with a BFA in Illustration and a background in traditional media. Now a freelance artist and consultant, he worked for years as an Art Director, Illustrator, and Animator at an ad agency in Sonoma County, CA. Dan is an Adobe Certified Instructor and teaches computer graphics at various Bay Area locations. As a digital artist, he is largely self-taught and is now sharing his experience and techniques gained through years of trial and error. He won the Guru award in Illustration at the 2007 PhotoshopWorld. He was also the spotlighted designer in the May/June 2008 issue of Layers magazine. Dan is currently serving as the team leader of the Digital Matte team at San Francisco-based Pixel Corps. You can see more of his work here.