This week the assignment is to draw a character from a photo reference on Flickr. There is a vast collection of people photos just waiting for you to turn them into vector characters. It's not easy to jump into the field and sketch people in person, but sketching off of a photo reference gives you an enormous assortment of life to choose from, without the pressure of live sketching.

Today’s assignment is to draw a vector character based on a photo found in the Flickr Creative Commons' pool. This pool of photographs allow for a wide array of usages. The Attribution License is the most broad of the various categories.

When looking for someone to create a character from, consider what features grab your attention. Is this a character that might inform your later work? Is there something interesting or challenging about working with this particular photo?

Let's look at an example I did. I often draw from images on Flickr. I always record the web address in my sketchbook, and if I really like the results of the sketch, then I vectorize it. It's great practice.

Below is a photo I found of someone nicknamed the Evil Tornado. That sounds like a great character start already. I also like it when there are some props to draw, in this case his glasses and wallet chain. And yes the hair here just had to be drawn :) 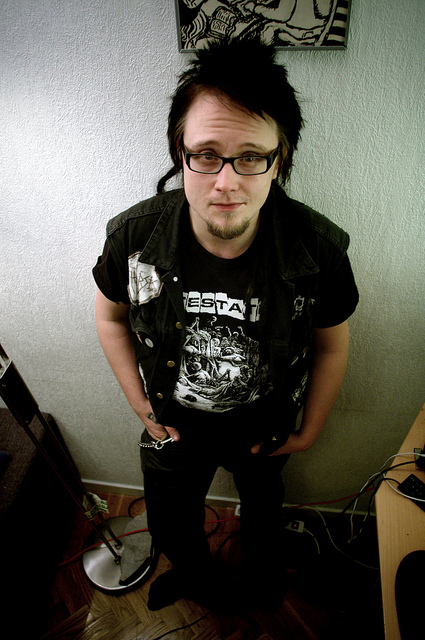 Now draw this guy. You're basically expanding your character repertoire when doing this. Try to find those defining characteristics that make him stand out, such as the hair on this character. Keep in mind though that this is practice and you can veer off in any direction you feel inspired. For example, I simplified his t-shirt on this one so that his other features would stand out more. 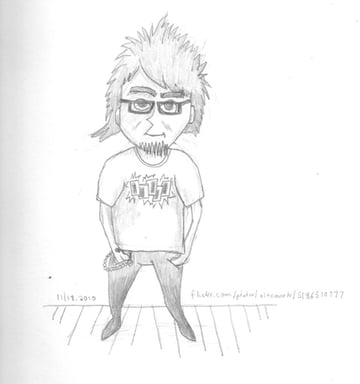 Now you may need to sketch more than one photo over the course of a few days until you get a character sketch you're really excited about. Once you are, put your character together in Illustrator.

Be sure to experiment when doing this. While doing personal practice work, it's a great time to try out different effects. In this one I've given him an airbrushed look with some Illustrator Effects, and I've used some different line colors in places. Also, the chain turned out cool by just using a radial metal gradient. 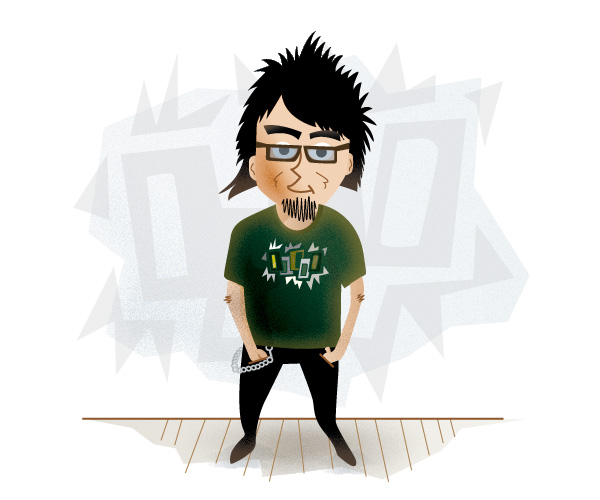 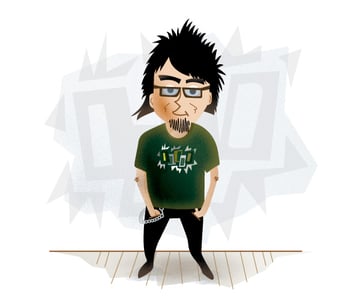 Keep in mind the focus of this assignment isn't perfection, but to practice. To build habits that help you grow as an artist. You can of course work in any style on this.

This is a great precursor to actually getting out in the field and drawing people live, which is a skill recommended in our series on Core Art Skills. I'm personally still working up to that. Learn more about Reportage in Pat 2 of the Core Art Skills series. These Live Field sketch videos are awesome as well: Guerrilla Sketch 1 and Guerrilla Sketch 2.

Once you have a character you're happy with vectorize it, export a final JPG, and then share it with the community by uploading it to the Vectortuts+ Flickr group. Be sure to tag your upload as "vtassignment-flickrcharacter" so we can see everyones uploads together, which will make it easier for everyone to comment on each other's work. You're welcome to link to your work in the comments below as well.

AssignmentsVector
Did you find this post useful?
Yes No
Would you like to provide feedback (optional)?
Cancel Submit
Want a weekly email summary?
Subscribe below and we’ll send you a weekly email summary of all new Design & Illustration tutorials. Never miss out on learning about the next big thing.
Sign up