Award-winning editorial cartoonist Patrick LaMontagne doesn’t have to go far to find the inspiration for his animal paintings. He lives in the Canadian Rockies, just outside of Banff National Park, so looking out his windows is enough to get the creative juices flowing.

This is how his series of Rocky Mountain animal paintings came to fruition. He calls them totems, because there comes a point in the creation process where the once blank canvas takes on a life of its own. "The life and personality in them is like I’m being given a gift each time, because it feels like magic when it happens. It comes at different times for each painting, but there is a moment when I’m painting one of the animals, where the personality just shows up. On more than one occasion, I’ve literally said out loud, "there you are," and it’s such a wonderful feeling," he said.

LaMontagne begins his process with pencil sketches before moving to Photoshop CS4 on his Wacom tablet- he uses the medium-sized Intuos4 model. He selects an animal photo, secures the rights and uses it as a reference to ensure he’s capturing the true nature of the animal he’s working on. Just like painting with more traditional mediums, LaMontagne starts with a blank canvas in front of him and it’s only after 15-20 hours of work with mostly custom brushes, does he meet the animal that has manifested itself on the screen. He starts the process in 72 ppi but once he’s into the intricate details like fur and hair, he increases to 300 ppi. He continually goes back and forth from the image’s history to the current file until the piece reaches a point where his changes aren’t noticeable anymore. Only then does he know his work is done.

Grizzly Bear Totem was the first in his Rocky Mountain animal series and it was the most rewarding for him because it took his artistic abilities to an entirely new level. Here LaMontagne shares with us the different stages of creation this particular painting went through. 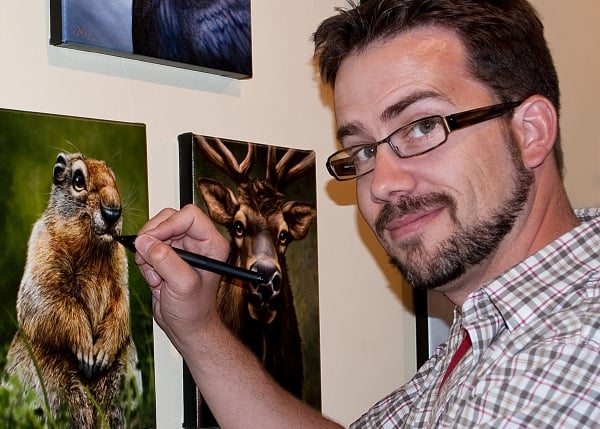 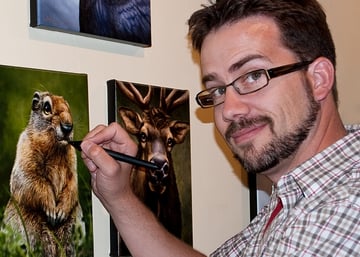 LaMontagne established himself as a caricature artist by painting people for years, so the challenge for this piece was taking that knowledge and translating that into an animal. "It was my first animal painting so a lot of it was just trial and error, (lots of error), just figuring out what would work and what wouldn’t," he said. 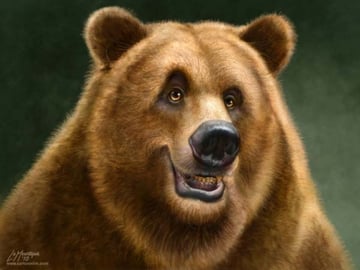 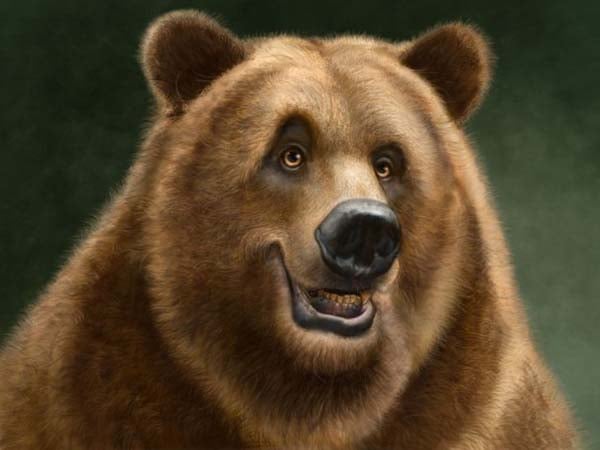 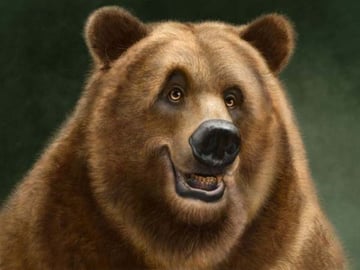 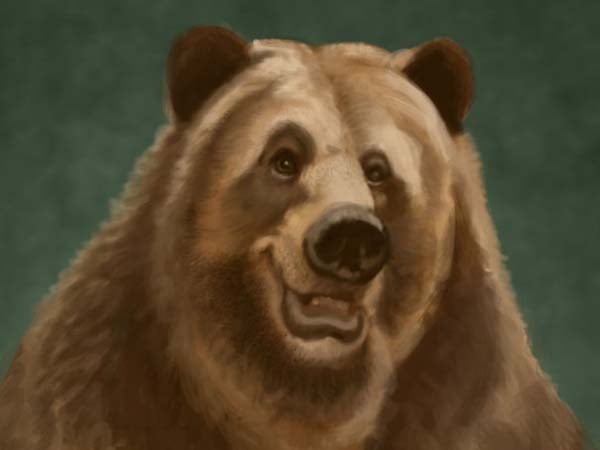 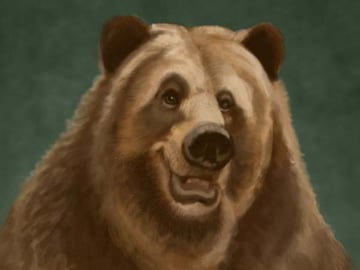 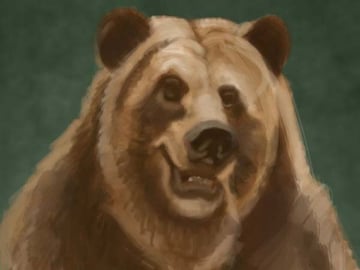 This piece was selected as "Best in Show" at this year’s Guru Awards ceremony during the Photoshop World expo. "The big challenge on this one was the fur. I really wanted it to feel like you could run your fingers through it. The expression was relatively easy to find on this one, but I wanted the eyes to just leap off the canvas or screen." 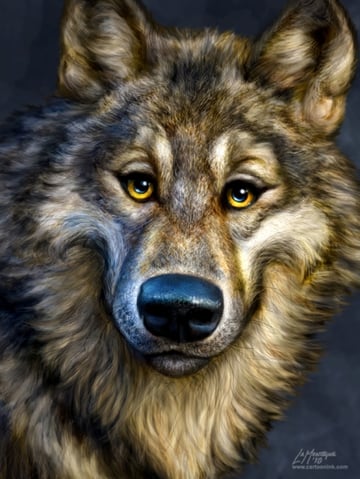 The third in his series, LaMontagne found the antlers of the elk the most challenging part because he wanted to "suggest" them without actually showing them. The angle he chose for the animal posed its own set of challenges, "I had to maintain the structure of his skull and nose, while still making him smirk. I tried to give him a big smile, but just couldn’t do it. Once I stopped trying to force it, the personality of the elk seemed to emerge on its own." 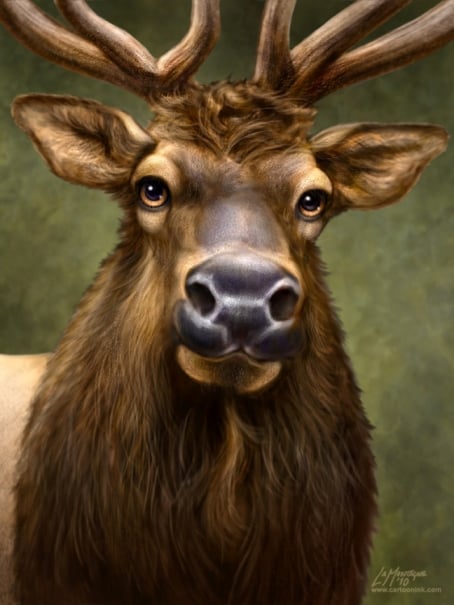 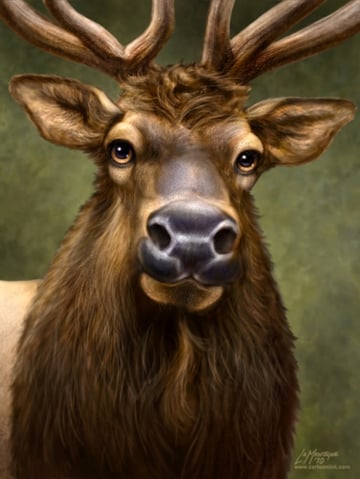 Another Guru award winner (Illustration), composition was the challenge because of the moose’s large antlers. "Expression and detail is everything for me with these and if I included the whole rack, it would mean that the head would be a lot smaller, and I’d lose the detail in the eyes and fur, so I had to suggest large antlers without actually showing all of them." 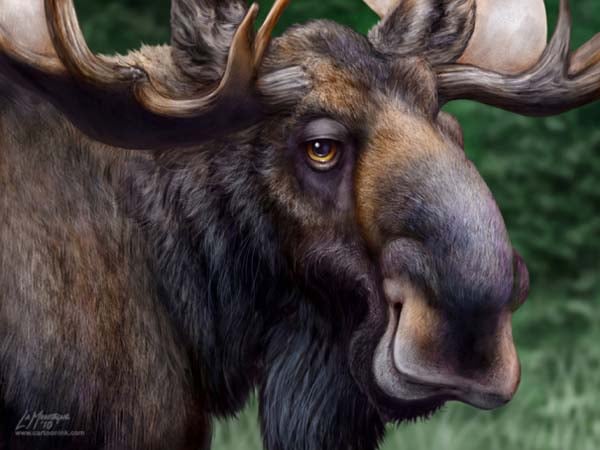 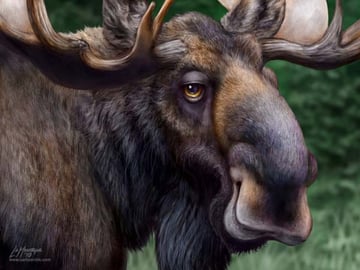 LaMontagne had to make this squirrel appear small without actually drawing him small for this piece which he did by playing with a depth of field effect in the grass. The grass in the front is painted on another layer, and then a Gaussian blur was applied to it to make it appear out of focus. "Another challenge was that the fur I had painted up to this point had all been soft, but the ground squirrel is covered more in hair, not fur, so that presented a different challenge as the two have very different looks."

LaMontagne is completely self-taught and is constantly looking for ways to raise the bar for himself. "Often I’ll finish a painting and think, "Ok, there’s no way I’m going to top this, this is the limit of my skills." But sure enough, on the next one, I’ll find a way to go just a little bit farther. Hopefully that will keep happening."

Patrick LaMontagne on the Web

You can find more of Patrick's work on his website.