Last weekend, I attended a couple of Photoshop Sneak Peek events that were sponsored by Adobe in New York City. At the event, Photoshop Sr. Product Manager Bryan O’Neil Hughes gave live presentations of some of the features they are working on for the next version of Photoshop. Some of what Hughes showed has already been announced in previous sneak peeks but he also demonstrated some never before seen features, as well. In this article, I will give you a quick recap of some of what I learned about the next version of Photoshop while I was there.

We already know that the next version of Photoshop will include a darker interface. They gave Photoshop a darker interface for a couple of reasons; to help showcase the artwork that you are working on, and to make it more consistent with other Adobe apps like Lightroom. What you may not know about the new interface is that in order to make this happen, Adobe had to create 1800 new icons and 250 new cursors. So clearly, Adobe has put a lot of work into the design of the new interface. 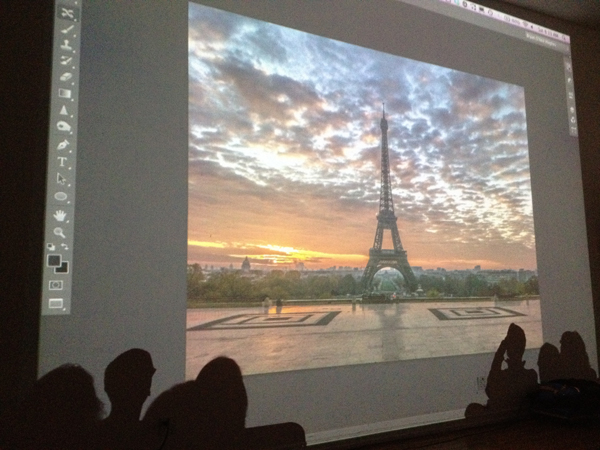 In addition to the new interface, we also know that the new version of Photoshop will include several performance enhancements that will reduce tiling and lag while working with large images. At the event, Hughes showed how the new version of Photoshop will not lag or tile while using liquify. He also explained how the liquify brush now expands to 15,000 pixels, which is a huge improvement from CS5. This is fantastic news for retouchers who frequently use the liquify feature.

In addition to liquify, Hughes also explained background save, a feature that was previously mentioned in a sneak peek video. What you may not know however is that in addition to background save, the new version of Photoshop will also include crash recovery. So if Photoshop crashes on you while you are working on a project, you should be able to recover your document. Note: crash recovery was only mentioned at the event. It was not demonstrated. So I don't know exactly how it will work.

Dashed and dotted lines is also a feature that was discussed at the event. If you’ve ever needed to use dashed or dotted lines in Photoshop, you know what an awesome new feature this is. In previous versions it could take you 20 minutes to produce this effect. It can now be done in seconds.

In addition, to the features that we already know about, Hughes also explained some previously unannounced features that had never been seen in public. These features were Content Aware Move and Adaptive Wide Angle.

Let’s start with Content Aware Move. This new feature will allow you to make a selection and then move those pixels to another part of your image without having to use multiple layers. Take a look at the video below to see it in action.

In addition to Content Aware Move, we also saw Adaptive Wide Angle, a feature that will allow you to quickly correct for lens distortion. Take a look at the video below.

What Do You Think?

What do you think about these new features? Are you excited to see them? What other new features would you like to see?