As important as information and interface design are, it's the satisfied feeling of designing something that just plain looks awesome that keeps us going during those times when the creative well is dry, when you've stared at a blank canvas for hours, when you've saved a hundred attempt.psd's, and when you're fed up of design. It's because you know that when you have that finished, polished, veritable work of art up on your screen, and you've switched Photoshop into full screen mode and you're looking at it from different angles around the room, and you're basking in the glory of your perfectly positioned pixels, you just know that this is the greatest profession in the world! 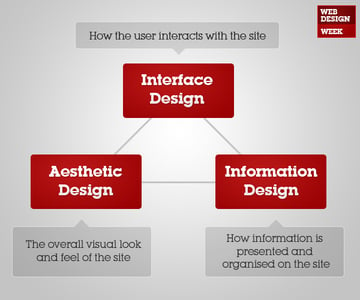 1 - Don't be Satisfied with 1 Iteration

When designing a website for a client you often have to provide a couple of different design concepts. When you feel like you've gotten it right the first time, it's pretty annoying to have to dredge up another version which you're pretty sure won't make it out of Photoshop. But over time I've come to realise that it's actually a good idea to make more than one version, no matter how happy you are with the first one.

Whether it's multiple iterations of the same design, or multiple designs, generally speaking, more time does seem to get a better result. That's not to say that you should keep adding to a design, in fact it's often better to take things away. If you are doing multiple design concepts, you can sometimes successfully merge the best elements of one design into another. 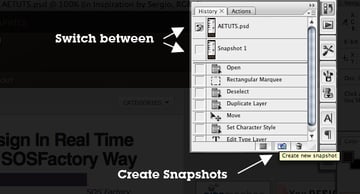 Photoshop has a cool feature that lets you make snapshots of a point in your document's history. Once you create a snapshot you can flip back and forth between different snapshots as well as the first history point and the most recent 20 or so steps. What this means is you can keep taking snapshots and then trying out new lines of thought to see where they take you. But BEWARE, snapshots aren't saved when you save a file, so you have to go through individually and save each snapshot at the end of the day.

Here's how you take a snapshot:

2 - Learn a Library of Styles to Draw On 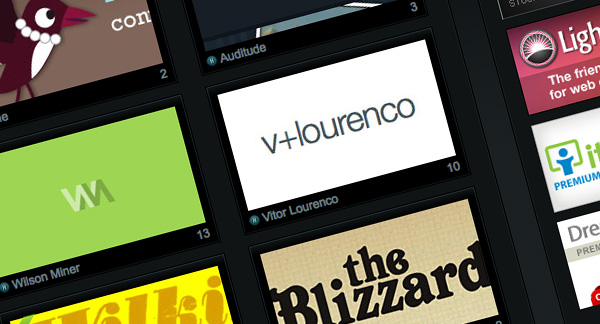 There's so many awesome styles and looks around, galleries like Creattica are a great way to see them

As I've mentioned previously it's never a good idea to just hop on the bandwagon of the latest trends and use certain styles blindly. However, it's perfectly fine to use a certain style when it's appropriate. So if you're designing a site that merits a nice, clean web 2.0 look, then it doesn't mean you should avoid doing so, just because that happens to be trendy at the time. Similarly if you are designing a site that merits a nice grungy, distressed design, then if the shoe fits, wear it!

So with this in mind, it helps to have a library of styles to draw on. When you're drawing a blank when starting a new project, it can sometimes be good just to fall back on a predefined stylistic choice and then let that guide you. Inevitably you'll wind up with something totally different to anything you've designed before, and it'll at least help get you started.

But be very wary of using the wrong style just because it looks cool, and not because it is appropriate for the client / message / content. The only antidote to doing this is to know and have a lot of different design styles. How do you "learn" design styles? Well you can start by observing and mimicking them. I love surfing through galleries of great web design and absorbing visual ideas, seeing what types of fonts work with what types of looks, and generally learning other people's techniques. When it comes time to create my own designs, that information is in my head somewhere, but when it comes out it has the unique twist of the project I'm working on as well as my own creative ideas.

3 - Throw Objects around to Look for Happy Accidents 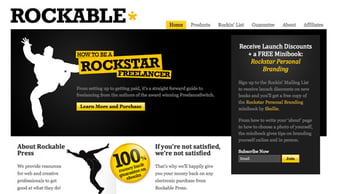 When I designed RockablePress I was just drawing random rectangles and decided that the sidebar looked kinda neat being a bit off balance, it was a happy accident.

Some of the best designs I've ever worked on were the result of what a co-worker of mine once called "happy accidents". You know when you switch off a layer, or accidentally paste in the wrong illustration, or swing the Hue slider too far, and all of a sudden you look at your screen and think "OMG this is design gold!"

I think we all wish we could manufacture amazing design ideas on cue, but let's face it, sometimes you go to the tank and you're running on empty. Happy accidents will often kickstart your creative thinking, so it makes sense to not only run with them when they happen, but to encourage them by messing about. I sometimes just move shapes around arbitrarily, try out different colours or do other "random" things to see if I can run into something I never thought of.

4 - Create a Theme Around a Visual Element

TabCorp by DTDesign takes asterisks to a whole new level

Something that I find works well, especially on sites with less inherent visual design (think corporate sites) is to make a play on some visual element. For example you might use dotted lines in your design, then you could mirror that theme in your menu, in horizontal separators, in photo collages, diagrams, as bullet points and so on. There are tons of different visual elements you might pick up and use as a theme, examples include shapes, corner types like curves or diagonals, patterns, text characters like brackets, and so on.

Of course you have to find a balance between a subtle mirroring and going over the top, but it's a useful technique to tie a site together into a consistent theme - especially as I say if you don't have much else to work with!

5 - Clean Up Every Pixel 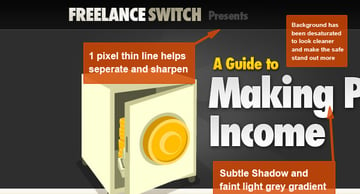 Take care of pixels and they'll take care of you. Check out my article on polishing a web design

I'm rather fond of saying that web design is all about the pixels. Visitors to the websites you design will be looking at your work up close and personal, often with tired eyes and itchy mouse fingers. It's important to look after every pixel on your page and neaten and sharpen and tidy so that your design is crisp and clear.

This means ensuring your text is well spaced both between letters and between lines, that your edges are sharpened and pixel perfect, that graphics are sharpened (but don't go too far and oversharpen!) and that you make use of techniques like 1px outlining to make everything leap off the page.

A little over a year ago I wrote a tutorial here on Psdtuts+ called about polishing a website design which has a lot of information about sharpening and cleaning up a site design. 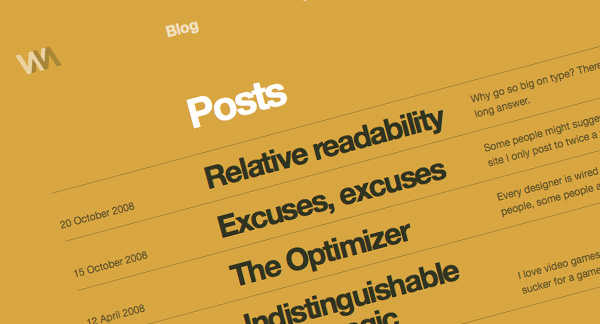 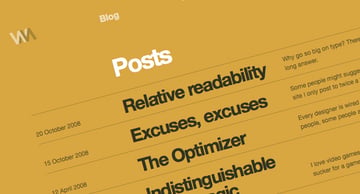 Because I taught myself web design, there are some really basic design principles I missed out on learning early on. A couple years after I had started making websites I joined a local design association and met a guy named Matt Leach who went on to be editor of the underground Empty magazine. Anyhow Matt did two things for me for which I am eternally grateful. The first is he introduced me to my lovely wife Cyan (yay!) and the marginally less important second is that he taught me to use structure in my design.

At that time I used to just throw things on a page and sometimes things lined up or were evenly spaced or kinda used a grid, and sometimes well they just sorta fell how they fell. Matt critiqued a design I had done and showed me the wonders of alignment and spacing and I've never looked back.

If you're not already doing so, spend some time doing these things:

7 - Now Mix in Some Unstructured 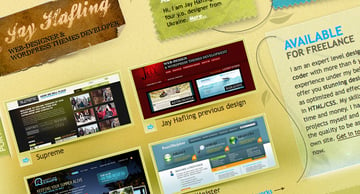 Jay Hafling has a site that is actually very structured but it feels unstructured thanks to some well placed design elements.

Once you have structure in your design and you've gotten used to aligning and being ordered and systematic, only then is it time to break out and start mixing things up. It's the old adage that you have to understand the rules before you break them.

Mixing some unstructured elements into a structured design is a really nice way of getting a result that looks ordered and comprehensible and yet isn't boring. Your main aim is to break out of the structure using a couple of bold visual elements, to vary up spacing, typefaces and use of your grid, and yet have an underlying structure.

Actually you can even just completely break out of structure altogether, but it's pretty damn hard to do well. A famous designer who is known for breaking rules - largely to do with typography, but also with grids and design structures - is David Carson.

SmashingMagazine has a bunch of articles about grid-based design, including this one about breaking out of the grid by our own Psdtuts+ editor Sean Hodge.

8 - With every project, do one thing you've never done before

When I designed Creattica Daily I decided to try mixing up the comment form a bit, it was quite a cool result and I've since used that layout on three other themes.

If I could give one piece of advice to a new designer it would be to make this a personal design habit: With every single project you take on, do one thing you've never done before. Whether it's a new font, a new grid, a new visual style, a new colour scheme, a new graphic effect, a new menu structure, a new technology, anything. Even if it means the job takes a bit longer than it should, even if it leads to a couple dead ends you could have avoided, even if it means you have to spend a bit extra to buy a new font, just do it.

This habit will do a number of things for you. It will force you to constantly expand your horizons as a designer. It will keep your work feeling fresh. And it will prevent you from falling into a design rut and just pumping out the "usual". It's a habit that you can take on early in your career as a way to become better, and then long after you are established it will keep paying dividends.

If you only take one thing away from all these Web Design Week posts I've been working so hard on, make it this: to habitually push yourself as a designer, to try new things, to experiment, to always be learning, and to never stop finding joy in new techniques, styles and ideas.

This Post is Day 5 of our Web Design Session. Creative Sessions
« Session Day 4Session Day 6 »
TechniquesAdobe Photoshop
Did you find this post useful?
Yes No
Would you like to provide feedback (optional)?
Cancel Submit
Want a weekly email summary?
Subscribe below and we’ll send you a weekly email summary of all new Design & Illustration tutorials. Never miss out on learning about the next big thing.
Sign up