The Super Bowl is the most popular sporting event in America. Each year, the two best teams in the NFL square off for a chance to win the Vince Lombardi trophy and become Super Bowl Champions. To commemorate the occasion, every year they issue a poster to help promote the event. In this article, we decided to bring together 25 of the best-designed posters and programs from the various Super Bowls, just in time for this year’s big event.

Since the Super Bowl has been around for almost 45 years, there have been a lot of posters made for this occasion. During the early years, there was no such thing as digital art. This means that the methods used to produce these designs were quite different from decade-to-decade. Take note of how these posters have changed throughout the years and let us know which one was your favorite.

Our first Super Bowl poster was the first ever used for any Super Bowl, this classic poster doesn't feature any digital work at all. It features a close range photograph of what looks to be a football player mold. As you can see this one dates back to 1967 so there wasn't much they could have done at the time.

The next Super Bowl poster takes a more colorful approach to illustrating this epic showdown. The artist who created this decided to make a collage of an ultimate athlete using the stars of the NFL at the time. This was a very creative approach and can be looked at as one of the best posters in this collection.

The third Super Bowl took place in 1969 and this poster is a painting of two players from the apposing teams that would play each other, the Baltimore Colts and New York Jets. Not many posters after this one actually showed real players from each team, so this is another classic one with some simple yet effective art direction. 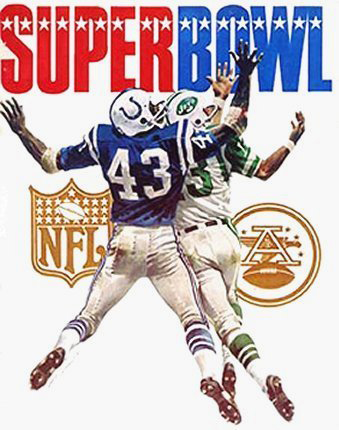 Next we skip to the fifth Super Bowl and take a look at the program from the event. Another unique way of illustrating the showdown that would occur on that night, this time it looks like a sculpture was made and then photographed. The details on it make for a fantastic sculpture and one of the best Super Bowl posters in this set.

The tenth Super Bowl was one of the first to have its poster feature the coveted Vince Lombardi trophy, many Super Bowl posters after this followed the pattern of having the trophy in the posters. This very simple yet elegant shot of the flag and the trophy make for a good color combo that is pleasant to the eyes and gets its point across. 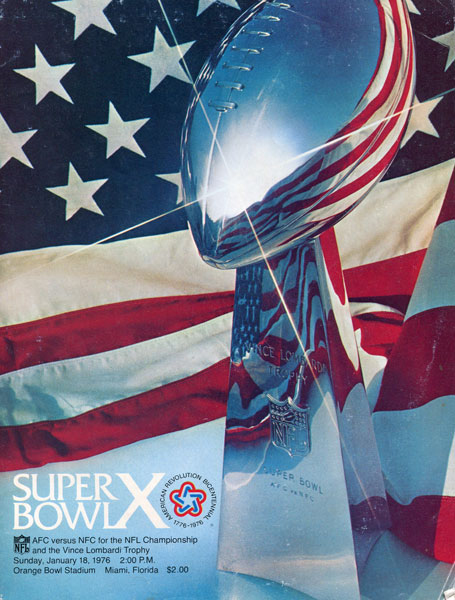 This Super Bowl poster was one of the earliest to follow the formula of Trophy + Location. A lot of the posters that follow will illustrate the location of that year’s Super Bowl and mix it in with a shot of the trophy. This one takes a very colorful approach of illustrating New Orleans with a parade going on in front of the place where the game would be played, the Superdome. 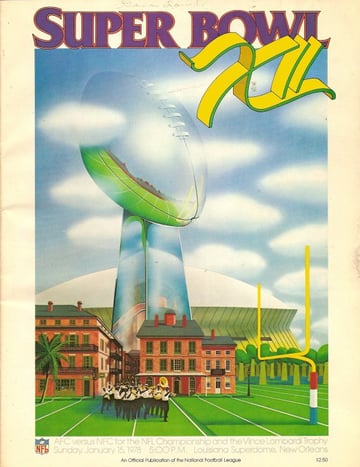 Super Bowl Thirteen took a more modern futuristic approach to the poster, the neon gridlines and soft skyline gradient made for a very original poster. This type of design style is used by many artists now so it is very interesting to see that it was used in 1979 in this specific context. 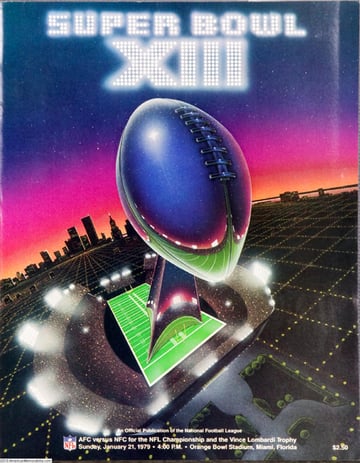 Hollywood was the setting of the next Super Bowl and the artist who created this poster definitely did the right thing by incorporating the Lombardi Trophy into the California skyline. Famous landmarks like the Hollywood sign were also painted into the scenery to give it an authentic look, and finally the warm sunset ties in perfectly with everything else.

The sixteenth Super Bowl took an abstract turn with its poster design. This elegant Super Bowl poster featured the Lombardi Trophy as a centerpiece that is surrounded by other intricate and ornate silver statues. This painting was done extremely well, as the quality is perfect and the colors really mesh together well. This abstract look definitely worked and did not require the use of any scenery or football related items aside from the trophy. 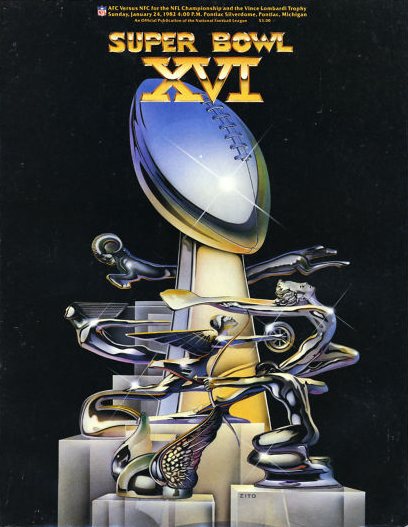 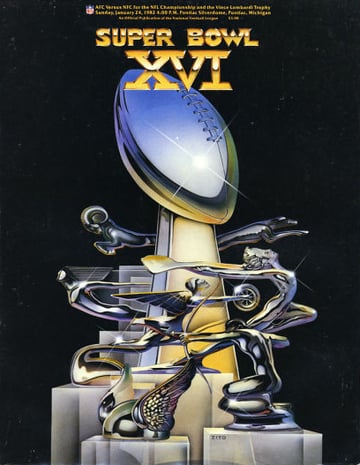 The year after the Super Bowl was back in California and the poster that was created definitely reflected that. I guess having in it California was a big deal and so a lot of flashy painting was used. This great color scheme with neon lights and the purple sky blended perfectly with the trophy again. This was another solid poster that utilized the common formula used by these Super Bowl posters. 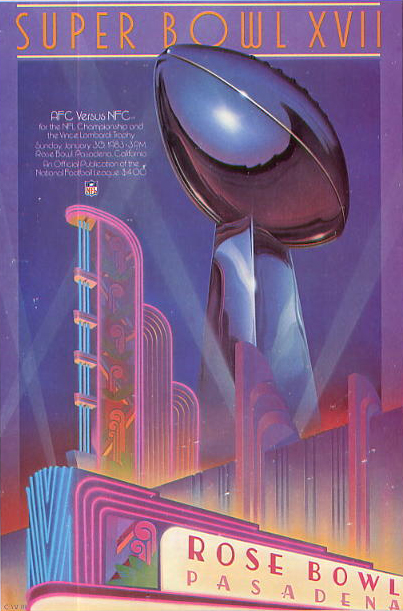 The twentieth anniversary of the first ever Super Bowl came in 1987. The tagline featured in this simple Super Bowl poster already says a lot and does not require an intricate design like the rest of the posters. The point was easily made with that tagline and a simple shot of thetrophy and the "XX" logo. 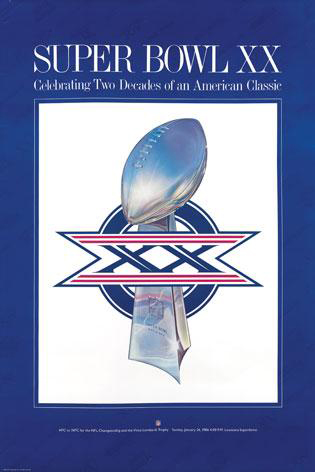 Three years after that anniversary the Super Bowl was set to be played in Miami, Florida. If you are not aware Miami is known for its beaches and the artist was fully aware of that when he painted this poster. The trophy is standing on a beautiful beach in front of another sunset. Nothing too original but the detail and quality definitely take it that extra mile. 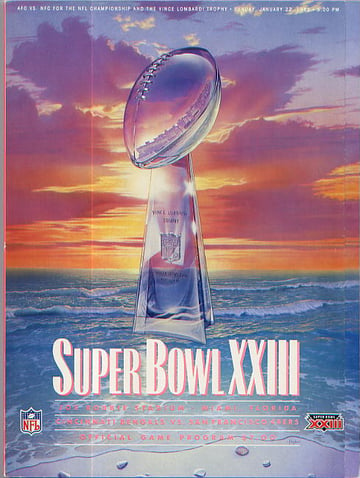 New Orleans was the setting for the next year’s event and this setting is famous for its yearly Mardi Gras parade which was illustrated in that years poster. The artist did an amazing job of painting an abstract take to this annual celebration.

This poster didn't use the traditional methods like painting or photography; it took a more digital approach. Mixing the location, the Super Bowl itself, and some ornate decoration this artist created a visually astounding poster. Georgia was the setting for this year’s showdown and it was illustrated beautifully in the main logo of the poster.

Three decades had passed since the first Super Bowl was played and this poster used a different type of art direction than the last anniversary. The desert of Arizona was the home of this game so it was fitting to have the trophy incorporated in a very colorful and wonderfully painted desert.

Miami was chosen again to host that year’s game but this time there was some diversity with the poster. No sight of a beach or a sunset, which was a good thing because a repetitive image would make for a bad poster. The artist surrounded the Lombardi trophy with some well-known animals and figures of Florida. The art style used here was also very unique and a nice alternative from the paintings used earlier.

Atlanta, Georgia is famous for its Georgia Peaches and that was the clear theme that was used by the artist who created this Super Bowl poster for the event held in Georgia. This might not have been officially used but the realism and detail in the painting makes it an amazing example of incorporating location and the coveted trophy. 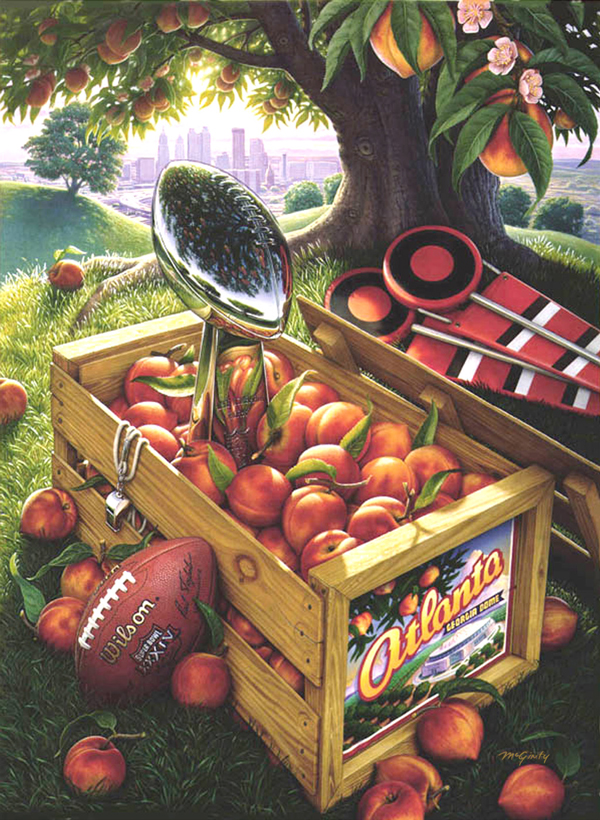 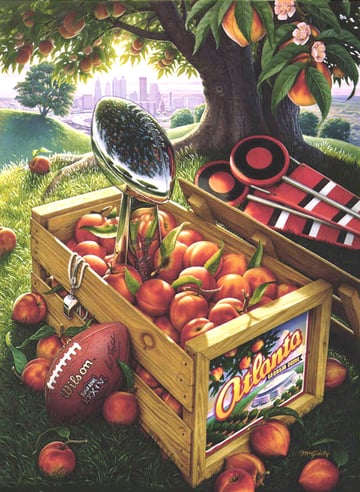 The Tampa Bay skyline was illustrated in the next poster featured. The art direction used took a more modern turn away from theextremely detailed paintings, the more digital approach created a colorful scene using simple shapes and shading. 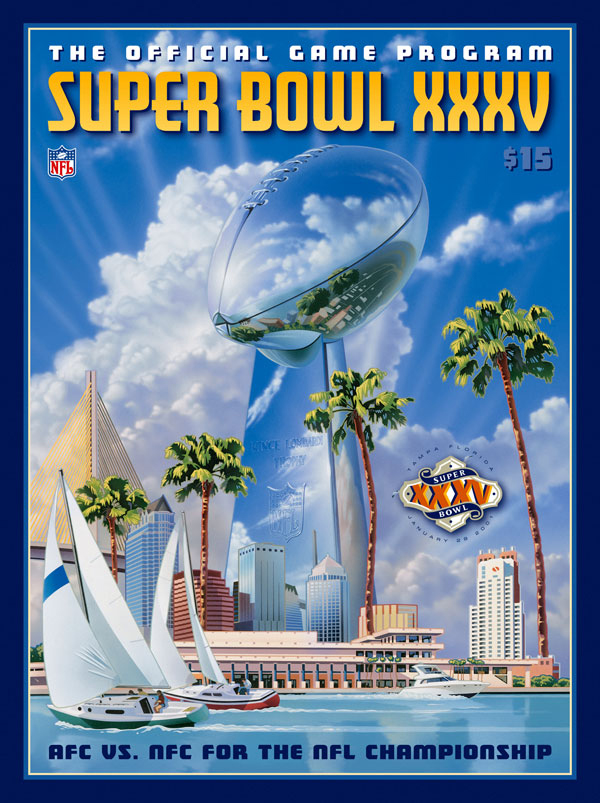 Patriotism was the theme of this poster and it was warranted because of the year it took place (2002), only a few months following the 9/11 attacks. Not much needed to be done here as a simple reflection of the flag provided its point clearly. 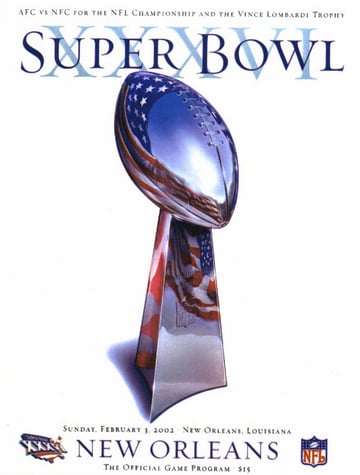 One look at this poster by a designer they can easily tell you this one was made in Illustrator, this vector made poster of the Houston skyline makes for a very nice addition to the collection of Super Bowl posters over the years. This is one of the earlier ones that feature some of the newer programs that we are accustomed to using. 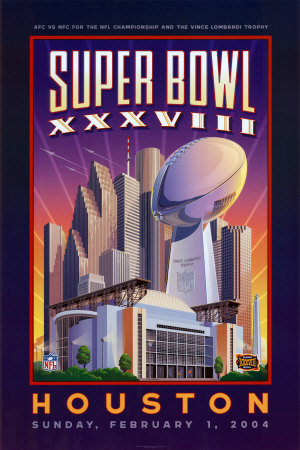 Another cartooned version of the event takes place in this poster; a great set of colors was used for the whole environment. Everything in this poster fits together and it is all centered around the main goal of the night which is the trophy. All in all the idea is heavily used but the execution is top notch.

Another Florida Super Bowl means more posters with palm trees, water, and the bright sun. This one is no exception, although instead of a painting we have a manipulated photograph of a pool and some common south Florida imagery. 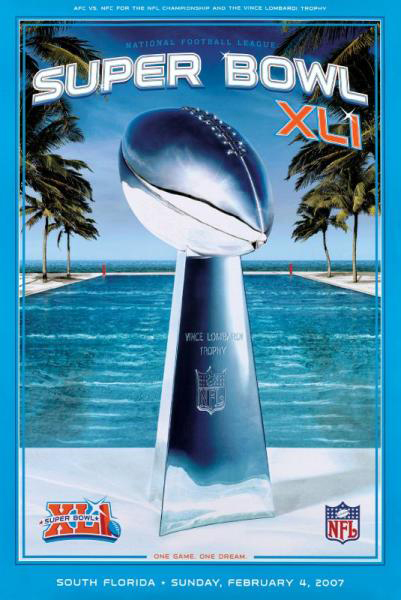 This Super Bowl was held in the desert and like the last one held in Arizona the poster features the same types of setting. The execution is a tad bit different this time around but the whole point being made is the same.

Yet another Super Bowl was held in Florida, but this time we see an unusual approach to the poster. No sun, not even a palm tree in sight. This is a fresh take on the poster because it has nothing to do with its location. Just a quality design, which is a photograph in this case, all centered around the Lombardi Trophy.

Lastly we have the poster for this upcoming Super Bowl that is to be played in the Dallas Cowboys newly built stadium. A very cool Illustrator made logo is the main focus of this poster and right under is the newly build mega-stadium that has gotten the chance to host its first Super Bowl. 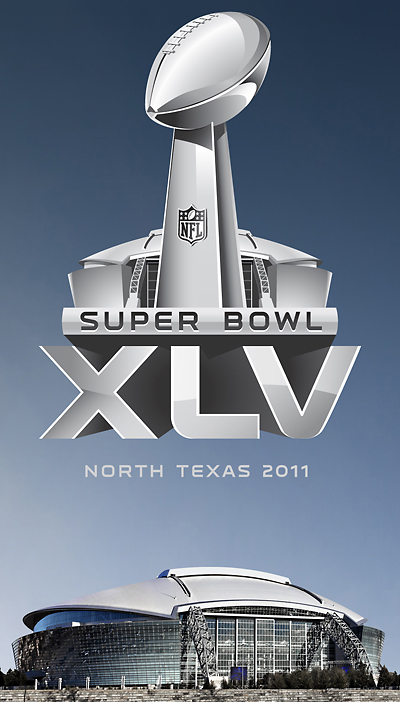