Conceptual art has to be one of my favorite themes. It's a piece of art that plays out an event, situation, or concept to it's viewer. Sometimes you get it straight away on first glance, sometimes it's a real head scratcher. Throw vector into the equation and I'm in heaven. Today I give you twenty pieces of amazing vector art from the galleries of deviantART to make you think, inspire you, and hopefully put a smile on your face. 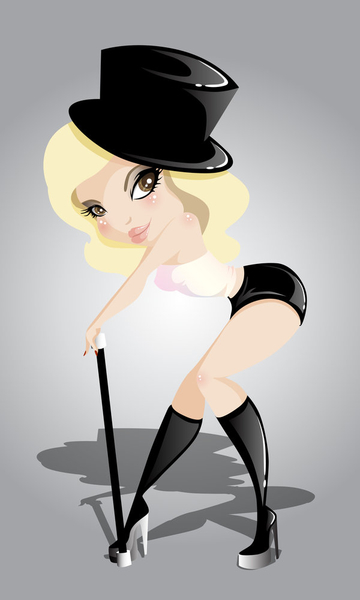 Just Like A Circus is one of a series of illustrations by FlashParade, this being one of Britney Spears. They all feature female solo artists of the past five years in a style regularly used and associated with the vector artist. Each one is filled with vibrant colors and subtle gradients in a cheeky and often tongue in cheek pose.

I chose to feature the Britney Spears themed illustration above the others as there are two concepts involved. One being that of the image of the singer and the second of the song "Circus" - released from her last album. In it she describes herself as a ring leader, so this naturally has carried over into characters design. 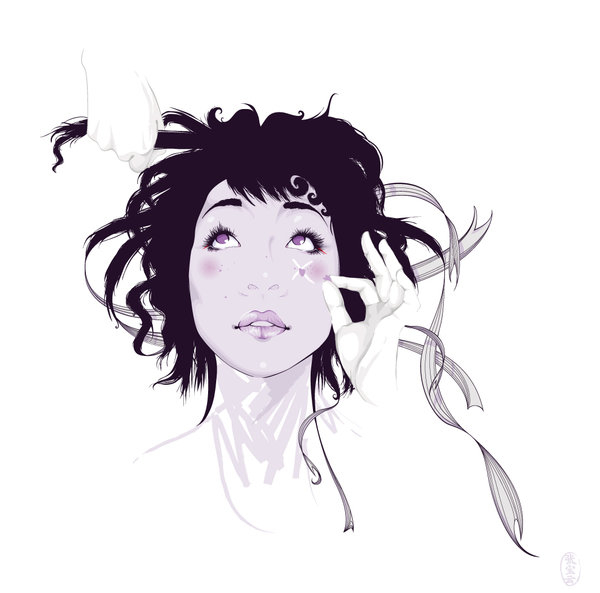 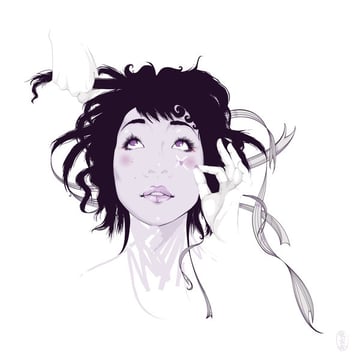 Cryssy has a gallery full of pastel shades and beautiful girls and Control is a great example of showing a subtle theme through vector.

The initial focal point is the elegant portrait and it's not until your eyes wander outwards that you see the elements of "control" in it. The eyes lead you to look towards the hand grabbing her hair, catching her unawares while another hand takes a piece of her.

TFDC (aka FlowIsKing) is one of my favorite abstract and typography artists. I remember him showing me this piece and I was blown away. While it still maintains it's abstract feel, it also plays out a theme of distance between two people. Whether they are lovers or not isn't really important, more the sense of there being many days and lands to cross before the other is reached. This is played out further by it's quintych set up (a piece of art across five panels).

Here's a concept that is a visual treat for the inner geek. Phig mixes two iconic brands in one... the Star Wars Stormtrooper and the three stripe branding of ADIDAS. Maybe it's one of those pieces which you're just supposed to enjoy looking at, or maybe there is a purpose to these elements being brought together. The first thing I saw when I viewed this was that it might be a comment on mass production. Stormtroopers were no doubt mass produced as well as items for a sportswear company. They are both there to service a purpose and help enhance the task at hand. Who knows... what do you see?

There are many set themes ready to be tackled by artists and one which is regularly visited is the Tarot Card theme. Lanitta has injected her style of illustration and vector rendering in this amazing Tarot Card for Justice. Without reading the bottom of the piece, you can tell it is for Justice by way of her scales. What I love especially about this vector is the detailed hair rendering and the contrasting colors of the blue and orange/ginger mix.

A good way to get your creative conceptual juices flowing is by entering contests. This piece and the next are both from entering the same contest of "Fairytales gone bad". This is an eerie portrayal of Little Red Riding Hood. I'm not sure what element makes it more haunting, the pale, porcelain skin or the small drops of blood from her mouth. Maybe her role was reversed with the wolf? Now that's a scary thought.

Malice and Friends by Pixelledanddead

Often a common theme to visit, but never in such a unique way. Malice and Friends is a play on Alice in Wonderland which was also used for the "Fairytales gone bad" contest. Pixelledanddead has put an evil spin on some of the iconic elements of the story, including a poisoned "drink me" bottle and S&M themed flamingos. Cleverly done and a treat for the eyes.

The Call of the Can Opener by Lanbridge 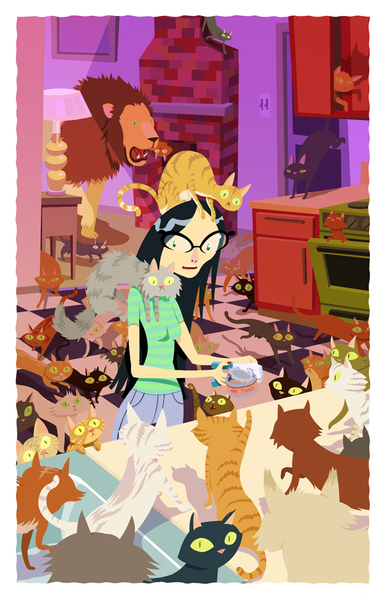 Being a cat owner, I certainly know this situation and I'm sure others will. The Call of the Can Opener comically illustrates the desperation of felines on the sound of the opening of a tuna can. Each cat has been drawn and colored individually and seem to be running towards the owner in many directions. Not only that, but look twice and you'll see another, larger feline wanting to be fed! 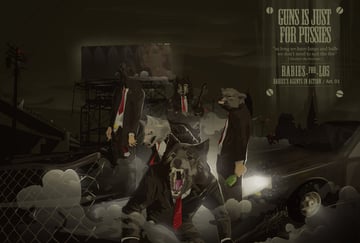 This is a haunting piece with plenty of attitude. A display of werewolves on a rampage at night. It's the finer details I appreciate most about this piece: the billboard in the background, the city sky line and the suit detailing. Such a marvelous piece and an original take on the horror of werewolves.

Force's Asthmatic Side by Adralves 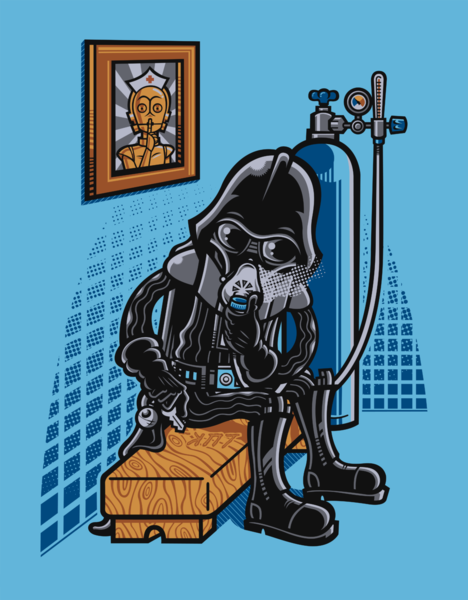 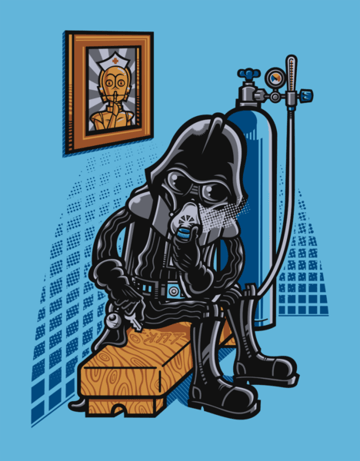 OK, another Star Wars themed piece and this time with Darth Vader himself. Ever wondered why he had a gasping voice? Well maybe he did actually have asthma! Although it's a simple put together piece, in a way with the limited palette and shapes, but the detailing has been pulled off really well. We have the C3PO portrait as a rather camp nurse on the wall and the carving of Luke's name in the bench. Very cheeky and definitely brings a smile to my face!

CQCat often has a fashion theme throughout her illustrations and this is no exception. Rebirth is a piece dedicated to the late, great Alexander McQueen using one of his pieces from his Fall/Winter 2010 collection. I have the pleasure of owning a print of this piece and it's simply beautiful to see. It screams the quirky style of a great fashion designer who will never be forgotten.

Crazy for Vector IV by AtixVector 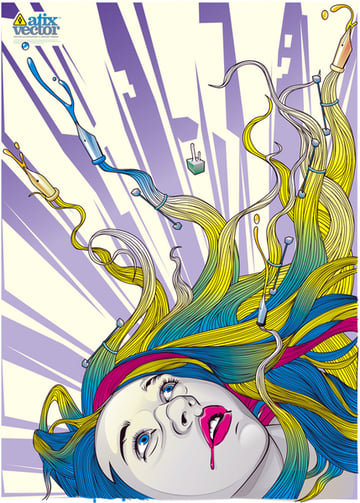 Part of a series, Crazy for Vector IV has to be my favorite piece by AtixVector. This work uses the often referenced Pen Tool in connection with vector, bold line art, and dynamic colors, to demonstrate being crazy for vector! Such a simple concept and a great execution. What I love most about this piece is how the hair is rendered. Chunks of hair split into sections using lines to illustrate the flow of hair, coupled with gradients. An inspiring style and concept for the vector lover! 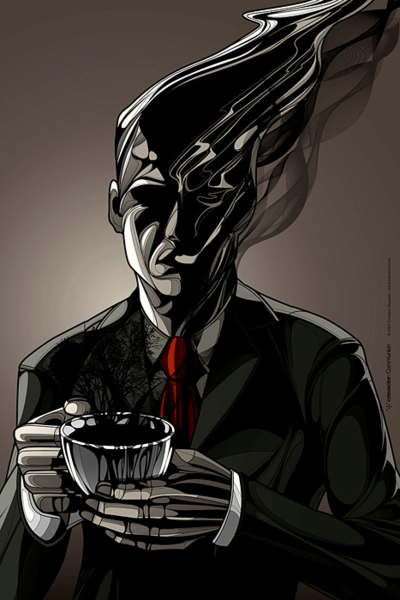 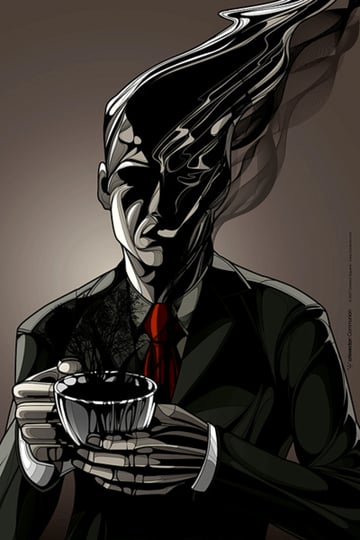 I've always seen this piece as a bit of a thinker. One day it could mean one thing to me, the next a completely different theme. To me it's reminding you of the circle of life and it's often seen as a positive thing... that when you die you nourish the earth that grows the food we eat etc... however I'm seeing this as the circle of life in a negative sense. Yes, the man is taking from the good earth to nourish himself, in fact filtered and boiled the best from what nature has to offer, however what he is putting back into the earth from himself is negative... his evil thoughts and lack of you could say vision. 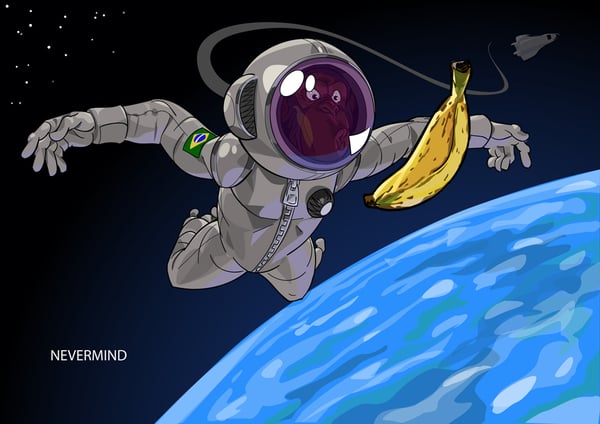 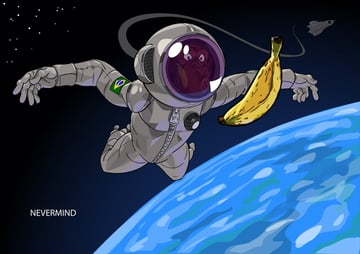 Mixing comedy and fiction this time with Astronaut Chimp. What I love about this piece is the non-sense in craving something you just can not have. Imagine the frustration of our monkey friend... even if he reaches the banana, he can't take the helmet off to eat it. The characterization of the chimps face is absolutely priceless! 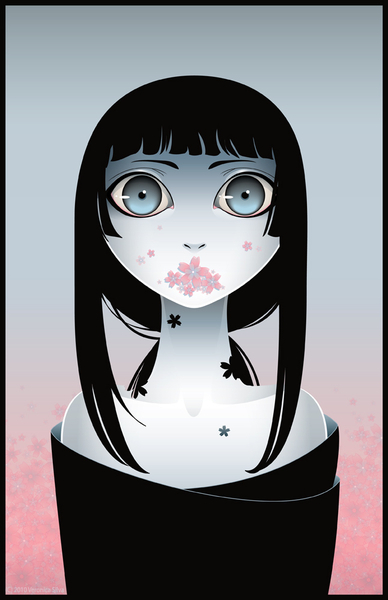 I adore Bumble V's use of color in her illustrations and I love it's use in this piece. Using the concept of silence, the gradients are being used to illustrate the draining of color, maybe life from this character. The life signs are there still and these are shown by the glazed over eyes. Simply beautiful. 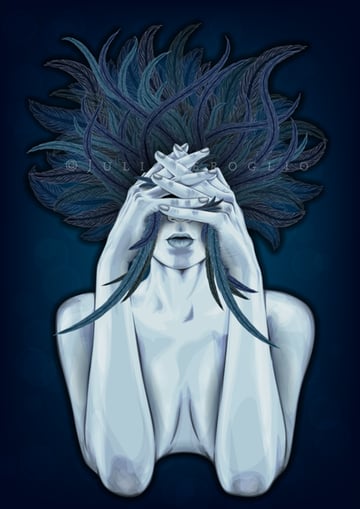 Conceptual pieces which are more personal to the artist can often be interpreted in different ways for the viewer. The artist may use elements that they associate directly with themselves, rather than what the audience may see. In this piece, Healing is seen as a private progression. With the hands covering the face, hiding the process from the viewer and elevating it's connection with the artist even further. The feathers could be representing flight, which is often seen as a release or freedom. Maybe this was part of their healing process. 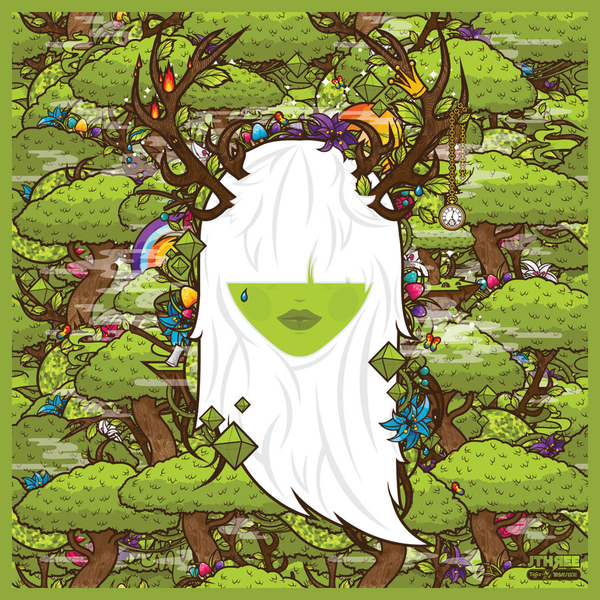 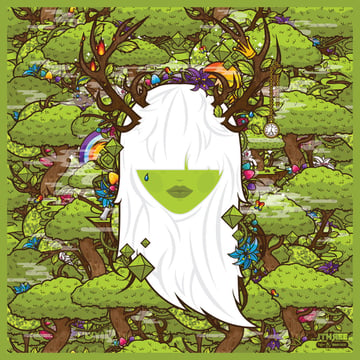 J3Concepts uses a contrasting theme of being lost in the forest for Mother Natures Lonely Laugh. Not being able to see the wood for the trees. I love the chaos of the many elements within this illustration and the smaller details - such as the clock, axe and jewels, which draws you further... maybe distracting you away from the loneliness of Mother Nature. 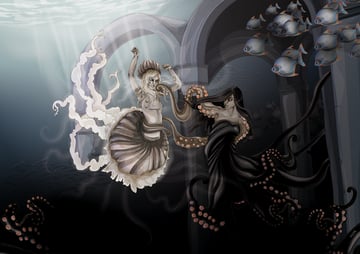 I'm almost speechless every time I visit this piece. Dance is probably in my top ten vectors, if I ever created such a list. I'm amazed at it's original concept of a jellyfish and an octopus anthro character interacting together. Furthermore, the unique way of rendering such a scene has been pulled off in a stylish manner.

Literature is often a good source of inspiration and I love this piece by AntonVanDraco with his own take on "Romeo and Juliet." Each little character has it's own expression and coloring depending on the side they are on. Again, it's the little details I'm loving with this... can you see the guy thinking of bombing?

As I'm a fan of conceptual work, I thought I'd share one of my favorite pieces of my own work. This from an ongoing series referred to as "Gasmask Angels," with titles referring to the future, and in this case there being Hope Tomorrow.

I like to have a story behind this series of the end of the world coming, and we've taken so much out of the earth that the population has to walk around with gasmasks on. The wings are purely for visual purposes and add little to the story. In this piece specifically it's how in the future birds and butterflies will be suspended on strings to remind us of past beauty. However one butterfly seems to have came to life and can breathe. Maybe there is hope tomorrow?

Whether it be a unique concept, or your own take on a popular theme, conceptual work is definitely an area to take your art. Adding your own details and associations can be fun and seeing the reaction from other people and what they read into it is interesting. Try simple concepts such as the seven deadly sins, or even a pack of playing cards, they can all give you inspiration. Have you created conceptual vector art before? Please share with us a link to your work!

InspirationVector
Did you find this post useful?
Yes No
Would you like to provide feedback (optional)?
Cancel Submit
Want a weekly email summary?
Subscribe below and we’ll send you a weekly email summary of all new Design & Illustration tutorials. Never miss out on learning about the next big thing.
Sign up