Most genres of books tend to have "styles" and "trends" that they follow, just like most other types of work such as web design; it becomes the norm to follow these trends. Romantic novel book covers tend be a bit cheesy and predictable. This post looks at a small selection of cheesy romance novel covers, and lists some essential elements for if and when you ever find yourself designing one of your own!

Essential Element #1: Use of Script and Decorative Typefaces

The use of script and elegant typefaces in romantic novel book covers adds that little touch of femininity to the design, and immediately suggests the book is aimed at females, suggesting the novel is based on romance and love.

Real Men Do It Better

Tip: Use high-quality, unique typefaces to really pull this essential element off. Premium fonts don't have to cost an arm and leg; a great place to look is at the Elegant and Script categories on MyFonts.com.

Until There Was You

Real life photographs tend to be much cheaper to produce than illustrations, although does involve finding both models and a photographer. It is however a great way to attract certain audiences, and really helps to give off an impression of the book, cheesy or not!

Using photographs on your book covers also helps to implant an image of the characters into the readers head; whether this is a good or bad thing is dependant on the reader - I guess this totally depends on how good their imagination is!

Tip: It's always a good idea to back your typography up against a solid (or near solid) color, instead of placing it over the photograph itself. It improves the readability by a long way!

It's clear that for a romantic novel cover to sell (at least by the look of things, as you can see from the amount of semi-nude men in this showcase!) men with bulging six packs is an absolute must - seriously, don't miss this one out, it clearly works wonders! ...Unless of course every single one of the books showcased in this article doesn’t sell, which is highly unlikely!

Asides from the slightly high level of cheesiness this is actually a rather good technique to use. It suggests that the books are aimed at women, which essentially helps to increase sales.

What A Woman Wants

Tip: Use cropped images to really help define the viewers focus on those rather toned muscles - you'll notice from a lot of the examples in this showcase show a mans body, and a mans body only; rarely do we see eyes (or a face at all for that matter) or legs belonging to a male!

Although all these book covers are virtually based on photographs, there is still room for a little bit of minimalism! The below example, "Swing" by Opal Carew is the most minimal, simplistic example in this article, leaving plenty of white space for your eyes to magically wonder into the focal points; the title, tagline and photograph of yet another well-kept male!

Tip: Also make use of a minimal color palette (photos obviously don't count) to really show of those photos. The below example uses just white, pink and a washed out, faded orange.

Essential Element #5: It's All About The Open Shirts...

Of course underneath these open shirts lives a rock-solid pack of abs just screaming to be let out. The open shirt suggests that the novel contains sexual activity, and probably lots of it. Once again, this element is aimed at the ladies in the audience, wondering what is hidden beneath the rest of that open shirt and wanting to see (or rather, read) more. 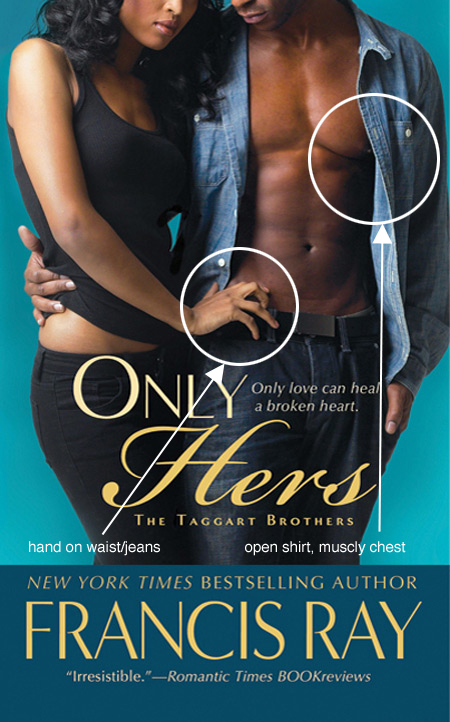 Notice how both the above and below example use the tip suggested in our third essential element (cropped images, hiding the mans face)? This just backs up that the point mentioned above about the books having a sexual theme is true.

Tip: The 'OS Technique (Open Shirt Technique)' seems to work in an even more effective way when complete with a beautiful woman.

This essential element is one that isn't used quite as much, with only two examples in this post - the below example "The Playa's Handbook" and an earlier example "What A Woman Wants". Once again this suggests a sexual theme, especially the below example with the male model standing further in the distance behind the laying female, who happens to be very relaxed, and wearing a silky white dress. Your suspicions are rising, eh?

Tip: This element works especially well when combined with the 'OS Technique' as mentioned in the previous element! Warning: Using the two combined heightens the cheesiness level a great deal, ultimately risking blowing the viewers mind away!

Just in case the cheesy models, powerful motorcycles and tattoos don't cut it for you, the tag lines even read "This man means business" and "Some men don't play by the rules". 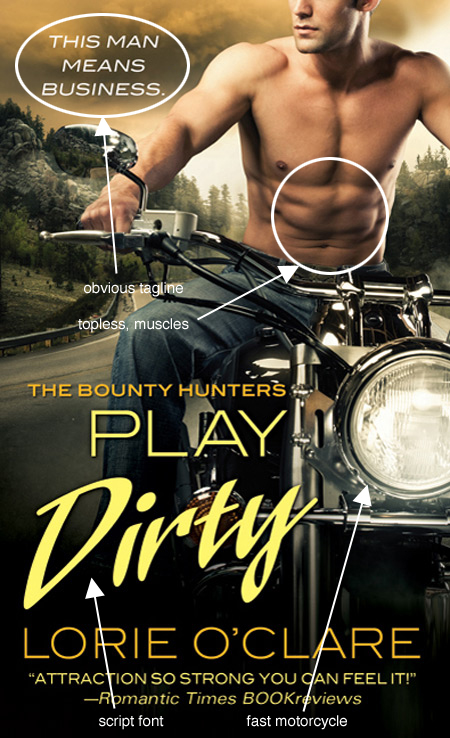 Tip: Highly edited photographs seem to work better here - try upping the contrast, reducing the brightness, and adding some photo filters to give your male models something a little bit more special.

This is more of an element that is aimed both at men and women, rather than just women alone. It suggests a sexual theme more than any other element listed in this article, mainly because the male in the photograph isn't the only one semi-nude!

Tip: Don't try this without a male - it is strictly a male/female combination only and simply won't have the same effect if it the woman alone.

Essential Element #9: A Flash of Leg!

Flashing of the leg, since the loss of human innocence, has always been something of a sexual nature, so there is no doubt here that it suggests a romantic/erotic themes alone, no matter when there is a 'buff' man laying on top of the woman!

This cover uses a combination of several elements noted in this article; the man has an open shirt, the cover is based on a photograph, there's a little hint of a script font, and it is rather minimal as well! This one deserves bonus points!

If You Were My Man 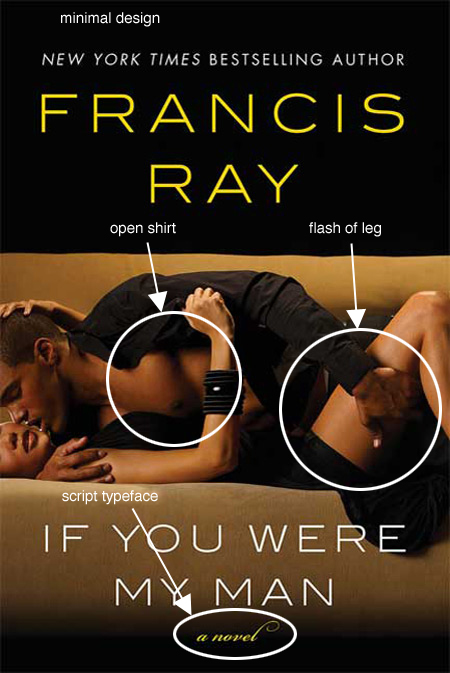 Tip: Once again, a cropped image will work wonders here - notice how we can't see the female models eyes or feet?

A very simple element, but one that is usually a great idea. Only some in this showcase this element, but it definitely helps to lower the tone sexual theme and increase the romance theme, making it appeal to those that want to make sure there is a great romantic story behind that cover! 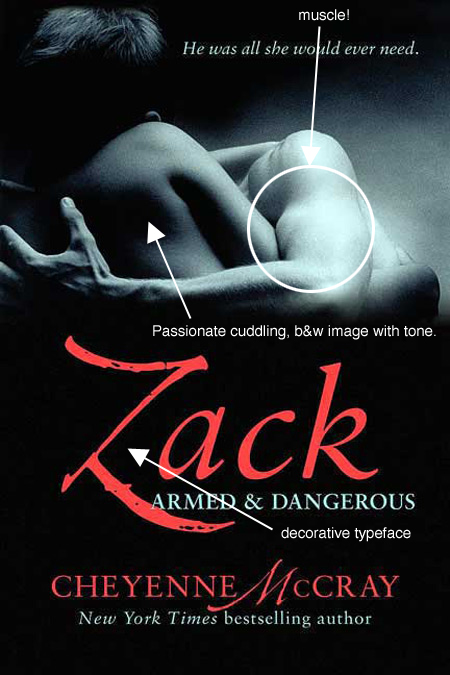 And there we have it, the top ten essential elements to a cheesy romantic/erotic book cover! Did we miss one out? What other elements do you think should be titled as essential? Let us know in the comments section below!

Callum Chapman
Callum Chapman is a self-employed blogger, author, graphic designer and illustrator. He is the founder of Circlebox Blog, and is also the founder & co-owner of DesignGiveaways.com, a design blog dedicated to giving cool products away! Drop him a line at Twitter!
Weekly email summary
Subscribe below and we’ll send you a weekly email summary of all new Design & Illustration tutorials. Never miss out on learning about the next big thing.
Advertisement
Translations